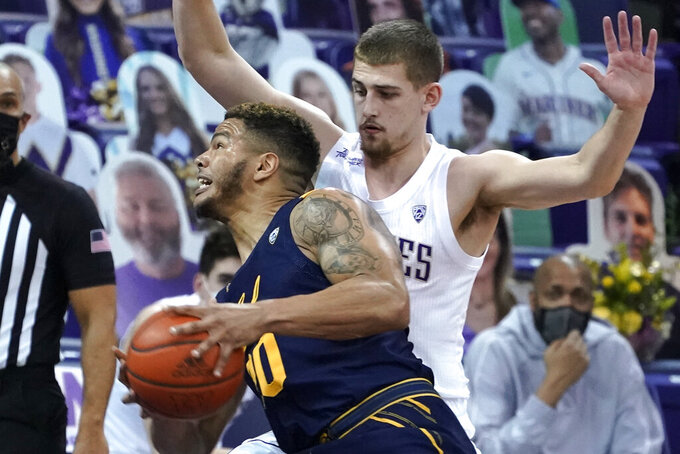 SEATTLE (AP) — Quade Green scored 17 points, Jamal Bey added 10 of his 15 in the second half, and Washington held off California 62-51 on Saturday night in a matchup of teams at the bottom of the Pac-12 standings.

Washington (5-17, 4-13 Pac-12) led by as many as 14 in the second half then held off every charge by the Golden Bears over the final 10 minutes to win for the second time in three games.

Green made 6 of 11 shots and grabbed six rebounds, while Bey also had nine boards. Marcus Tsohonis added 10 points off the bench.

"Today, we was passing the ball, everybody was touching the ball and we were (getting) open shots,” Green said. “I think that’s what the big key was.”

Matt Bradley led California (8-17, 3-15) with 13 points, but struggled from the floor. Bradley was just 3-of-16 shooting and missed all four of his 3-point attempts. The Golden Bears shot a season-worst 26.7% and went the final 8 minutes without a made field goal, missing their last nine shots

After knocking off Colorado last weekend, the Bears had a miserable trip north. They were routed by Washington State on Thursday, before having of their worst shooting performances of the season against the Huskies.

Washington’s biggest lead came at 42-28 with 14 minutes left after a 3-pointer from Tsohonis. Cal pulled within 45-42 with 9 minutes left, but Green answered with a 3 late in the shot clock to push Washington’s lead back to six.

Green added a key layup with 2:12 left to give Washington a 59-50 lead and California couldn’t make any of its open looks. California’s final seven points came from the free throw line.

“We were locked in on their personnel. Our defense was better tonight against them,” Washington coach Mike Hopkins said. “I thought there was some really good post defense. We did a good job on their 3-point shooters, knowing where they were, taking away their space.”

California: The Golden Bears offensive struggles were not limited to facing the Washington schools. California has failed to top 60 points in five of its past 10 games.

Washington: The Huskies honored their three seniors before tipoff — Green, Hameir Wright and reserve Travis Rice. Rice made the first start of his career and hit a 3-pointer in the opening moments. It was his second made 3 of the season.

Washington: The Huskies play at Arizona State on Tuesday night.