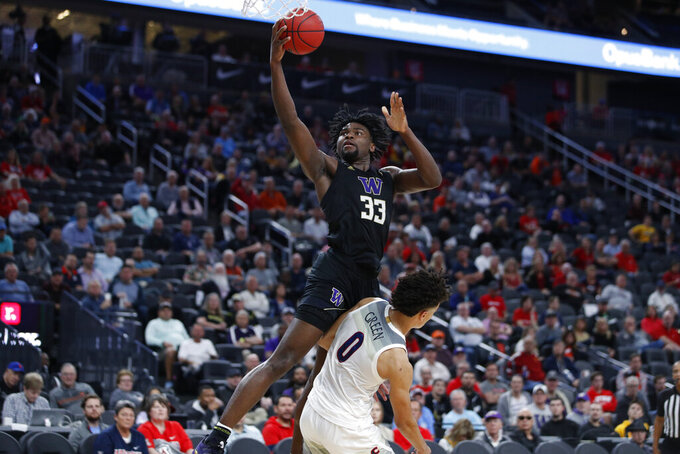 Washington's Isaiah Stewart (33) fouls Arizona's Josh Green (0) during the first half of an NCAA college basketball game in the first round of the Pac-12 men's tournament Wednesday, March 11, 2020, in Las Vegas. (AP Photo/John Locher)

SEATTLE (AP) — Washington freshman Isaiah Stewart declared for the NBA draft Wednesday after becoming a bright spot in an otherwise disappointing season for the Huskies.

Stewart was expected to leave Washington after one season even before he set foot on campus. He arrived to huge expectations that he would further Washington’s resurgence under coach Mike Hopkins but the team underachieved and suffered numerous painful close losses.

Stewart, a bruising 6-foot-9 forward, was named to the all-Pac-12 first team after averaging 16.6 points and 8.7 rebounds in the regular season, even while opposing defenses focused on stopping his interior game. Stewart also blocked 65 shots and averaged a team-high 32 minutes per game.

He is projected as a mid-to-late first-round pick in the June draft.

In a post on social media announcing his decision, Stewart wrote, “Thank you coach Hopkins for always believing in me. I can't express enough gratitude for the coaching staff that invested in my future and prepared me for the next level.”

The Huskies lost to Arizona in the first-round of the Pac-12 tournament and finished the season 15-17 overall.

“Isaiah exemplifies everything you want from a student athlete. He wears his heart on his sleeve, in the way he plays, how he interacts with the community, our fans and everyone he comes into contact with," Hopkins said in a statement. “As a coach, you want to see your players' dreams come true. His dream of playing in the NBA is becoming a reality."

Stewart is the latest on a list of one-and-done players for Washington that includes Markelle Fultz, Dejounte Murray, Marquese Chriss, Tony Wroten and Spencer Hawes.

There could be another name added to that list since freshman Jaden McDaniels could declare for the draft as well. McDaniels is also projected to be a first-round pick.