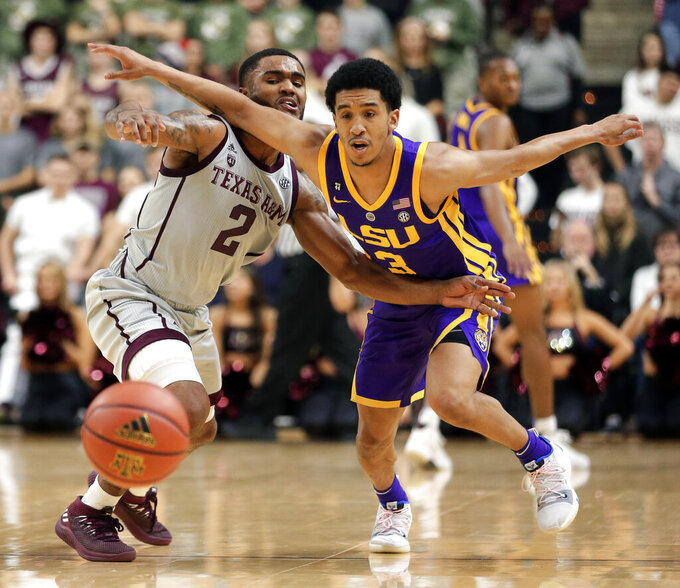 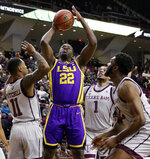 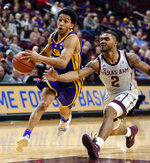 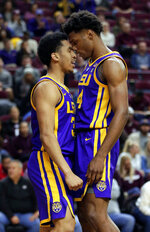 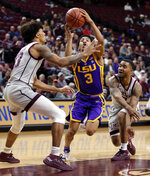 COLLEGE STATION, Texas (AP) — LSU coaches and players had been encouraging Tremont Waters to stop being hesitant and take more open 3-pointers in the days leading up to Wednesday's game against Texas A&M.

Waters took their advice to heart and it led to a huge night.

The sophomore scored a season-high 36 points and made a career-best six 3s in carrying No. 19 LSU to its 10th straight victory, 72-57 over the struggling Aggies.

"I've been working on them. I just let them fly and they were going in," Waters said. "Everyone told me to keep shooting so I put them up."

Waters was hot early, making five of seven 3-point attempts and piling up 23 points by halftime. He cooled down a bit after the break, but did enough to lead LSU (17-3, 7-0 Southeastern Conference) to its latest win on a night when much of the team struggled offensively.

It was the second straight time in College Station that Waters led his team with a big performance from behind the arc, after his off-balance 3 with 1 second on the clock helped LSU down then-No. 11 Texas A&M 69-68 last season.

"I guess he likes it here," LSU coach Will Wade said with a smile.

"He controls the game on both ends of the floor," Kennedy said. "Defensively he's disruptive and offensively he's a special player."

Skylar Mays, who had a career-high 24 points in an overtime win against Missouri on Saturday, missed his first nine shots for LSU, including seven 3s. He finally scored when he grabbed a steal and was all alone for a layup on the other end for his only points of the game with less than three minutes left to make it 70-55.

The Tigers led by three early in the second half before using a 10-2 run to make it 51-40 with 15 minutes to go. Naz Reid took over during that stretch, scoring seven points with a dunk and a three-point play.

A 5-0 run by Texas A&M, capped by a dunk from Wendell Mitchell, cut the lead to 56-51 midway through the second half, but Darius Days made a 3 to stretch LSU's lead. That was the first 3 for the Tigers by anyone but Waters, after the rest of the team missed their first 13 attempts from beyond the arc.

Javonte Smart added a layup after a turnover by TJ Starks to push LSU's lead to 10 once more, and the Aggies didn't get close again.

Kennedy was disappointed the Aggies let the game get away from them in the second half after keeping it close until halftime.

"Turnovers in the second half and our inability to keep them off the glass allowed them to control the game," he said.

The Tigers led by seven with about 2 1/2 minutes left in the first half before the Aggies used an 8-2 run to cut the lead to 37-36 at halftime. Josh Nebo scored four points in that stretch, highlighted by a soaring, two-handed dunk.

LSU: The Tigers played well enough to extend their winning streak, but will need to play better if they hope to keep it going with games against No. 22 Mississippi State, seventh-ranked Kentucky and top-ranked Tennessee remaining on their schedule.

Texas A&M: After several blowout losses in conference play already, the Aggies competed better on Wednesday, but still have a long way to go to find success in the tough SEC.

The 5-foot-11 Waters did more than just make 3s for the Tigers. He also grabbed a season-high seven rebounds and blocked a shot.

"I didn't go into the game saying I was going to get seven rebounds but the ball was just coming to me, so I just went and got it," he said.

Kennedy on the Aggies putting this loss behind them before Tennessee comes to town: "We don't have a whole lot of time to sulk. We've got to get past this and get ready."