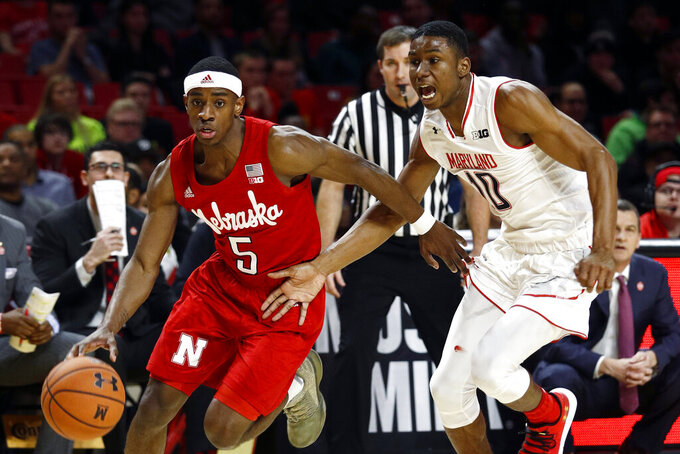 FILE - In this Wednesday, Jan. 2, 2019, file photo, Nebraska guard Glynn Watson Jr., left, drives past Maryland guard Serrel Smith Jr. in the first half of an NCAA college basketball game, in College Park, Md. Watson is the only remaining member of Nebraska’s five-man 2015 recruiting class who is still on the roster. (AP Photo/Patrick Semansky, File)

LINCOLN, Neb. (AP) — Glynn Watson Jr. stayed when everybody else from his recruiting class left.

Don't think the fourth-year starting point guard hasn't imagined how sweet it would be if Nebraska makes good on buzz around college basketball about the Cornhuskers finally having a team capable of not just making the NCAA Tournament, but also making a run.

Two years ago, that would have been silly talk. Losses were piling up, players were fleeing and coach Tim Miles' job status was in question.

"I believed in the coaching staff when we had down years," Watson said Wednesday night. "I'm not the type of guy to give up. I just wanted to fight with them. I just stuck with it. That's just me."

Watson was part of the five-man 2015 recruiting class ranked in the top 30 nationally, fourth in the Big Ten and advertised as Nebraska's best in at least 25 years.

"We have this one really cool picture of what I thought was a very good recruiting class, and those guys are smiling," Miles said. "Pretty soon, you turn around three years later, Glynn is the last man standing."

One of Watson's classmates transferred after the first season, two more followed the next year, and a fourth left to play pro ball in Australia after last season.

Watson said a couple schools approached his high school and AAU coaches — never him directly — about whether he would be interested in transferring two years ago.

Seeing what was going on around him, Watson did consider leaving, but only briefly.

"When I thought about it, I liked where I was at with this team," he said. "I know we didn't have the best first two years. But we can make a change, and I want to be a part of it."

Nebraska bounced back to win 22 games last season, largely because of the addition of transfers James Palmer and Isaac Copeland and the development of Isaiah Roby. The Huskers won a school-record 13 conference games, good for fourth place in the Big Ten, but they didn't get selected for the NCAA Tournament.

Watson went into the offseason determined to improve after shooting just 29 percent on 3-pointers. He's up to 40 percent on 3s and increased his scoring average to 13.5 points and 3.9 assists per game. He also is playing the best defense of his career.

"I think he's an underrated guy, and I do think he gets lost in the shuffle some with national (exposure)," Miles said. "Let me tell you this: He is the straw that stirs the drink. He makes us go."

Watson scored 12 of his team-leading 15 points in the second half and finished with five rebounds and two steals in Monday's 66-51 win at No. 25 Indiana. The Huskers (13-4, 3-3) will need Watson at his best again on Thursday night when No. 6 Michigan State (15-2, 6-0) brings its 18-game Big Ten winning streak to Pinnacle Bank Arena, where Nebraska has won a school-record 20 in a row.

There is palpable excitement. Nebraska is No. 10 in the NET, the metric that replaced the RPI, and is as high as a No. 4 seed by NCAA Tournament bracketologists.

Yes, there is hope for the only power-five program that has never won a game in the NCAA Tournament.

Watson said he thought about that dubious distinction in June while he was driving to Lincoln from his hometown of Chicago and how this could be the team to break through with Palmer and Copeland returning to school instead of declaring for the NBA draft.

By the time he arrived Lincoln, he said, he was so excited that he sent Miles a text to let him know he was committed to making his last year his best year, for himself and the program.

Miles said he almost cried when he read it.

"You love every kid," he said, "but Glynn is a guy I want this to go well for. He deserves it."