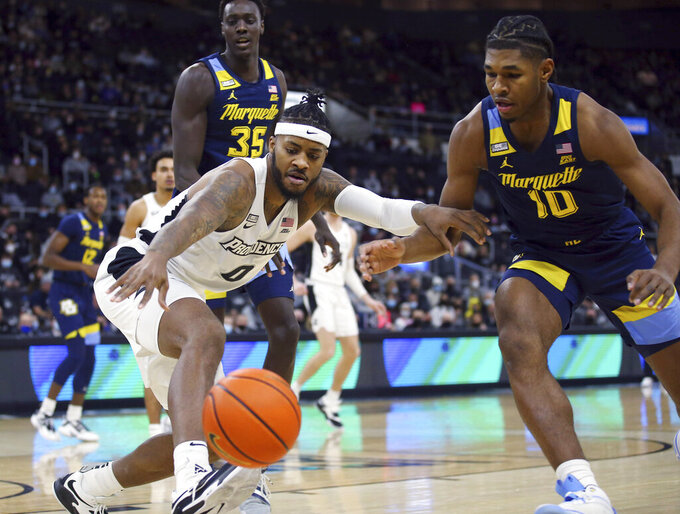 Providence's Nate Watson (0) and Marquette's Justin Lewis (10) go after a loose ball during the first half of an NCAA college basketball game Sunday, Jan. 30, 2022, in Providence, R.I. (AP Photo/Stew Milne) 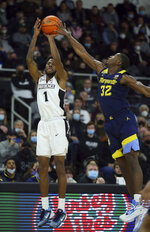 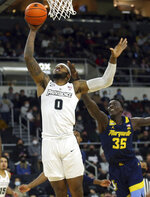 PROVIDENCE, R.I. (AP) — Nate Watson was fouled on a dunk and completed the three-point play in the final minute to help 17th-ranked Providence rally to a 65-63 win over 22nd-ranked Marquette on Sunday.

“As a leader it’s how you respond to adversity and I feel like I responded tonight," Watson said. "I didn’t really get a lot of touches. But I got to do what I got to do to score the ball and help my other teammates score. … I just hung my hat on doing the dirty work.”

Trailing by a basket with 14 seconds remaining, Marquette had a chance to tie, but Tyler Kolek came up short on his jumper and a putback layup by Justin Lewis trickled off the rim.

“We were able to get downhill, but Tyler didn't get an angle,” Golden Eagles coach Shaka Smart said. “Justin did a heck of a job going to get the rebound. We'll take that shot. We just didn't make it."

Providence held a 22-1 edge in second-chance points for the game.

Darryl Morsell had 14 points for Marquette. Lewis and Kolek both finished with 13.

The Friars' loss this month at Marquette was the first of five straight games they played without senior guard A.J. Reeves, who injured his left pinkie finger Jan. 1 at DePaul.

Reeves returned to action Sunday, but struggled to get involved offensively, going 2 of 9 and scoring six points in 19 minutes.

The Friars used a 9-2 run to erase what had been a nine-point deficit and tied it at 42 on a 3-pointer by Al Durham.

The lead changed six times over the next two minutes before a pair of free throws by Durham put the Friars back in front 61-60.

Lewis was fouled by Watson with 56 seconds showing on the clock and sank two free throws to nudge the Golden Eagles back in front.

On the ensuing possession Watson corralled a Horchler missed 3-point attempt, threw down a two-handed dunk and was fouled by Morsell. He completed the three-point play to give Providence the two-point edge.

Lewis was fouled on Marquette’s next trip down the floor but was only able to convert on 1 of 2 at the line.

Marquette fouled Horchler on the other end and he also hit only 1 of 2 at the line to make it 65-63.

The Golden Eagles dictated things on the defensive end early and took a 29-23 lead into halftime.

Marquette led by as many as eight, scoring eight points off 10 Providence turnovers in the opening 20 minutes, while holding the Friars to just 9 for 27 from the field.

The Friars showed impressive toughness to defend their home court against a team that outright embarrassed them earlier this month. That’s going to be huge for Providence heading into the final part of its conference schedule.

The Friars also won at No. 21 Xavier earlier in the week, so look for them to move up a few spots in the poll. Despite the loss, the Golden Eagles’ recent run shouldn’t drop them too far out of the poll.

It doesn’t get any easier for Marquette, which returns home to host 14th-ranked Villanova on Wednesday. The Friars hit the road for two straight, starting with a Tuesday night matchup with St. John’s.