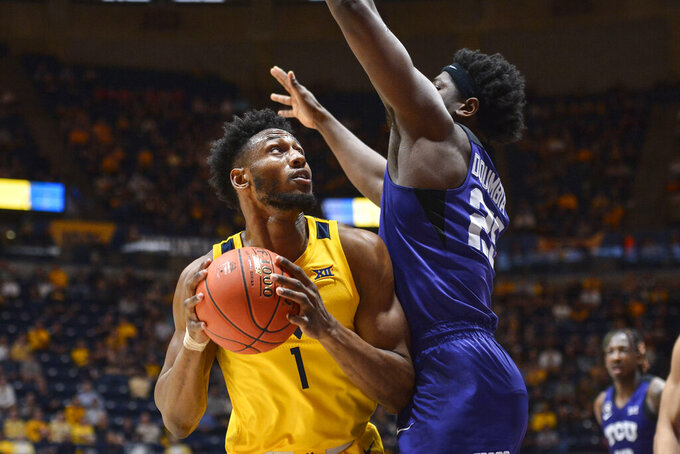 West Virginia coach Bob Huggins said his frustrations over watching his team make the same mistakes boiled over Thursday while studying film with his players. He pulled his freshmen out of the session and let them go practice their shots. The veterans had to stay in the room and figure it out for themselves.

Huggins was hoping his older players — some playing in their final home game — would double their efforts to finish the regular season strong.

Sherman was 9-of 17-shooting with three 3-pointers and another fifth-year player, Malik Curry, added 10 points for the Mountaineers (15-16, 4-14 Big 12). Senior Sean McNeil scored 10 points, including the clinching free throws, as did sophomore Jalen Bridges.

Mike Miles Jr. scored 17 points and Damion Baugh and Micah Peavy 12 each for TCU (19-11, 8-10), which took a punch to its NCAA Tournament resume by losing to a last-place Mountaineers squad that came in with 14 losses in its last 15 games.

Trailing 39-33 at halftime, TCU took its first lead midway through the second half with a 15-4 run. Baugh led the way with seven points as the Horned Frogs went in front 55-51 with the Mountaineers committing six turnovers during the stretch and looking like lessons hadn't been learned.

But after TCU's lead reached six, the Mountaineers recovered from their eight-minute lull, working back into a tie with four minutes remaining.

Neither team scored for over two minutes before West Virginia finished the final 1:47 by outscoring TCU 11-3, starting with Sherman making two free throws after a TCU offensive foul then scoring off a steal by senior Kedrian Johnson. McNeil sank four free throws in the final 11 seconds.

West Virginia never trailed in the first half after taking a 6-0 lead with five points from Sherman. The Mountaineers led by as many as 11 before the Horned Frogs got within two late in the half as West Virginia missed 11 straight shots. But Sherman added his third 3-pointer of the half and another fifth-year player, Pauly Paulicap, followed with a bucket to go back up by seven with a minute remaining.

Both teams, which split their regular-season meetings, head to the Big 12 tournament Wednesday through Saturday in Kansas City, Mo.