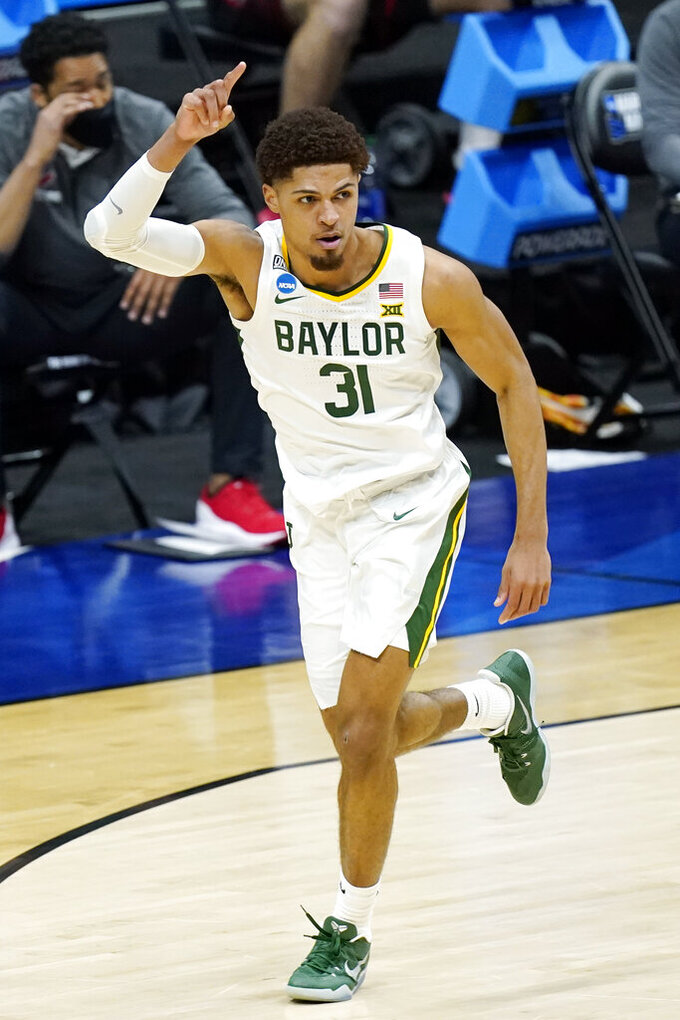 Baylor's MaCio Teague celebrates after scoring against Hartford during the first half of a college basketball game in the first round of the NCAA tournament at Lucas Oil Stadium in Indianapolis Friday, March 19, 2021, in Indianapolis, Tenn. (AP Photo/Mark Humphrey) 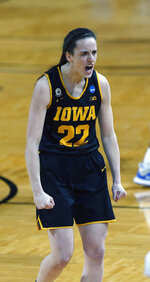 What to watch on Saturday at the NCAA tournaments in Indiana and Texas:

Villanova is seeking its third men’s national title in the last six years after winning it all in 2016 and 2018. The Wildcats have withstood a season-ending injury to point guard Collin Gillespie to get back to the Sweet 16. Baylor guards Jared Butler, Davion Mitchell and MaCio Teaue are averaging a combined 55 ½ points through the first two rounds.

This matchup features two of the most dynamic freshmen in the game and they happen to be good friends. UConn’s Paige Bueckers is just the third freshman to earn first-team honors on the AP All-America women’s team. Iowa’s Caitlin Clark, a second-team All-America pick, leads the nation in points per game (26.8), total assists (209) and total 3-pointers (112).

Men: The other men’s games include Loyola Chicago-Oregon State, Arkansas-Oral Roberts and Houston-Syracuse. … Oral Roberts’ Kevin Obanor is averaging 29.5 points in two NCAA Tournament games. That’s the highest average of any player remaining in the tournament. … The Oregon State-Loyola game marks just the second matchup between a No. 8 seed and a No. 12 seed in tournament history. No. 12 seed Missouri beat No. 8 seed UCLA, 82-73, in 2002.

Women: The rest of the women’s schedule includes Baylor-Michigan, North Carolina State-Indiana and Texas A&M-Arizona. ... Michigan is making its first Sweet 16 appearance. ... Texas A&M has produced plenty of suspense thus far in the tournament by squeaking past No. 15 seed Troy 84-80 and erasing a 12-point deficit to edge Iowa State 84-82 in overtime. The Aggies never led Iowa State in regulation and won on a buzzer-beater from Jordan Nixon, who scored 35 points. .