What To Watch: Michigan seeks to keep Big Ten alive in NCAAs 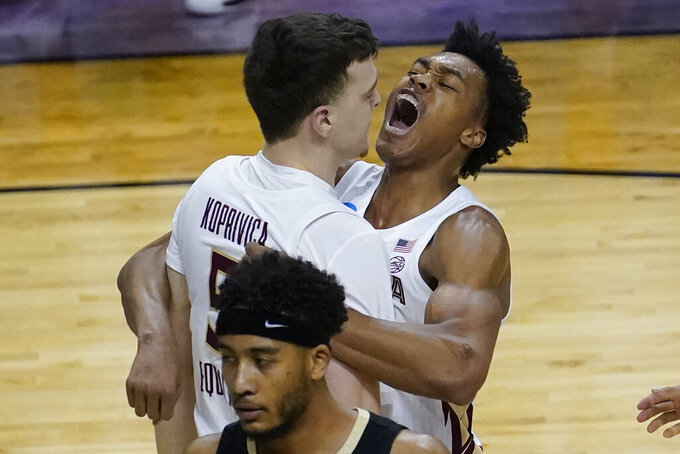 Florida State center Balsa Koprivica (5) gets a hug from teammate Scottie Barnes, right, after a dunk during the second half of a second-round game against Colorado in the NCAA college basketball tournament at Farmers Coliseum in Indianapolis, Monday, March 22, 2021. (AP Photo/Charles Rex Arbogast)

What to watch on Sunday at the NCAA tournaments in Indiana and Texas:

Oregon is seeking to reach its fourth straight regional final, while Louisville’s trying to get there for a third consecutive time. Louisville erased an 18-point deficit in its second-round victory over Northwestern. Oregon had lost five of six games heading into the NCAA Tournament, but has bounced back with wins over South Dakota and Georgia. Louisville’s Dana Evans is the Atlantic Coast Conference player of the year but shot just 3 of 18 from 3-point range in the first two rounds.

Women: The other women’s games include: Georgia Tech-South Carolina, Missouri State-Stanford and Texas-Maryland. ... Missouri State will try to improve its NCAA Tournament record against No. 1 seeds to 3-2. Its previous two wins against No. 1 seeds came in 1992 against Iowa and 2001 against Duke. ... Georgia Tech is in the Sweet 16 for only the second time. The Yellow Jackets also made it in 2012. ... Maryland leads the nation in scoring (91.8) and assist-turnover ratio (1.7). ... Texas’ Charli Collier is a potential No. 1 overall WNBA draft pick.