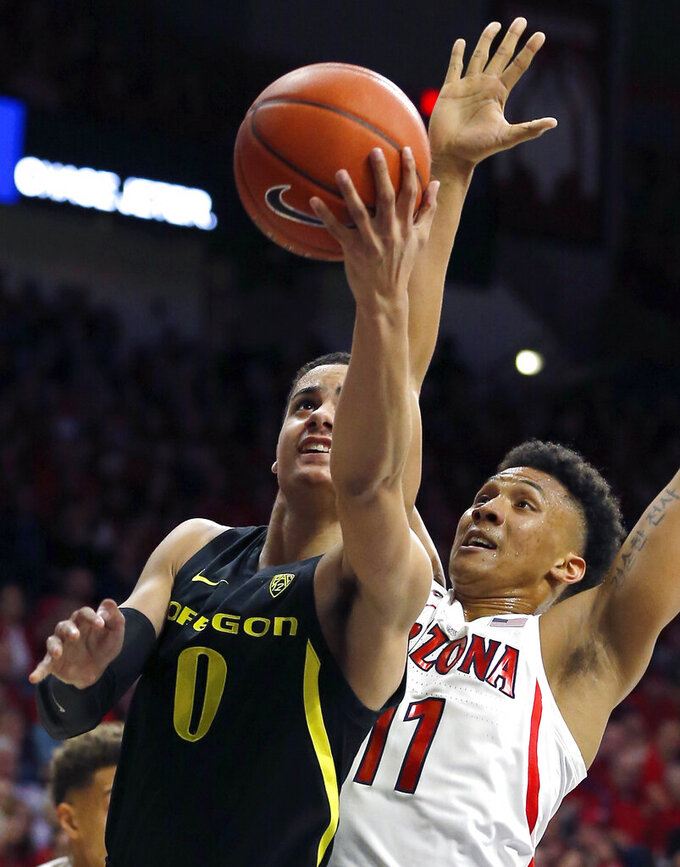 Oregon guard Will Richardson (0) shoots in front of Arizona forward Ira Lee in the first half of an NCAA college basketball game, Thursday, Jan. 17, 2019, in Tucson, Ariz. (AP Photo/Rick Scuteri) 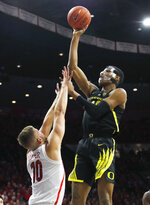 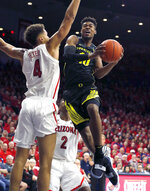 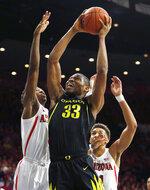 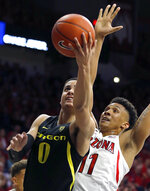 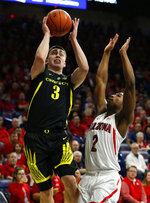 The once-fast Ducks have had to slow down in recent games due to a string of injuries, relying on their defense rather than outscoring opponents.

Oregon (11-6, 2-2 Pac-12) got Kenny Wooten back after missing four games with a broken jaw, though he played limited minutes and star freshman Bol Bol was on the bench in a walking boot.

The Ducks still stuck to their shut-them-down game plan, hounding Arizona (13-5, 4-1) into one miss after another while building a 13-point lead midway through in the second half.

The Wildcats found an offensive rhythm and pulled within 55-51 on Dylan Smith's 3-pointer with 1:24 left. Smith hit another 3 to get Arizona within 57-54 with four seconds left, but Payton Pritchard hit two free throws to seal it.

Chase Jeter led the Wildcats with 12 points and 10 rebounds.

Arizona took control of the early Pac-12 race after an uneven nonconference schedule. The Wildcats opened conference play with wins over Colorado and Utah at home and had a road sweep of the Bay Area schools last week.

The Ducks had a rough start to the Pac-12, losing to rival Oregon State and blowing an eight-point lead in the final 45 seconds of an overtime loss to UCLA. Oregon bounced back with a 21-point win over USC in one of its best all-around games of the season.

The Ducks were good on the defensive end against Arizona, holding the Wildcats without a field goal for nearly eight minutes while building a nine-point lead. Oregon held Arizona to 23 points, 8-of-27 shooting, including 2 for 11 from the 3-point arc and forced nine turnovers to lead by eight at halftime.

The defensive shutdown continued to start the second half. Arizona missed 11 of its first 12 shots and Oregon stretched the lead to 39-26.

After more than 30 minutes of struggling, the Wildcats finally found a way to solve Oregon's defense, trimming the Ducks lead to 45-41 with eight minutes left.

It didn't last. Arizona had a scoreless drought of more than three minutes and Oregon stretched the lead to nine, then held the Wildcats off down the stretch.

Oregon has turned up its defense at just the right time — outside of the UCLA game — to keep itself in the Pac-12 race.

Arizona had trouble with Oregon's length inside and struggled to get shots to fall from the perimeter in another uneven offensive performance.