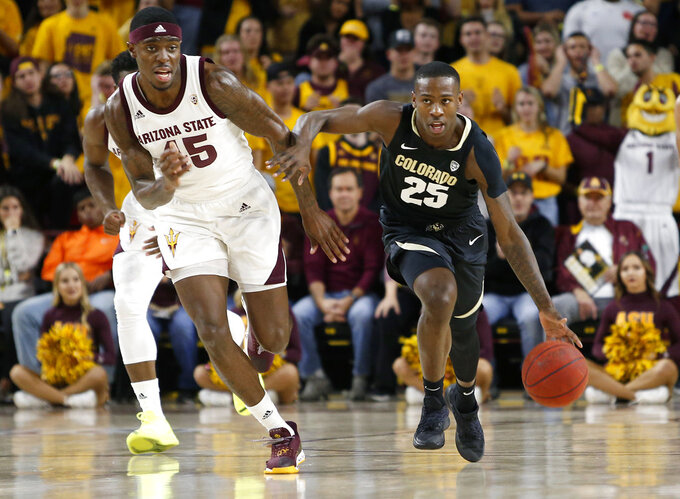 Colorado guard McKinley Wright (25) advances the ball up the court past Arizona State's Zylan Cheatman during the first half of an NCAA college basketball game, Saturday, Jan. 5, 2019, in Tempe, Ariz. (AP Photo/Ralph Freso)

TEMPE, Ariz. (AP) — Arizona State coach Bobby Hurley made the rare move of taking his two leading scorers out of the starting lineup. After turning a 17-point lead into a 10-point loss two days earlier, the Sun Devils needed a spark.

The shakeup turned into a wakeup.

Playing with much more energy at both ends of the floor, Arizona State bounced back from a disappointing loss with a resounding win, rolling over Colorado 83-61 on Saturday.

"We needed to change some things and just be better in certain key areas," Hurley said. "We just need to have a level of accountability."

The Sun Devils were great early against Utah on Thursday, out of synch the rest of the way in a disheartening Pac-12 opener.

The switch turned out to be just what the Sun Devils needed.

Arizona State (10-4, 1-1 Pac-12) moved the ball far better on offense to shoot 57 percent and smothered the Buffaloes early with an aggressive 2-3 zone.

The Sun Devils led by 18 at halftime and never gave Colorado (9-4, 0-2) a chance of a comeback, holding the Buffaloes to 33 percent shooting.

"This is the first game I felt we put 40 minutes together, playing together as a team, collectively all in the game," said White, who made 9 of 11 shots.

Colorado shot poorly in a loss to Arizona on Thursday and continued to clank away up the interstate in Tempe, going 5 for 26 from 3-point range. McKinley Wright IV had 12 points to lead the Buffaloes, who have lost four of five.

"We played against a desperate Arizona State team," Colorado coach Tad Boyle said. "I thought they played with kind of an edge and desperation that we didn't play with. I don't think our guys didn't compete. They tried. It's just right now we can't make open shots."

The Sun Devils appeared to have righted themselves after an unexpected home loss to Princeton to close out the nonconference season, jumping out to a 17-point lead against Utah on Thursday.

Arizona State fell back into its inconsistent ways after the midpoint of the first half, allowing too many open 3-pointers and baskets in transition, leading to a 10-point loss.

Hurley shook up his starting lineup and turned into just what the Sun Devils needed.

Opening in a 2-3 zone, Arizona State swarmed the Buffaloes, holding them without a field goal for nearly 6 1/2 minutes while opening on a 13-2 run.

"Our confidence definitely waves and it shows," said Colorado big man Evan Battey, who had seven points. "We didn't get shots to fall and lost our confidence."

Colorado saw a few shots go down later in the half, yet couldn't make up ground. Arizona State led 44-26 after holding the Buffaloes to 8-of-27 shooting, including 2 for 13 from the 3-point arc.

The Sun Devils continued the energy into the second half, crushing the Buffaloes with stingy defense and a series of transition dunks.

Arizona State got its mojo back on both ends of the floor, just in time for its first conference road trip of the season.

Martin has played fast, sometimes too fast, since returning from injury seven games ago. The sophomore got sped up against Utah after a strong start, but was in almost total control against the Buffaloes.

Martin didn't take a shot, but had eight assists with two turnovers.

"He really was a good floor leader," Hurley said. "Remy is going to find more balance and chances to score. There might have been a few he passed up, but he's got the right mindset to get his teammates involved.