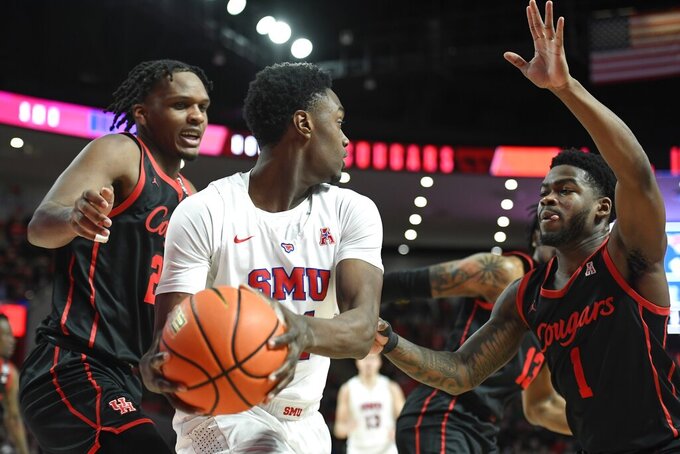 HOUSTON (AP) — Fabian White Jr. had 21 points and nine rebounds and Josh Carlton added 19 points and eight rebounds to lead No. 14 Houston to a 75-61 win over SMU on Sunday.

“We had an advantage inside with Josh and Fabian,” Houston coach Kelvin Sampson said. “The good news is that we exploited it. We tried to really attack them inside. … It was our game plan to get the ball inside and attack the offensive glass.”

Houston owned a 48-30 advantage in points in the paint, shot 45% and had a 49-25 advantage in rebounds in their fourth straight win. The Cougars also grabbed 21 offensive rebounds and turned them into 18 second-chance points.

“Sometimes you have to play to your identity,” Sampson said. “Our kids defend and rebound. We are not a great shooting team. We are kind of hit and miss at the free throw line. We are hit and miss at the 3-point line, but defensive rebounding is something that consistently we have been good at.”

SMU coach Tim Jankovich said Sunday’s game had a similar feel to SMU’s win over Houston on Feb. 9 where the Mustangs rallied from a 15-point deficit in the second half.

“It felt much the same except when it just became apparent that we just can’t get a defensive rebound,” Jankovich said. “Yes, offensively, we didn’t shoot the ball well. I give Houston a lot of credit. I thought their defense was outstanding.

“The game was rebounding. They dominated the boards. Every timeout, the last nine timeouts that’s all we were begging, and we couldn’t get it done.”

Houston has a two-game lead over the Mustangs for first place in the AAC heading into the final week of the regular season.

“Just win this game,” White said of the Cougars' mentality coming in. “This was for the conference championship. It's one versus two. Just try to win this game by any means.”

SMU cut the lead to 43-35 on a 3-pointer by Emmanuel Bandoumel with 16 minutes remaining, but the Mustangs got no closer than eight when Houston responded with a 15-2 run to increase its lead to 63-42 on layup by Carlton with 6½ minutes to go.

SMU: The loss hurts the Mustangs’ NCAA Tournament resume with two games left in the regular season. … The Mustangs scored a season-low in first half points with 22 and struggled shooting in the first half, making 33% of their shots and missing all eight of their 3-point attempts.

“We are disappointed, and it was a great opportunity, but we have a lot to play for,” Jankovich said. “We’re trying to finish as high as we can. We are trying to hold our home court streak (14-0 at home this season). We are trying to get a bid if the tournament doesn’t work out. … It’s not like this was an all or nothing game. There’s a lot of important basketball ahead.”

Houston: The Cougars helped their NCAA Tournament resume with the win. … Houston forced the Mustangs into 10 turnovers and turned it into 16 points. … The Cougars had 20 assists on 29 made field goals.