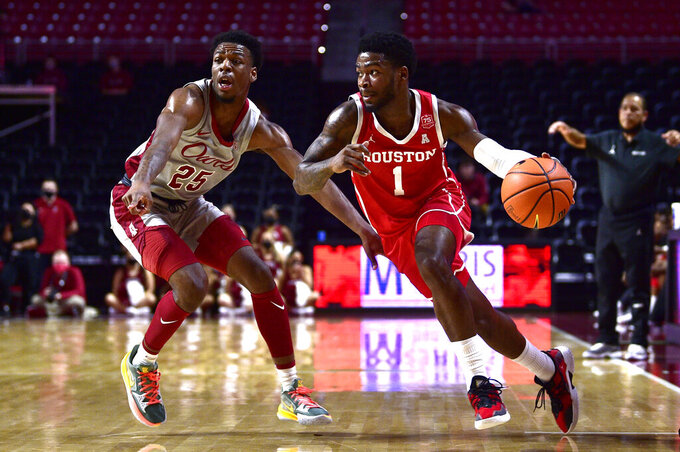 Houston's Jamal Shead, right, dribbles past the defense of Temple's Jeremiah Williams during the first half of an NCAA college basketball game, Sunday, Jan. 2, 2022, in Philadelphia. (AP Photo/Derik Hamilton) 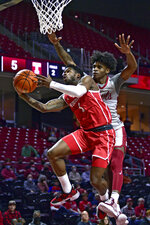 PHILADELPHIA (AP) — Ramon Walker Jr. was first buried on the depth chart and then sidelined with a hand injury, unable to find the playing time he wanted with a Houston team coming off of a Final Four appearance.

With the banged-up Cougars needing a big shot Sunday night, Walker delivered a 3 in front of his own bench to stretch No. 12 Houston's lead to five in the final minutes to help hold off Temple 66-61.

The stats looked good across the board for Houston (12-2, 1-0 American Athletic Conference). Fabian White Jr. had 15 points and 14 rebounds, and Jamal Shead scored 14 points. Walker added 13 points, none bigger than the 3 with 2:30 left.

But the most impressive numbers came in the minutes-played column: Four starters played at least 37 minutes and Shead, whom coach Kelvin Sampson called the game’s MVP, was in for all 40.

“By far, our best win of the year,” Sampson said.

“If this was a football team, I’d give everybody that played a ball,” Sampson said.

Walker, who had played only three games this season, returned at the right time from hand surgery to make his first career start.

“We’re fortunate that he was cleared and ready to play about the same time Tramon and Marcus went down,” Sampson said. “When we needed someone to step up and make a big shot, it was Ramon.”

The Cougars only used seven of the 10 players available against Temple (7-6, 1-1), which certainly won’t sustain the team through the meat of AAC schedule. Sampson was forced to use grad assistants and managers in practice over the last week with so many players out with injuries or in COVID-19 health and safety protocols.

Damian Dunn scored 14 points and Nick Jourdain had 12 for Temple, which made a run at an upset; FanDuel Sportsbook had the Cougars as 16½-point favorites on the road.

The Owls took advantage of Houston’s miserable 3-point shooting (4 of 22) to hang tight at home.

“I’ll take the effort. But it’s still a loss,” coach Aaron McKie said. “It’s something we can grow from. They are certainly one of the better teams in the country. But we wanted to make a statement and we didn’t make it.”

Had the Owls pulled off the upset, they would have the mildest of court-stormings. The Liacouras Center was nearly empty due to perhaps Temple’s winter break, concerns over COVID-19 or years of lackluster basketball. But the small, dedicated crowd stood and cheered when Jeremiah Williams turned a steal into a fastbreak layup that pulled Temple to 42-41.

“Later in the game, they wore us out a little bit getting to the glass and getting extra possessions," Dunn said. "That hurt us."

Houston: The Cougars are still the class of the AAC but can’t afford any more injuries if they want to make a run in the NCAA tournament. A second straight Final Four might be improbable for the Cougars without a healthy roster.

Temple: The Owls are still looking for a breakout year in McKie’s third season. Once the pride of Philadelphia under late Hall of Fame coach John Chaney, Temple has not defeated a Top 25 team in two years and hasn't been ranked in 10. With Houston hurting, this was Temple’s chance to get a signature conference win but instead the Owls lost to Houston for the fifth straight time. ... Jake Forrester (non-COVID-19 illness) and Tai Strickland (back) missed the game.

Houston: Hopes to have Edwards back when they play at South Florida on Wednesday.

Temple: Plays at UCF on Wednesday.