A whole different starting point for No. 19 Xavier 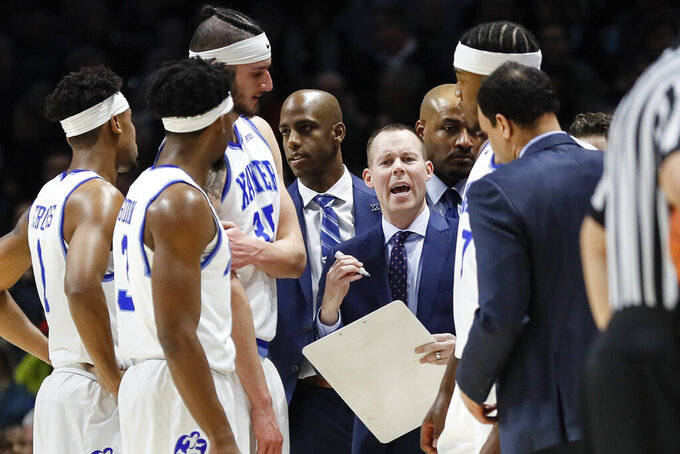 File- This Feb. 24, 2019, file photo shows Xavier head coach Travis Steele, center right, directing his players during a time out in the first half of an NCAA college basketball game against Villanova in Cincinnati. Steele made it through a rough first year as Xavier's coach, losing key players to graduation and injury. The Musketeers return their core players and are ranked No. 19 to start his second season. (AP Photo/John Minchillo, File)

CINCINNATI (AP) — Senior point guard Quentin Goodin dashed to the free throw line, received a pass and, without hesitation, bounced the ball inside to a forward breaking toward the basket for a layup. The simple move underscored Xavier's improvement in its second year under coach Travis Steele .

After getting through a difficult transition season with an inexperienced roster and injured starters, the Musketeers are back to being ranked and regarded as a threat in the Big East.

No. 19 Xavier returns four starters from a team that came together at the end of last season, led by Goodin and top scorer Naji Marshall. Unlike last season when they went 19-6 and 9-9 in the Big East, the Musketeers have a little bit of everything this time, including a deeper roster at every spot.

Players who were on the court a lot out of necessity will see minutes reduced as Steele uses his many options.

"Now all of a sudden we have this depth," Steele said. "We're going to have to figure out how to manage egos. That will be the challenge with our group, managing the personalities and getting these guys all together."

Last season, Steele had to rely on transfers to help him get through his first season after Chris Mack left for Louisville. Goodin — the top returning starter — suffered a major shoulder injury in preseason workouts, missed the first three games and was limited well into the season. Xavier lost six straight games to fall to 11-13 in mid-February, the low point.

Marshall led a run of seven wins in the last nine games to reach the NIT, where Xavier lost in the second round.

Last season, Steele had to back off defensively to prevent his thin roster from getting into foul trouble. That won't be an issue this time around. Junior guard Paul Scruggs and senior forward Tyrique Jones also return as starters.

"We will be able to play a lot faster, be more aggressive and create turnovers with our depth," Steele said. "At the same time, we have experienced guys coming back who learned how to close games. At the end of last year, we played with a lot more poise in end-of-game situations. That will really serve us well this season."

As a freshman, the 6-foot-7 forward got little attention from defenses that were more focused on Xavier's core of seniors led by Trevon Bluiett. He became the focus of opponents' defenses last season and struggled through the first half before figuring out how to handle the attention. He averaged 19.5 points, 14.5 rebounds and 4 assists in the two NIT games. Xavier is looking for him to extend the trend in his junior year.

Despite the shoulder injury, Goodin averaged 4.8 assists last season, third in the Big East. He's one of the reasons the Musketeers think they can be much better this season.

"Q's our calming influence," Steele said. "He started every game as a sophomore and every game last year other than when he was injured. To have a senior at that position, it goes a long way. He has the ability to make guys better."

Guard Bryce Moore from Western Michigan gives Xavier another perimeter threat — Xavier shot only 33% from beyond the arc last season. Forward Jason Carter from Ohio provides depth to a front line that had only two 6-foot-9 players last season.

Six-foot-9 forward Zach Freemantle impressed with his consistency in scoring and rebounding during preseason practices. Guard Dahmir Bishop will get playing time because of his shooting ability.

The Musketeers play four home games, including one against Missouri on Nov. 12, before heading to the Charleston Classic to face Towson in the opening round. They host crosstown rival Cincinnati on Dec. 7.