Wichita State quietly on rise as AAC begins to sneak up 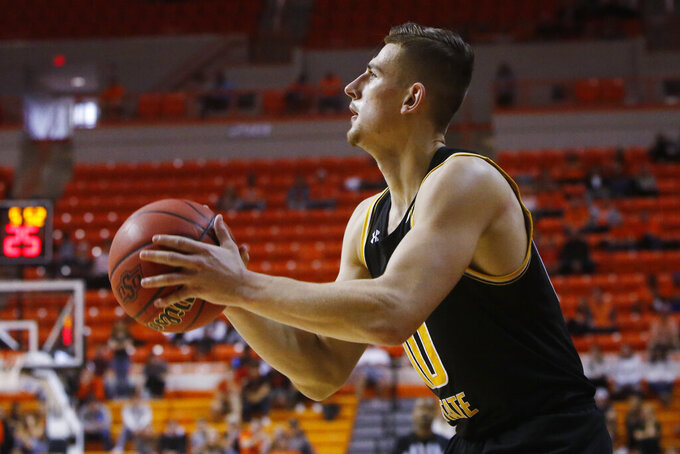 WICHITA, Kan. (AP) — It's getting more and more difficult for Wichita State to play the no-respect card this season.

The Shockers, who shot into the national consciousness during their 2013 run to the Final Four, have quietly rebuilt into a team that could challenge Memphis for the American Athletic Conference crown. They have knocked off a pair of Big 12 foes during a four-game win streak that has allowed them to climb into the first spot just outside the latest Top 25 poll, and it's quite likely that they'll finally break through before they head into league play.

But the game on everybody's radar is the matchup on Jan. 9 with No. 9 Memphis, a game that could help shape the rest of the conference race.

“The beauty of this team is there's a lot of interchangeable pieces. There are so many guys that can help us,” said Marshall, shortly after a road win over the Cowboys. "This was the Tyson Etienne game where he came out and shot well from 3. Jamarius Burton and Erik Stevenson were steadfast. They were so good in everything they did. JB with 11 assists and one turnover. I thought those two, especially JB, were the toughest guys on the court."

Being the toughest guys on the court is something that sounds familiar.

When the Shockers were rolling to the Final Four behind Cleanthony Early, they assumed a play-tough mantra that has stuck around for years. It was the same when Fred VanVleet and Ron Baker were leading the Shockers to a perfect regular season the next year, and when Wichita State added two more 30-win seasons over the ensuing two years.

It hasn't really disappeared, either. Nor have the Shockers, even though they may have fallen out of the public spotlight once they switched conferences from the Missouri Valley to the tougher American. Wichita State still went 25-8 and reached the NCAA Tournament its first year in the new league, and went 22-15 with a run to the NIT semifinals last spring. But it wasn't quite the same as when the Shockers had a weekly place in the Top 25.

After landing arguably his best recruiting class at Wichita State, Marshall has a team capable of beating opponents in nearly every way imaginable. Ten players average at least 10 minutes a game, nobody averages more than 13.2 points and the a team heavy on underclassmen plays with the selflessness of a bunch that has been around the block.

Stevenson has doubled his offensive output from his freshman season to become the Shockers' leading scorer, and Etienne has emerged as a dynamic do-everything guard as a freshman. Jaime Echenique leads a bunch of bruisers in the paint that come in such waves that it's difficult for opponents to avoid wearing down in the second half.

“What a difference a year makes going into Christmas,” Marshall said.

A year ago the Shockers had already lost five of their first 12 games, and they were run out of the gym by VCU in their final game before the holiday. They were also on the bruised side of an 80-48 romp at the hands of Oklahoma, a loss that they avenged at their downtown Wichita home-away-from home.

They found most of those missing pieces late in the season, when they won 11 of their final 14 games to sneak into the NIT field. Then they played well in a series of games that helped to set the table for this season, when Etienne and the rest of the Shockers' freshman class arrived to give them the elements that they were missing.

They won their first six games, including a blowout of South Carolina, before falling to West Virginia in a competitive game in the championship matchup of the Cancun Classic.

“The game versus West Virginia taught us all we have to play harder and smarter,” said sophomore Jamarius Burton, who had 10 points, eight boards and five assists in the Shockers' recent win over VCU. “Ever since then we've been rolling, just playing harder and smarter and trying to be the tougher team.”

After games against Abilene Christian and East Carolina, the Shockers back out of conference play to face Ole Miss in early January. But then comes a visit from Penny Hardaway and the ninth-ranked Tigers, an early showdown between what are turning out to be the class programs of the American Athletic Conference this season.

“This time last year we were just kind of floundering into Christmas, if you will, with our tail between our legs after getting dismantled in Richmond,” Marshall said. “And the beautiful thing is we may be just getting started.”