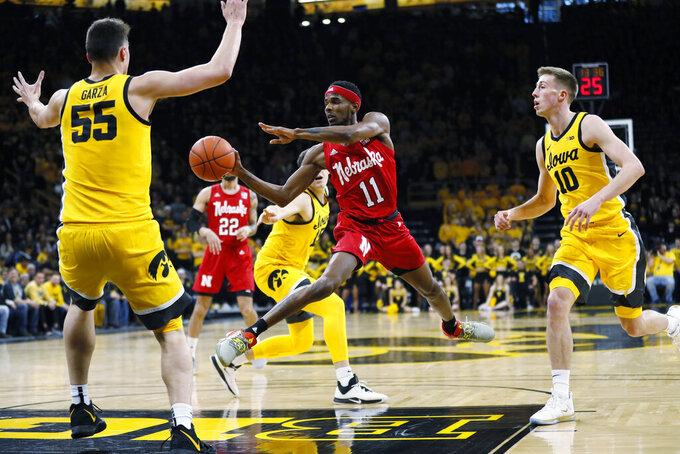 IOWA CITY, Iowa (AP) — Joe Wieskamp averaged 30 points per game in his final two high school seasons. Getting to that number in a game in college was something the Iowa sophomore guard hadn’t done in his career.

Which is why teammate Luka Garza said he was pushing him to get there on Saturday.

Wieskamp did, scoring a career-high 30 points in the 17th-ranked Hawkeyes’ 96-72 win over Nebraska.

“My teammates, Luka and all of those guys, did a great job of finding me,” said Wieskamp, who was 10 of 15 from the field. “They just encouraged me to keep shooting.”

“Everyone was focusing on how he didn’t make threes,” Iowa coach Fran McCaffery said, noting how Wieskamp attacked the basket in that game.

It was something Wieskamp did in the repeat matchup against the Huskers.

“He’s a guy that will just keep coming at you,” McCaffery said.

“Wieskamp was incredible,” Nebraska coach Fred Hoiberg said. “We did not do a good job of closing out to him, he got around us, got confident.”

Garza and Wieskamp came into the game averaging a combined 38 points per game, the sixth-best scoring duo in NCAA Division I play. This was the ninth consecutive Big Ten game of 20 or more points for Garza, who leads the conference in scoring.

Iowa was coming off a 104-68 loss at Purdue on Wednesday, and guard CJ Fredrick said during Friday's media availability that the Hawkeyes were "embarrassed" after that defeat.

“The last two days, we’ve been itching to get out on the court and take it out on someone else,” Fredrick said.

“We really wanted to come out and make a statement tonight,” Wieskamp said.

Iowa, which made just 4 of 33 3-point attempts in a 76-70 loss to the Huskers on Jan. 7, made three 3-pointers in the opening 4 1/2 minutes on the way to an early 21-5 lead. But the Hawkeyes missed their next 11 shots, going scoreless for almost eight minutes. The Huskers couldn't capitalize, though, and Iowa led 41-30 at halftime after Fredrick hit an off-balance 3-pointer at the buzzer.

The Hawkeyes opened the second half with a 25-8 run to put the game away.

“We really hit them in the mouth with a big run, to kind of separate the game,” Wieskamp said. “I think that was huge for us.”

The loss at Purdue on Wednesday could knock the Hawkeyes down a few spots, but they should stay in the rankings with this win.

Iowa: The Hawkeyes kept pace with Big Ten leader Maryland, staying two games back while moving into a tie with Michigan State for fourth place.

Nebraska: It was the eighth consecutive loss for the Huskers, who play Maryland, Wisconsin, Michigan State and Illinois in its next four games.

Nebraska: The Huskers play at No. 9 Maryland on Tuesday.

Iowa: The Hawkeyes play at Indiana on Thursday.