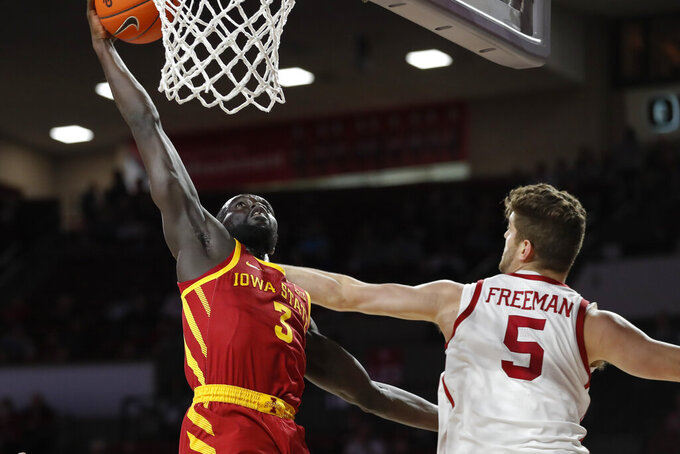 NORMAN, Okla. (AP) — Iowa State got an offensive spark off the bench and saw its leading scorer come alive when he was needed, and that was just enough to earn another road victory.

Lindell Wigginton scored 17 points to help lead No. 17 Iowa State to a 75-74 victory over Oklahoma on Monday night.

Shayok, who shot just 2-of-7 for six points through the first 32-plus minutes, also had eight rebounds and five assists as the Cyclones won their fourth straight. They are now 3-1 in their last four road contests, with wins at then-No. 8 Texas Tech and then-No. 20 Mississippi in that span.

"This is a great win for us, I'm really proud of our guys," said Iowa State coach Steve Prohm. "Fortunately, we made plays down the stretch. I thought Lindell shot the ball really well tonight, made big plays offensively. Off the bench, he was a huge difference for us. And Marial really made some big, tough plays for us down the stretch, made free throws. It's a great win. Really happy for our guys."

Both teams were dealing with short turnarounds, having each played on Saturday, then traveling to Oklahoma.

Kristian Doolittle had 19 points and nine rebounds, while Brady Manek scored 16 for Oklahoma (15-8, 3-7), which has lost three in a row.

"Very disappointing to not win it, but I think we took some steps in understanding that, number one, we got to get better, and number two, we can," said Oklahoma coach Lon Kruger. "Individually, I think Doo's doing an unbelievable job, Brady's shooting it well. We just got to keep working on it."

Iowa State led for most of the second half, going up 64-57 with 5:49 remaining when Wigginton hit two free throws. But Oklahoma battled back, going on a 12-5 run over the next four minutes to tie it 69-69 on Christian James' layup with 1:51 to go.

The Cyclones pushed the lead to four on Talen Horton-Tucker's free throw with 13.5 seconds left. After Doolittle's basket pulled OU to within two again with 4.2 to go, Shayok sank two more free throws with 3.5 seconds remaining before Jamal Bieniemy hit a meaningless 3-pointer as time expired.

"We kept plugging at it, we fought hard today," James said. "We got buckets when it counted, just a couple plays here, a couple plays there we didn't get our hands on the ball."

Oklahoma: The Sooners led 36-35 at halftime despite receiving seemingly minor contributions from two key performers, leading scorer Christian James and freshman point guard Jamal Bieniemy. James, who entered the day averaging 16.0 points per game and had hit double digits in points in 13 of the previous 15 contests, had just two points on 1-of-5 shooting, in the first half. Bieniemy had zero points (on just one shot attempt), one rebound and two assists, while committing one turnover in the opening half (after totaling 20 points, 11 rebounds, 19 assists and one turnover in the previous four games combined). James wound up with 10 points and Bieniemy had five, with one rebound and two assists.

A solid win over a conference opponent should help Iowa State keep its spot in the poll, and if some teams ahead of them lose, would allow them to move up.

Oklahoma led for the entire first half and had a 36-33 edge after Rashard Odomes sank two free throws with 1:34 left, but Iowa State scored the next eight points to go up 41-36 with 1:35 gone in the second half. The Cyclones were then able to maintain a small lead for the almost the rest of the game, before Oklahoma tied it once in the final two minutes.

Iowa State: The Cyclones return home to face TCU on Saturday, the first of two meetings against the Horned Frogs in a span of two weeks

Oklahoma: The Sooners remain at home to take on No. 18 Texas Tech on Saturday, for the second time this season, after losing a 66-59 decision on the road back on Jan. 8.