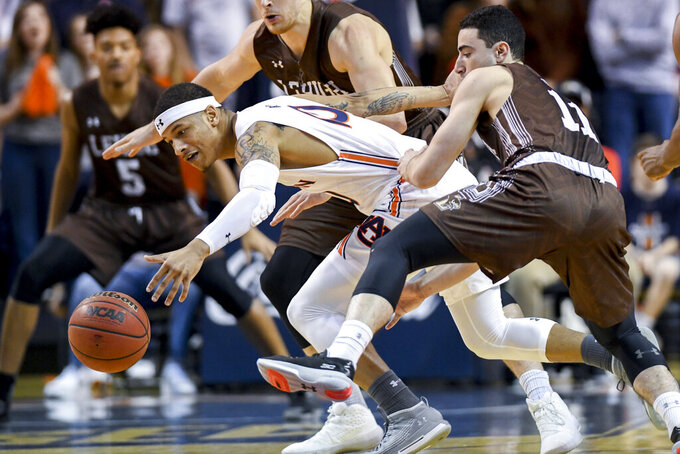 Lehigh guard Jordan Cohen (11) and Auburn guard Samir Doughty (10) chase down the ball during the first half of an NCAA college basketball game Saturday, Dec. 21, 2019, in Auburn, Ala. (AP Photo/Julie Bennett) 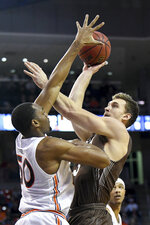 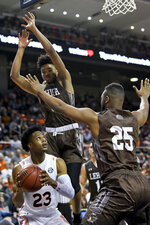 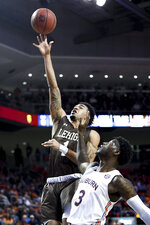 AUBURN, Ala. (AP) — Austin Wiley and undefeated Auburn muscled their way out of an early deficit Saturday night.

Wiley had 14 points and a career-high 15 rebounds, and the 12th-ranked Tigers beat Lehigh 74-51. Auburn (11-0) is the only unbeaten Power Five program and one of four undefeated teams in the country.

The Tigers worked through a sluggish start, trailing 20-13 before closing the first half on a 14-0 run.

“We just came out with a better energy,” Wiley said.

Auburn led 27-20 at the half and pulled away from Lehigh (3-8) from there. J’Von McCormick scored a team-high 18 points, hitting three straight 3-pointers down the stretch to put the game away.

“It just felt like I couldn’t miss,” McCormick said.

The 6-foot-11 Wiley out-manned Lehigh inside. Only James Karnik could stick with him at 6-9 — and only for stretches. Fellow Auburn big-man Anfernee McLemore added nine points. Tigers coach Bruce Pearl called them “a tremendous one-two punch.”

Jordan Cohen led Lehigh with 18 points. Evan Taylor had 13 and Karnik finished with 12.

“Unfortunately when they made plays and we went dry at the end of the first half, it made it difficult for us to battle back and fight through,” Lehigh coach Brett Reed said.

Auburn: The Tigers have won 23 of their last 24 games.

Lehigh: The Mountain Hawks dropped their sixth straight after a 3-2 start.

Wiley has four double-doubles in 11 games this season. He arrived at Auburn in 2016 as a blue-chip prospect with NBA aspirations before sitting out a season due to NCAA violations involving recruiting, extra benefits and agents. He's also struggled to stay healthy.

The senior center is averaging career highs in points (10.9) and rebounds (9.4).

“I try to impact the game every time I step out there,” he said. “I feel like there’s a whole other level that I could be playing at.

“I’m trying to play the perfect game, but I haven’t gotten there yet. So stay tuned.”

Auburn missed its first 10 shots from 3-point range, falling into a 20-13 hole. Samir Doughty finally hit Auburn’s first 3-pointer with just less than six minutes to go in the first half to make it 20-16.

Auburn was the NCAA’s leader in 3-pointers made last regular season, but that hot shooting has cooled after some major departures.

Auburn hosts Lipscomb on Dec. 29 in its last nonconference game before SEC play.

Lehigh plays at Princeton on Dec. 29.