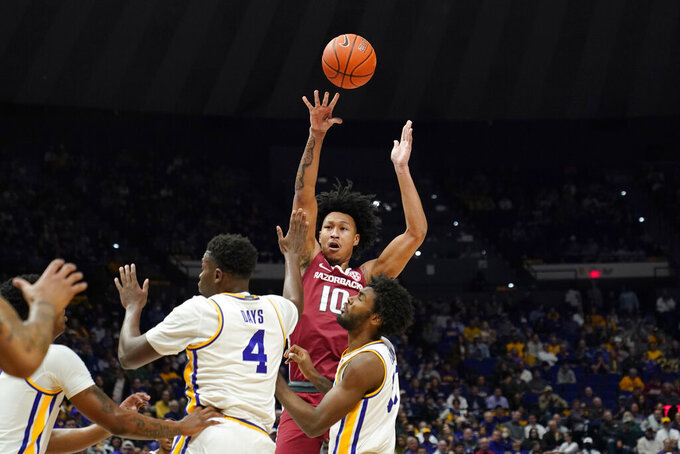 BATON ROUGE, La. (AP) — Jaylin Williams hit a tiebreaking 3-pointer with slightly more than a minute to play, sending Arkansas over No. 12 LSU 65-58 on Saturday.

Smart, who coached professionally for 22 years, joined the Arkansas staff this summer. Musselman is expected to also miss the Razorbacks’ next game against South Carolina.

Facing its largest deficit of the game at 56-48 with nine minutes remaining, Arkansas used defense to get back into it.

“When I called that timeout, I just told the guys to breathe,” Smart said. “Forget about what just happened and breathe. That really helped.”

“We were down eight points, but we still had a lot of time. Certain guys were going to make a big play or get a big rebound. That came to fruition today,” he said.

LSU missed four shots and and committed four turnovers as the Razorbacks went on a 10-0 run to take a 58-56 lead.

Williams, who had 11 points and 13 rebounds, made a wide-open 3 for a 61-58 lead. He then took a charge from the Tigers’ Brandon Murray on the ensuing possession.

After turnovers by both teams, Stanley Umdede's basket with 22 seconds remaining to make it a two-possession game. Au’Diese Toney added two foul shots to seal it.

JD Notae led the Razorbacks with 19 points. Toney had 12 points in Arkansas' first road win of the season.

“Arkansas made a ton of plays down the stretch,” LSU coach Will Wade said. “We turned the ball over too much and we got outrebounded. We missed some free throws. That is going to get you every time. We just weren’t as clean as we needed to be coming down the stretch.”

Notae’s 3-pointer with 3:29 remaining put Arkansas in front. The Tigers stopped their scoring drought on a dunk by Fudge that made it 58-all with 2:16 to play. Those were the only two points for LSU in the final nine minutes.

“We made aggressive plays at the end of the game trying to go to the basket,” Wade said. “It just didn’t go our way. We’ve got to be better. We were not at our best today.”

After LSU held a seven-point lead on three occasions in the first eight minutes of the game. Arkansas bounced back and tied the score at 18-18 on a basket by Notae with 8:59 before halftime.

Arkansas: After dropping their first three SEC games, the Razorbacks have put together back-to-back victories against Missouri and LSU.

LSU had relied upon its defense to jump out to a 15-1 record this season. But, Arkansas’ defense shut down the Tigers in the last nine minutes. Over that stretch, LSU missed eight of its nine field goal attempts and committed six turnovers.

The Razorbacks held the Tigers to 38% shooting overall. Arkansas forced 16 turnovers that resulted in 20 points. Williams, who made the 3-pointer to put Arkansas in the lead for good, made three steals.

LSU: Plays at Alabama on Wednesday.