Williams leads Memphis with 17 in 76-67 win over Vanderbilt 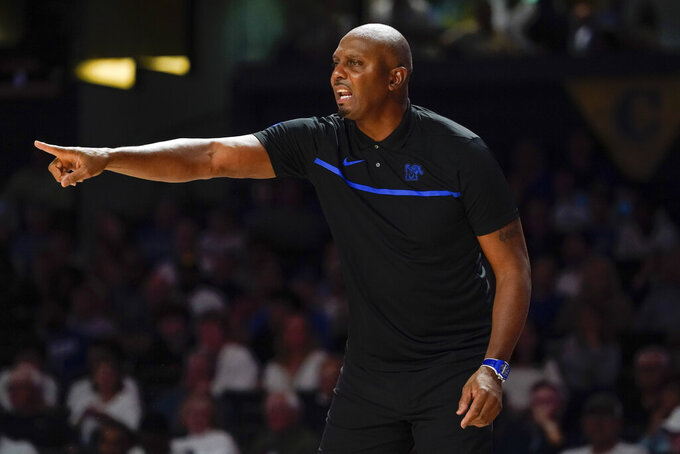 Memphis head coach Penny Hardaway yells to his players in the second half of an NCAA college basketball game against Vanderbilt Monday, Nov. 7, 2022, in Nashville, Tenn. (AP Photo/Mark Humphrey)

NASHVILLE, Tenn. (AP) — Penny Hardaway wants to prepare his Memphis Tigers for March by starting off the season with a tough road game.

He got just that in a sweltering Memorial Gym against a Southeastern Conference team coached by a fellow former NBA All-Star in Jerry Stackhouse.

DeAndre Williams scored 17 points, and Memphis never trailed in routing Vanderbilt 76-67 in the season opener for both teams.

“I've never believed in playing the smaller teams early to try to boost it,” Hardaway said. “I've always tried my best when I could control the schedule to play some tough games early. Last year we lost four games in a row. That was extremely tough, and it was big lesson for me. But we finished strong."

These Tennessee programs separated by about 200 miles hadn't played each other since 2005, and credit for scheduling the 14th game between these teams goes to the coaches. Memphis won its first true road game in a season opener since beating Chaminade in November 1988.

That was the start of Hardaway's last season with the Tigers as a player. Now the Memphis coach and his Tigers just ended an NCAA Tournament drought with their first berth since 2014 last March. Stackhouse coached Vanderbilt to its first winning season since 2016-17 and to the NIT quarterfinals.

“Jerry's done a phenomenal job,” Hardaway said of a gym that had plenty of Memphis fans on hand. “To have the fans travel reminded me of old times and at the end when they were chanting for us that just brought back good memories.”

Hardaway has a very experienced team adding six Division I players through the portal. His starting lineup featured seniors or fifth-year players led by Kendric Davis, the reigning American Athletic Conference player of the year. He added 16 points, and Alex Lomax had 10 points and 10 rebounds for his first career double-double.

Tyrin Lawrence led Vanderbilt with 14 points, and Myles Stute had 12.

“That’s what we wanted to do to start the season off against a really good team and to really measure ourselves and see where we need to improve and where we need to get better," Stackhouse said.

Memphis opened with a layup by Williams, and Alex Lomax added a jumper in the first minute. Stute answered with a 3, but that was as close as Vanderbilt would get. The Commodores went 2 of 14 outside the arc as Memphis just kept scoring with dunks, layups and short jumpers.

The Tigers led by as much as 28-11 before taking a 34-22 lead into halftime. They pushed that to 49-30 in the opening minutes of the second half. Vanderbilt's best run came when Trey Thomas' 3 got the Commodores within 55-47 with 7:06 left with Memphis going more than 5 minutes without a field goal.

Davis hit a pair of free throws, then Malcolm Dandridge added two more. Davis hit a 3 to end the Tigers' drought with 5:13 for a 62-47 lead.

Memphis: With the NCAA putting Memphis on three years' probation with a public reprimand in September, this was the Tigers' first game without the threat of punishment hanging over them.

“That cloud is not over us anymore, and things are starting to happen really good for us,” Hardaway said.

Vanderbilt: Stackhouse also went to the portal with his biggest additions Manjon from UC Davis to replace Scotty Pippen Jr. as his point guard. He also added forward Emmanuel Ansong from Wisconsin-Green Bay. ... The Commodores went 2 of 14 beyond the arc in the first half but 10 of 16 in the second. ... Ansong hit the court hard on a foul late in the second half and stayed on the court for a few minutes before walking to the bench.

With Memorial having no air conditioning inside the main gym, Williams said he almost cramped up. Lomax called it the hottest gym he's played in since high school. Hardaway played here while in college at Memphis himself.

“It's the hottest gym in the country,” Hardaway said.