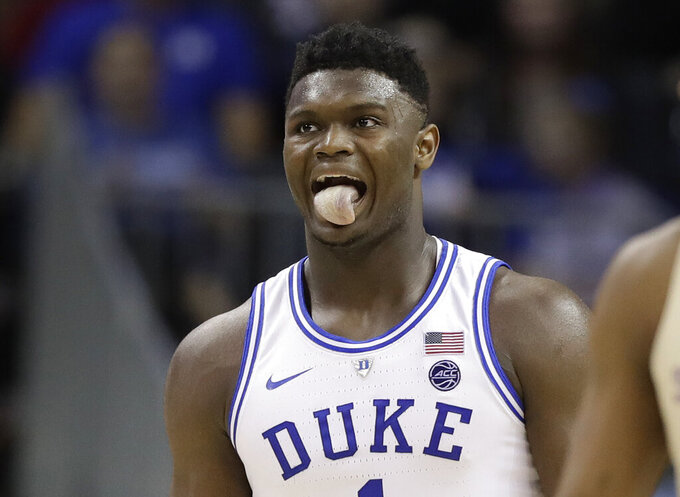 WASHINGTON (AP) — Zion's path to the Final Four goes through the nation's capital.

Zion Williamson and Duke are the overall No. 1 seed in the NCAA Tournament. The Blue Devils sit atop the East Region, and their road to Minneapolis could include matchups with ACC rival Virginia Tech — which beat Duke without Zion — and Big Ten champion Michigan State.

But with Williamson and fellow freshman R.J. Barrett on their games, it's worth wondering who will be able to keep up with the ACC Tournament champions.

"It's tough to determine what our potential is," coach Mike Krzyzewski said Saturday. "I just want to have us play as good as we possibly can play right now. ... I hope we're in this tournament for a long time — that will make us even better."

Krzyzewski hopes center Marques Bolden returns at some point in the tournament, which would give his team even more post depth to handle the likes of Michigan State if it came to that in the Elite Eight.

Duke opens the NCAA Tournament in Columbia, South Carolina, against the 16th-seeded winner of the First Four game between North Carolina Central and North Dakota State. A year after UMBC became the first No. 16 seed to upset a No. 1 seed when it beat Virginia, Krzyzewski knows not to overlook anyone.

"What I've learned along the way is not to be satisfied, not to rationalize," he said, "Because in these tough moments, rationalization can be the biggest opponent that you have at times."

Assuming Duke gets through the first round, eighth-seeded VCU or ninth-seeded UCF will be waiting. VCU star point guard Marcus Evans injured his left knee in the Atlantic 10 Tournament but is expected to return for the NCAA Tournament.

Here are some things to watch in the East Region:

SPARTANS' PRIDE: Michigan State held off rival Michigan to win the Big Ten Tournament and rolls into a matchup with 15th-seeded Bradley unsure of Ahrens' status. Guard Joshua Langford is already lost for the season, but the Spartans can still lean on Cassius Winston and strong rebounding. Michigan State has won 10 of its past 11 games and is one of the hottest teams in the country.

MORE INJURIES: Virginia Tech's Justin Robinson tweeted Sunday he's ready to return after missing the past 12 games with a left foot injury. Virginia Tech opens the tournament against Saint Louis, which won the Atlantic 10 Tournament to secure an automatic bid.

BUBBLE IN: Temple was squarely on the bubble after losing to Wichita State in its first American Athletic Conference Tournament game Friday. But Fran Dunphy's Owls — four years after being the first team on the outside looking in — didn't have their bubble burst by Saint Louis' run or Oregon's Pac-12 Tournament championship. They will face Belmont on Tuesday for the right to be the 11th seed in the East and face sixth-seeded Maryland.

"I felt like we did enough to get in, but you never know in these situations, so we're just sitting and watching and hoping," Temple guard Shizz Alston Jr. said after losing in the AAC Tournament.

LSU WITHOUT WADE: LSU goes into the NCAA Tournament having won nine of 11, but coach Will Wade remains under an indefinite suspension after a report he had been caught on a wiretap talking with a person convicted of funneling money to the families of basketball recruits. LSU opens against 14th-seeded Yale, which beat Harvard to win the Ivy League Tournament.

MARYLAND, MY MARYLAND: If Maryland gets through Temple or Belmont and then LSU or Yale, it'll be playing a home game in the Sweet 16. Capital One Arena is just 12 miles from College Park and could be the site of rival factions of Duke and Maryland fans if the former ACC rivals both reach the third round.