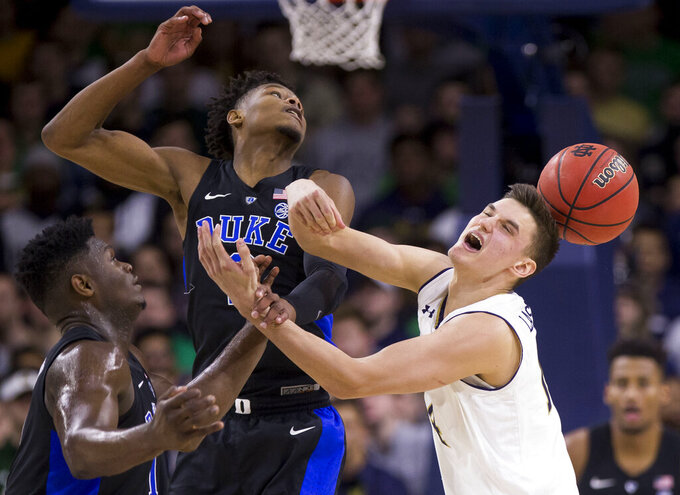 "What do you mean 'grounded'? So he doesn't jump, or what?" the Duke coach said Monday night, repeating a reporter's word used during a question about keeping the Blue Devils' freshman sensation level-headed.

"The kid's like one of the best kids in the whole world," Krzyzewski said. "No way (his head is going to get too big). I mean, he is so good, is such a great kid."

Williamson scored 26 points, grabbed nine rebounds and blocked four shots, and fellow freshmen RJ Barrett and Cam Reddish combined for another 30 points as No. 2 Duke rolled to an 83-61 victory over the Fighting Irish.

Williamson made 10 of 12 shots from the field for the Blue Devils, who were in control all the way.

Barrett tallied 17 points for the Blue Devils to go with nine rebounds. Reddish had 13 points.

"Our guys, the two games in three days (with) travel, you never know what's going to happen," said Krzyzewski, whose club was coming off a 13-point home win Saturday over Georgia Tech, "but our guys really handled tonight well. Proud of them."

John Mooney scored 14 points and grabbed 11 rebounds for the Irish. It was his seventh consecutive double-double, but he finished just 4 of 15 from the field.

Prentiss Hubb added 13 points, while T.J. Gibbs had 12 points and four steals, but they, too, struggled with their shots, going a combined 9 of 28.

"I told our guys I think we had the two best teams in the country roll through our building in the last (three) days," said Notre Dame coach Mike Brey, whose club lost 82-55 to No. 3 Virginia on Saturday.

"I like how we competed against this one tonight," said Brey, who had expressed disappointment in the effort against the Cavaliers. "Let's see if that can be a better habit for us. It's kind of been a habit for us — it was just disappointing Saturday."

The Blue Devils roared to a 17-2 lead in the opening six minutes, with Williamson scoring nine points during the spree, and were up 26-7 by the time 10 minutes had elapsed.

Notre Dame trimmed its deficit under double digits just once, at 32-23. The Blue Devils' immediate response to that was a 10-0 run over a span of 2:22.

Duke: The Blue Devils moved into sole possession of the lead in the hotly contested ACC for the moment by virtue of their seventh league win. No. 3 Virginia (6-1), No. 15 Louisville (6-1) and No. 9 North Carolina (5-1) each have one league loss as well, and all were idle Monday. Duke still has road assignments remaining against each of those other three clubs, plus a home date with the Tar Heels.

Notre Dame: Teetering at just over .500, the Irish are in danger of missing out on postseason for just the second time during coach Brey's 19 years in South Bend. ND has made 12 NCAA Tournament appearances and five in the NIT under Brey. The lone time his Irish were shut out of either was in 2014, when the team closed at 15-17.

While Notre Dame's young players aren't the recognized blue chippers that Duke's are, youth was decidedly the rule in Monday's game on each side. The Blue Devils, as is typical, started four freshmen, including Tre Jones, who in his second game back from an injury scored nine points and dealt five assists. The Irish started two freshmen, while neither team started a senior.

Of the 16 players used by the two sides in the first half — eight apiece — eight were freshmen and none were seniors.

Brey said he's hopeful that junior center Juwan Durham will be back by Notre Dame's next game. The 6-foot-11 Durham has missed the team's last three games while nursing an injured ankle. Durham is third in the nation and tops in the ACC at 3.2 blocked shots per game. He's also averaging 6.6 points and 4.3 rebounds in his 15.0 minutes per game over 15 appearances.

Duke: The Blue Devils step outside the ACC for one last time this regular season when they host St. John's on Saturday. The Red Storm are 15-5, but have lost four of five.