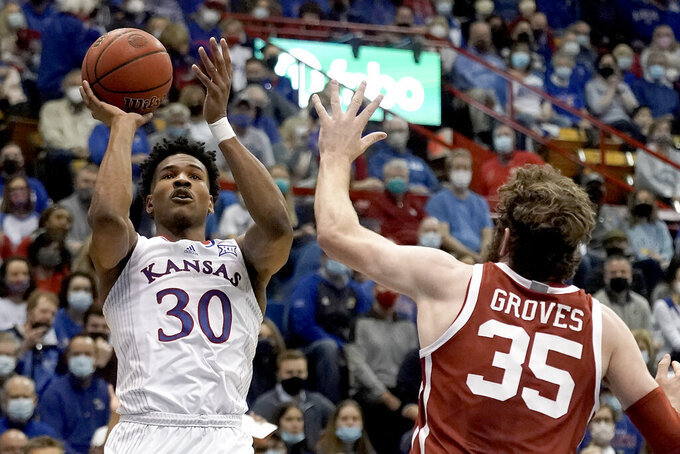 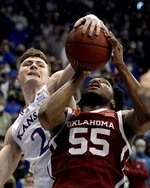 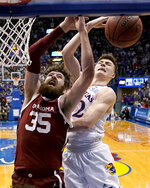 The Sooners closed to 70-69 before Wilson hit a free throw. Jordan Goldwire’s jumper in the last seconds caromed away for Oklahoma (14-11, 4-8).

“How about that? We had to win it about three times and then almost lost it,” Kansas coach Bill Self said. “We had one timeout left and I probably should have called it. I thought I’d save it in case something bad happened."

“Just don’t let them shoot a 3 and fortunately they had to shoot a hard two and missed. I thought we defended the last possession pretty well," he said.

Christian Braun had 18 points for Kansas. Ochai Agbaji and David McCormack each added 11.

Agbaji was held nearly 10 points below his season average of 20.3, best in the Big 12. Wilson and Braun knew they had to step up, especially in the second half.

“There was so much more energy,” Wilson said. “We were dead at the start of the game. The thing we do best is run. When we do that, it ignites everyone and gets the crowd going."

Goldwire had 20 and Tanner Groves 19 for the Sooners. Elijah Harless had 12 points and Jalen Hill had 10.

Groves hit four of his first eight 3-point attempts, but Kansas freshman Zach Clemence, who had missed six weeks with a broken toe, caused him to miss his last three attempts.

“He was the only big who could hedge a ball screen and get back to Groves,” Self said. “I thought our best chance to win was with Zach. I think he played a big role in us winning.”

Neither team got much production from its bench. Oklahoma had just eight points for its reserves while Kansas had only three.

McCormack's hook shot from the baseline with 14:23 left in the second half gave the Jayhawks a 46-45 edge, their first lead since 11-9. Oklahoma pulled away again by five points, but Clemence hit a 3 with 7:01 left to give Kansas the lead — those were the only points off the KU bench.

Braun’s basket moments later gave Kansas a three-point lead. Agbaji hit the front end of a one-and-one and Braun hit a layup late in the shot clock, capping an 11-0 run and giving the Jayhawks their largest lead of the game at 63-57 with 3:50 left in the game. Oklahoma went nearly seven minutes without scoring a point.

Oklahoma took an eight-point lead and was up 34-31 at halftime.

Oklahoma: The Sooners had trouble with Kansas’ size. The Sooners were outrebounded 32-26.

Kansas: The Jayhawks maintained their half-game lead over Baylor at the top of the Big 12.