Winners and losers of the NBA's draft withdrawal deadline 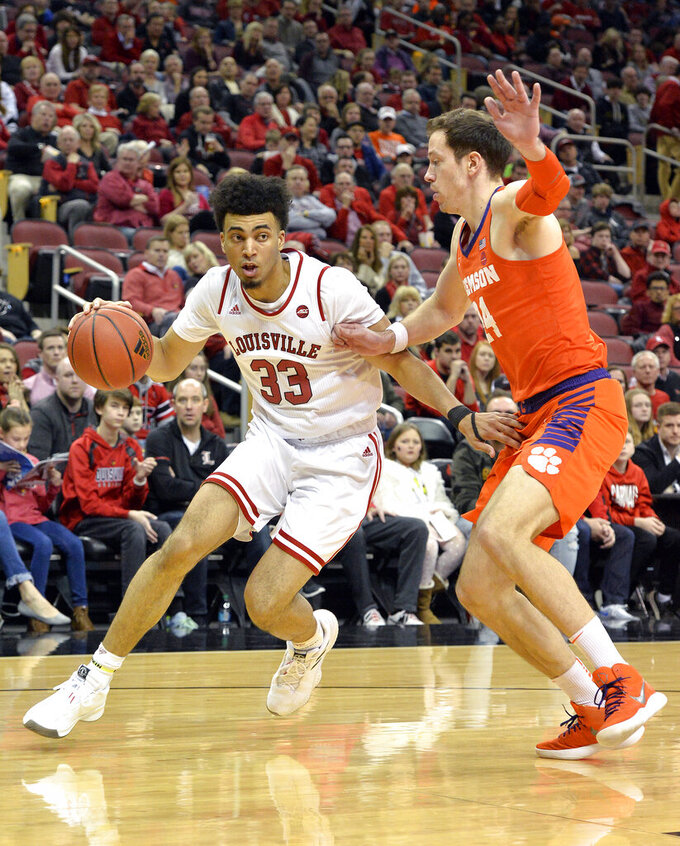 FILE - In this Feb. 16, 2019, file photo, Louisville forward Jordan Nwora (33) attempts to drive past the defense of Clemson forward Elijah Thomas (14) during the second half of an NCAA college basketball game in Louisville, Ky. The return of forwards Jordan Nwora and Steven Enoch could make the Cardinals a top-10 team heading into next season. (AP Photo/Timothy D. Easley, File)

Zion Williamson, Ja Morant and RJ Barrett all remained in the NBA draft through the withdrawal deadline.

No surprise there, nor for several other players expected to go in the first round.

Numerous other players faced difficult decisions on Wednesday, though, and the outcome of those could have a huge impact on the 2019-20 college basketball season.

A rundown of the winners and losers of the NBA draft withdrawal deadline:

Ohio State: The Buckeyes were going to have most of their rotation back for Chris Holtmann's second season in Columbus. Kaleb Wesson's decision to return could make Ohio State a top-10 team next season.

Louisville: The return of forwards Jordan Nwora and Steven Enoch could make the Cardinals a top-10 team heading into next season. Nwora was Louisville's leading scorer and rebounder last season after averaging 17 points and 7.6 rebounds as a sophomore.

Xavier: The Musketeers had four players initially declare for the draft. All four decided to return. Naji Marshall did it early, and Quentin Goodin, Tyrique Jones and Paul Scruggs did it this week. That's good news for coach Travis Steele.

BYU: Yoeli Childs was expected to stay in the draft. The double-double machine's surprise decision to remain in Provo gives the Cougars a massive boost.

Tennessee: Coach Rick Barnes has some rebuilding to do after Grant Williams and Jordan Bone decided to stay in the draft. The Vols already lost senior Admiral Schofield.

Auburn: The Tigers may have a hard time matching their surprising 2019 run with Jared Harper and Chuma Okeke opting to stay in the draft. Auburn already lost Bryce Brown, Malik Dunbar and Horace Spencer to graduation.

Houston: Armoni Brooks' decision to remain in the draft will hurt the Cougars, particularly after Corey Davis Jr. decided to leave early as well. They were Houston's top two scorers last season.

Iowa State: The loss of Cameron Lard, Lindell Wigginton and Talen Horton-Tucker to the NBA draft leaves coach Steve Prohm with some holes to fill.

Georgia: Tom Crean's crew will be young after forward Nic Claxton opted to remain in the draft and four seniors already were on their way out.

Kansas: Guards Devon Dotson and Quentin Grimes announced they were withdrawing their names from the draft, giving the Jayhawks two key returning players to go with Udoka Azubuike and Silvio De Sousa. Well, at least they thought. Shortly after saying he was returning, Grimes announced he would transfer from Kansas.

Gonzaga: The Bulldogs took a big hit with the decisions by Rui Hachimura, Brandon Clarke and Zach Norvell to leave school early. Mark Few and crew got a big boost at the withdrawal deadline when forwards Killian Tillie and Filip Petrusev decided to stay in Spokane.

Duke: Williamson, Barrett and Cam Reddish all remained in the draft as expected. So did Marques Bolden, hurting the Blue Devils up front. The decisions by point guard Tre Jones and forward Javin DeLaurier to remain in Durham gives Duke a chance to make another deep March run.

Michigan: The Wolverines will enter their first season without John Beilein in 13 years missing three key players who are leaving early. Charles Matthews, Jordan Poole and Ignas Brazdeikis are out, leaving new coach Juwan Howard with a little rebuilding to do.