Winston leads No. 8 Michigan St to 74-58 win over Minnesota 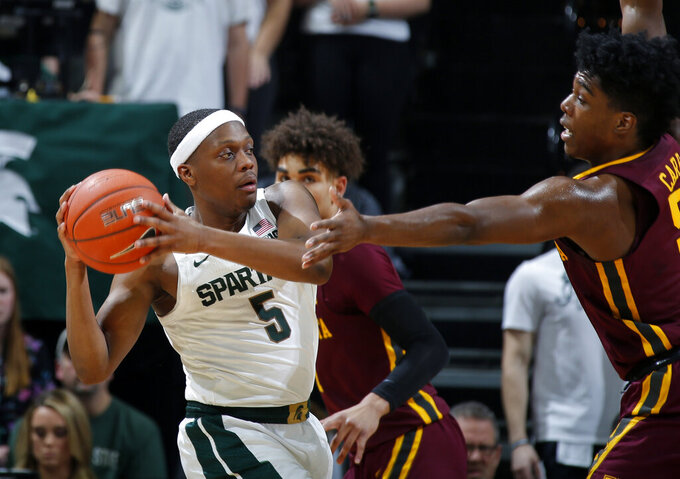 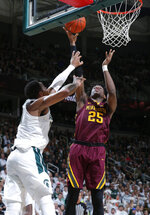 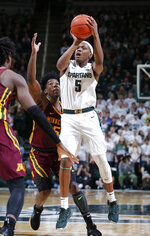 Cassius Winston made sure the Spartans made up for that.

Winston scored 18 of his 27 points in the second half while Xavier Tillman finished with 19 points and a career-high 16 rebounds, leading Michigan State to a 74-58 win over Minnesota on Thursday night.

The senior star made more than half his shot attempts after halftime after he was 2 of 8 in the first half.

“I wasn't forcing it as much and was playing a little more free," Winston said.

The Spartans (13-3, 5-0 Big Ten) led by just four points at halftime before pulling away for their eighth straight victory, staying atop the Big Ten standings as the only team without a conference loss.

Michigan State coach Tom Izzo was very unhappy after the first half and let his players know it in the locker room.

The Golden Gophers (8-7, 2-3) were competitive in the first half, which had five lead changes and five ties, but couldn't slow down Winston after halftime or Tillman the entire game.

“I thought we played good defense," Pitino said. “It was the rebounding."

Minnesota's Daniel Oturu had 22 points on 9-of-19 shooting, 10 rebounds, two blocks and a steal.

Michigan State had a six-rebound edge in the first half and outscored the Gophers in the second half by 12 points in part because it outrebounded them 48-30 overall.

“They bullied us on the boards," Pitino said.

Michigan State's Kyle Ahrens was held out of the game with an Achilles tendon injury.

“I guess he's day to day," Izzo said, adding the senior forward may not be able to practice regularly or play in every game.

Minnesota: Oturu needs more help. The Gophers have four players who average in double figures, but didn't have anyone get there other than Oturu until Demir made a 3-pointer with 1:31 remaining.

Carr is averaging nearly 16 points entering the game and finished with just 11 points on 3-of-11 shooting against the Spartans. The sophomore guard was limited by three fouls in the first half and was called for his fourth just 14 seconds after halftime.

Michigan State: After taking full advantage of a home-heavy schedule, the Spartans will play three of their next four games on the road.

“It's a good time to go on the road and see where we are," Izzo said. “I still think five losses will win this league."

The Spartans are the highest-ranked team with three losses, making it difficult for them to move up in the poll.

There was a moment of silence before the game for former Michigan State football coach, athletic director and trustee George Perles, who died Tuesday.

Minnesota: Hosts No. 19 Michigan on Sunday and No. 20 Penn State on Wednesday night, facing a third ranked opponent in a week.

Michigan State: At Purdue on Sunday, when the Spartans hope to win for the first time since 2014.

“I think it's one of the loudest arenas in the country," Winston said. “I think they're scoring about 20 more at the crib."