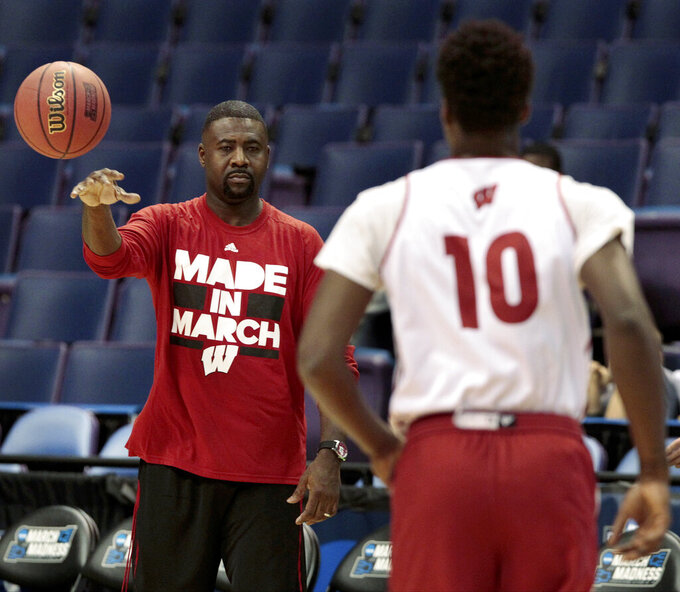 MILWAUKEE (AP) — The University of Wisconsin said Sunday the wife and daughter of men's basketball assistant coach Howard Moore were killed in a Michigan automobile accident.

Moore's wife, Jennifer, and daughter Jaidyn were killed early Saturday in the crash on the M-14 highway in Washtenaw County's Superior Township, the department said.

"There are no words to describe how devastated we are for Howard and his family," Wisconsin coach Greg Gard said. "Our basketball program is an extremely close family and we are all grieving."

Samantha Winchester of Ann Arbor was traveling west in the eastbound lanes of the Detroit-area freeway when she struck a car head-on that was carrying the Moore family, Michigan State Police Lt. Darren Green said. The 23-year-old woman and Jaidyn died at the scene, authorities said.

Moore suffered third-degree burns and his son, Jerell, had minor injuries, Green said. Wisconsin said late Sunday that Moore was in stable condition in intensive care while his son was "up and walking around."

"Howard is so much more than a colleague and coach," Gard said. "He and Jen and their children are dear friends to everyone they meet. Their positivity and energy lift up those around them. We will miss Jen and Jaidyn dearly and we will put our arms around Howard and Jerell and the entire family, giving them love and support during this unspeakable time."

Moore, a Chicago native, played at Wisconsin from 1990-95 and was head coach at Illinois-Chicago before returning to his alma mater during the 2015-16 season.

"I've known Howard ever since he was a student-athlete at Wisconsin and gotten to know his wonderful family through the years," athletic director Barry Alvarez said. "He has always been an incredible representative of our athletic department and a positive influence on everyone around him. We are truly heart-broken for his family and will be doing everything possible to help him through this tragic time. Our prayers, love and support go out to the Moore and Barnes family."

Many from the Wisconsin athletics family offered their support for Moore and his family on Saturday as word of the crash spread across social media. Washington Wizards forward Sam Dekker and Charlotte Hornets big man Frank Kaminsky, who together led the Badgers to the national championship game in 2015, both passed on their condolences.

"Thoughts and prayers are with the Moore family," tweeted Kaminsky, who was named AP college basketball player of the year in 2015, the first Wisconsin player to receive the award. "Can't even imagine the pain they are going through."

"Heartbreaking news," Martin tweeted . "Praying for Coach Howard Moore & my thoughts are with he and his family during this difficult time."