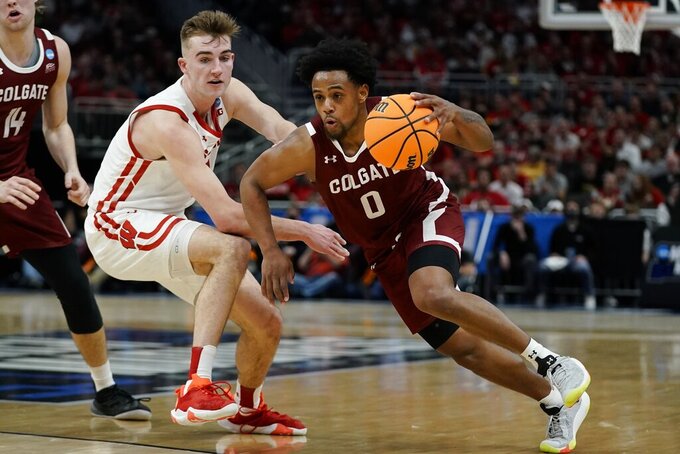 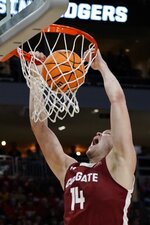 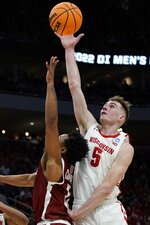 MILWAUKEE (AP) — Johnny Davis offered a simple explanation for how Wisconsin stepped up down the stretch to avoid a first-round upset.

“We just stopped being lazy on defense and non-fundamental,” the All-America guard and Big Ten player of the year said. “That’s all it was.”

Davis scored Wisconsin's last 14 points and finished with 25 as the Big Ten co-champion Badgers came from behind to beat Colgate 67-60 in the first round of the NCAA Tournament on Friday night.

Wisconsin trailed by as many as five in the second half before going on a 10-0 run and holding Colgate scoreless for more than seven minutes. Wisconsin coach Greg Gard agreed with Davis' blunt assessment of what caused the turnaround.

Davis showed he’s all the way back from the injured left ankle that knocked the Big Ten player of the year out of the Badgers’ regular-season finale. Davis returned for the Big Ten Tournament but shot 3 of 19 in a quarterfinal loss to Michigan State, which also advanced Friday night.

After shooting 3 of 11 in the first half, Davis caught fire when the Badgers needed him. Steven Crowl's 3-pointer put Wisconsin ahead for good at 53-52 with 8:08 remaining.

From that point on, Davis took over.

“That was a big shot by Steve,” Davis said. “I feel like I've done it before, but my teammates have a lot of confidence in me — so do the coaches — to close a game out.”

Davis' teammates have seen him do that all season and struggle to describe his impact.

“I'm speechless,” Wisconsin guard Chucky Hepburn said. “I've got no words to say. I just give him the ball and get out of the way.”

Nelly Cummings scored 20 points and Tucker Richardson had 15 for Colgate, which shot 10 of 22 from 3-point range to nearly topple Wisconsin.

Colgate entered the night second in the nation in 3-point percentage (.403) and 12th in 3-pointers per game (9.9). That long-range attack sizzled in the second half as the Raiders threw a scare into the partisan crowd that formed a sea of red at Fiserv Forum, which is about 80 miles east of Wisconsin's campus.

“I've been to a lot of great venues in this country: Cameron Indoor Stadium, the Palestra, Rupp Arena, Phog Allen Fieldhouse,” Colgate coach Matt Langel said. “I don't think I've ever been in an environment better than the one for a college basketball game tonight. That typically doesn't happen in NCAA Tournament games.”

The 14th-seeded Raiders (23-12) made six of their first seven 3-point shots in the second half, with Richardson going 4 for 4 from beyond the arc in the first five minutes.

Colgate led 52-48 after Jeff Woodward converted a three-point play with 10:40 left, but the Raiders wouldn’t score again until the 3:33 mark.

“Wisconsin amped up their defensive intensity a little bit more,” Langel said. “Tucker got loose a couple of times. They weren't going to let him get loose anymore. The game got a little bit more physical, as you would expect from a Big Ten champion in the guts of a close game.”

Wisconsin: Davis didn't score in the first 10 1/2 minutes but was huge when it mattered. The Badgers will need him to continue showing that second-half form if they're going to make a deep run.

Colgate: The Raiders still haven't won an NCAA Tournament game, but they're showing they can compete with anyone. They gave Tennessee all it could handle before falling 77-70 in 2019, and they blew an early 14-point lead in an 85-68 loss to Arkansas last year.

Wisconsin faces Iowa State on Sunday for a spot in the Badgers' first Sweet Sixteen since 2017.