Without Cunningham, No. 17 Oklahoma State beats No. 6 WVU 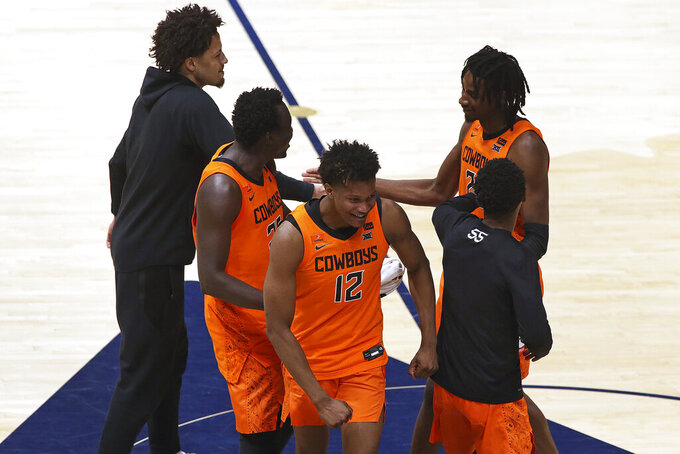 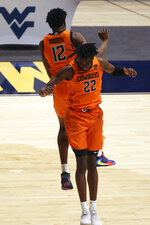 Sophomore Avery Anderson III scored a career-high 31 points and the Cowboys, with Cunningham sitting out the regular-season finale because of a sprained ankle, beat No. 6 West Virginia 85-80 on Saturday.

Oklahoma State has won six of seven heading into the Big 12 tournament.

“We’re not done yet,” Anderson said. “We’ve got a lot more in front of us that we’re trying to prove. And when we get back at full strength, it’s going to be something to watch.”

The Cowboys (18-7, 11-7) made up for the loss of Cunningham and Isaac Likekele by finding holes in the defense for easy layups, shooting 58% from the floor and outhustling West Virginia for rebounds.

Cunningham injured his left ankle late in a loss to No. 3 Baylor on Thursday. Likekele also sat out for the sixth time in seven games with a hand injury.

Stepping up were Anderson, who blew past his previous high of 17 points earlier this season, and freshman Matthew-Alexander Moncrieffe, who finished with 18 points on 7 of 10 shooting.

“It's a lot of fun when you've got a group of guys who care about each other,” Oklahoma State coach Mike Boynton said. “Man, winning is hard. But it's certainly enjoyable going on the road and banding together the way we did under some circumstances which I'm sure people were easily willing to take the other team in today's matchup.”

West Virginia had a chance to tie it near the end, but Keylan Boone stole McBride’s pass into the lane with 11 seconds left. Anderson then hit two free throws for the final margin.

The Mountaineers went 2-2 during a four-game homestand to finish the regular season. Saturday's loss denied coach Bob Huggins the chance to get his 900th win before his own fans. It also handed No. 13 Kansas the second seed in the upcoming Big 12 tournament, behind league champion Baylor.

“We had no bounce. We had zero bounce,” Huggins said. "It was that way from the beginning. What do you do? I kept saying, ‘fellas, we’ve got to play.’”

Oklahoma State trailed for most of the game until Moncrieffe scored 10 points over the first five minutes of the second half and Kalib Boone's dunk put the Cowboys ahead 54-49.

But Moncrieffe fouled out with 5:25 left, followed a few minutes later by teammate Bernard Kouma, who had 10 rebounds.

West Virginia went 13 of 14 from the free-throw line over a five-minute stretch to take a 73-72 lead with 3:43 left. The Mountaineers never led again.

Anderson scored 11 points over the final four minutes to seal the win.

“If you’re going to have success in this league with any level of consistency, you have to be able to adapt,” Boynton said. “I’m just proud of these guys to finish the season the way we did.”

Oklahoma State: Resting Cunningham for the conference and NCAA tournaments was an easy decision for the Cowboys. The Big 12's leading scorer, considered by most as the potential No. 1 overall NBA draft pick, offered his support during timeouts and exchanged greetings with players coming off the court. The Cowboys were perfectly fine without him.

West Virginia: The Mountaineers seemed to play flat-footed at times. They allowed 50 points in the paint and were outrebounded 38-29.

Both teams have first-round byes in the Big 12 tournament in Kansas City, Missouri, and will play quarterfinal games on Thursday.