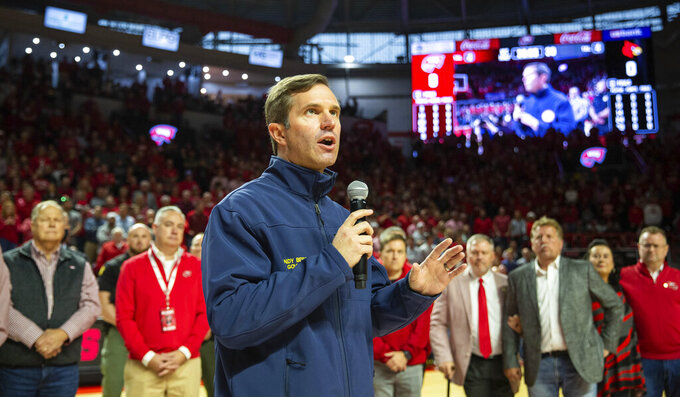 Gov. Andy Beshear addresses audience members with a message of hope for the state's tornado victims before the start of the Western Kentucky University men's basketball game against the University of Louisville at E.A. Diddle Arena in Bowling Green, Ky., Saturday, Dec. 18, 2021. (Grace Ramey/Daily News via AP)

Louisville played without 6-foot-11 Malik Williams, who averages nearly a double-double (13.9 points, 9.9 rebounds per game). Williams reportedly was out because of COVID protocols.

Without Williams and dealing with Sharp, the tallest player in college basketball, in the paint, Louisville, which averages about 26 3-point attempts a game, put up 36 on Saturday, making 13.

Western Kentucky made 9 of 11 from the arc in the first half, missed all seven of their attempts in the second but still shot 50% for the game while outrebounding the Cardinals 37-28. The Hilltoppers made 25 of 31 free throws to just 5 of 7 for Louisville.

WKU led from the outset and by nine at halftime. Louisville got as close as two with 15 minutes left in the game after a Locke 3. But Justice kicked off a 21-8 run with a three-point play and capped it with two free throws with just under five minutes left.

Louisville's final points, a jumper by Locke, cut the lead to six with 46 seconds left before five Anderson free throws ensured the win.

Justice made all five of his 3-point tries in the first half and scored 18 first-half points.

The Hilltoppers hit five straight shots for a 20-7 lead, capped by Sharp's dunk off a lob. WKU was aided by the Cardinals going 3 of 14 to start the contest.

The Cardinals cut the deficit to three with nine minutes left in the half after three straight from the arc, two by Locke, but WKU went into the break leading 46-37.

WKU has won seven of its last eight games. Its last win over Louisville came in 2008.

Louisville plays at Kentucky and WKU at Austin Peay on Wednesday.

Before the game, Kentucky Gov. Andy Beshear spoke to the fans with a message of hope for the state’s tornado victims.