Wolverines-Spartans winner gets at least share of B10 title 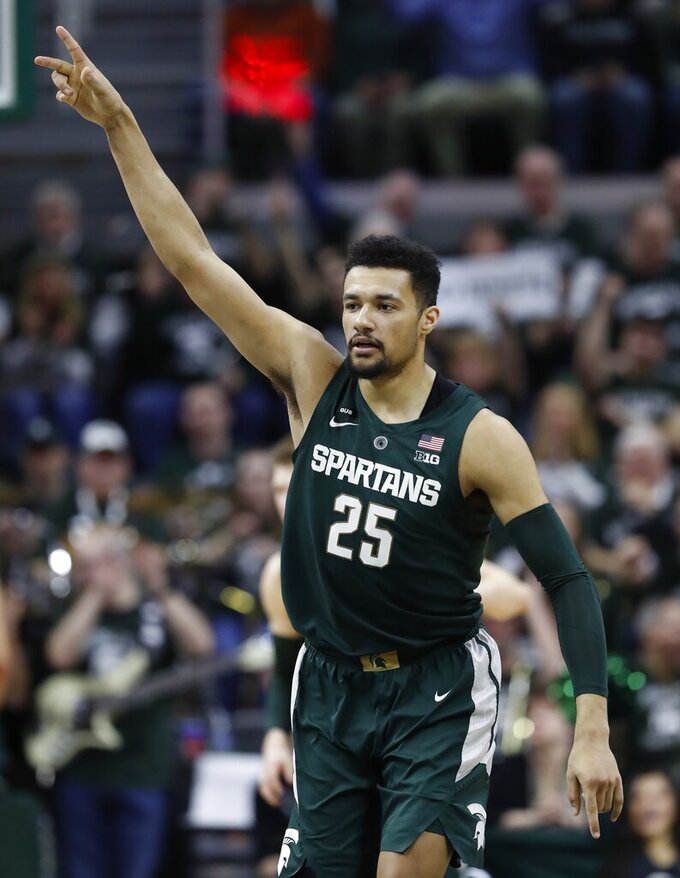 Michigan State forward Kenny Goins reacts after a basket during the first half of an NCAA college basketball game against Nebraska, Tuesday, March 5, 2019, in East Lansing, Mich. (AP Photo/Carlos Osorio) 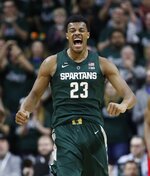 A look at the upcoming weekend around the Big Ten:

GAME OF THE WEEKEND: No. 7 Michigan (26-4, 15-4) at No. 9 Michigan State (24-6, 15-4), Saturday night. The winner clinches at least a share of the Big Ten regular-season championship and will own it outright if Purdue (22-8, 15-4) is upset by last-place Northwestern on Saturday afternoon. Defending champion Michigan State handed the Wolverines their only home loss of the season with a 77-70 win on Feb. 24. Michigan, looking for its first regular-season title since 2014, could be without Charles Matthews. He injured his ankle in the first meeting and has missed two straight games since. The Spartans have problems of their own. Nick Ward (hand) has missed four straight games and isn't expected to play. Kyle Ahrens (back) could return after missing two straight.

LOOKING AHEAD: Back-to-back home wins over Wisconsin and Michigan State put Indiana on the NCAA Tournament bubble. The Hoosiers (15-14) must win at Illinois on Thursday and at home against Rutgers on Sunday to keep their hopes alive and probably will need a couple more wins in the Big Ten Tournament to make a case to the selection committee. Minnesota (19-11) helped its NCAA chances by beating Purdue on Tuesday, and the Gophers have another resume-builder Thursday at Maryland. Ohio State (18-12), a loser in five of seven, might have played itself onto the wrong side of the bubble by losing 68-50 on the road Wednesday to a Northwestern team that had lost 10 straight. The Buckeyes finish at home against Wisconsin on Sunday.

PLAYER TO WATCH: Michigan freshman Ignas Brazdeikis goes into the showdown with Michigan State off a couple of his best games. He totaled 41 points and 14 rebounds and made 6 of 9 3-pointers in wins over Nebraska and Maryland. Brazdeikis took a bit of razzing in the Maryland game last Sunday. Fans chanted "You are ugly" when he stepped to the free-throw line in the first half. Once the win was in hand, Brazdeikis blew them a kiss.

INSIDE THE NUMBERS: Amir Coffey became the first Minnesota player since Vincent Grier in 2005 to score 30 points in back-to-back games. Coffey followed his 31-point game against Northwestern on Sunday with 32 in an upset of Purdue on Tuesday. ... Wisconsin has won 20 games for the 15th time in 17 years. That's tied with Michigan State for most 20-win seasons over that span. ... Rutgers' seven conference wins are its most in 13 years, since winning seven Big East games in 2005-06. The 2005-06 season was also the last in which the Scarlet Knights earned three conference road victories. ... Illinois made a season-high 33 free throws on 38 attempts in its 81-76 win over Northwestern last Sunday, including 23 of 25 in the second half.

ON THE WOMEN'S SIDE: The Big Ten Tournament is under way in Indianapolis. Regular-season champion Maryland opens Friday against the winner of Thursday's game between No. 8 seed Northwestern and No. 9 Michigan State. Runner-up Iowa plays the No. 7 Minnesota or No. 10 Indiana on Friday. ... Maryland and Rutgers have the longest win streaks entering the tournament, at three games. ... A media voting panel picked Iowa's Megan Gustafson the conference player of the year for the second year in a row. She leads the nation in scoring (27.7 ppg) and field-goal shooting (70.8 percent) and is second in rebounding (13.3 rpg). ... Freshman Taylor Mikesell played a key role in Maryland winning the outright conference title. She scored 20 points, made four 3-pointers and had four assists and three rebounds in the clinching 71-62 win over Illinois last Saturday.