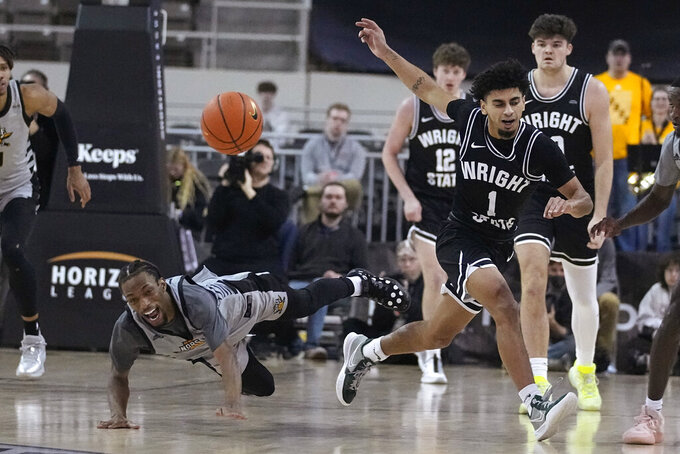 Northern Kentucky's Bryson Langdon, left, and Wright State's Trey Calvin (1) collide as they go for a loose ball during the second half of an NCAA college basketball game for the Horizon League men's tournament championship Tuesday, March 8, 2022, in Indianapolis. (AP Photo/Darron Cummings) 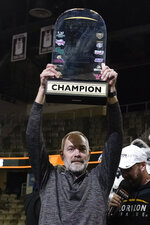 INDIANAPOLIS (AP) — Trey Calvin made a jumper from just inside the free-throw line with 10.5 seconds left to complete a late comeback from 16 points down to earn Wright State a 72-71 win over Northern Kentucky on Tuesday night to claim both the Horizon League championship and an automatic berth in the NCAA Tournament.

Marques Warrick got himself open off a screen and drilled a 3-pointer with 22 seconds left to put Northern Kentucky in front 71-70, and the Norse had time to take the last shot of the game, but Bryson Langdon, momentarily open at the 3-point line, had a defender arrive at the same time as the ball and his desperation shot with a hand in his face was off.

The Raiders closed the first half with a a 6-2 run to take a 39-32 lead at the half and Warrick took over in the second half, hitting a jumper and a 3-pointer to quickly push the Northern Kentucky lead to 44-34. He added a three-point play and three straight jumpers to push the lead to 16 points, 57-41, with 11:47 left.

Calvin took the defensive assignment of guarding Warrick and Tanner Holden took over the Raiders offense, scoring seven points in a 14-0 run that cut the Wright State deficit to 67-66 with 8:37 to play. Tim Finke hit a mid-range jumper with 6:24 left to tie the game at 61 and Holden drove for a reverse layup to put Wright State in front.

Calvin hit 3 of 5 from behind the arc and finished with 21 points to lead Wright State (21-13). Holden hit 9 of 11 free throws to finish with 19 points and three steals, Grant Basile added 18 points and Finke contributed 10.

Warrick hit 12 of 17 shots from the field and finished with 28 points to lead Northern Kentucky (2012). Trevin Faulkner had 14 points, Langdon 12 and Adrian Nelson chipped in 10 points off the bench.