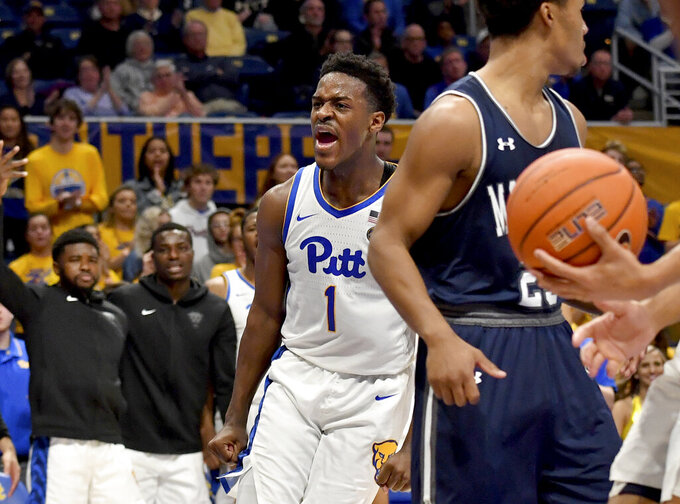 Pitt guard Xavier Johnson drives celebrates after drawing a foul against Monmouth in the second half of an NCAA college basketball game Monday, Nov. 18, 2019, in Pittsburgh, Pa. (Matt Freed/Pittsburgh Post-Gazette via AP) 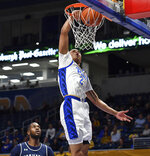 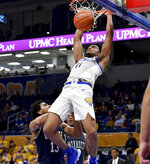 PITTSBURGH (AP) — After a promising first season under head coach Jeff Capel in 2018-19, Pitt’s offense has started his second in a prolonged slump.

Despite returning three of their top four scorers, the Panthers entered play on Monday shooting 38.7% from the floor, down almost three percent from a year ago.

In the second half, the offense of a year ago returned. Sophomore point guard Xavier Johnson broke out of a personal slump, scoring 13 of his 15 points in the second half to lead the Panthers to a 63-50 victory.

After Pitt (3-2) slogged through the first 20 minutes, they led the visiting Hawks by just a single point, and that was only possible thanks to a 10-for-10 mark at the charity stripe.

Capel even benched Johnson at one point for walk-on Onyebuchi Ezeakudo.

Eventually, the Panthers found their game, thanks to Johnson not only scoring, but also distributing. He had nine of Pitt’s 13 assists and seven of them came in the second half.

“Offensively, we’ve struggled to find a rhythm,” Capel said. “It was good to see him do some things and get back to who he is.”

For Johnson, the struggle has been about managing expectations after he surprised as a freshman in 2018-19.

“I put too much pressure on myself,” he said. “I’m in a deep struggle right now, still, but I’m trying to break out of it.’

Monmouth (1-4) found outside success from guard Ray Salnave, who had 10 points and was 2 for 5 from 3-point range, and inside with forward Mustapha Traore, who was 5 of 10 from the floor for 12 points.

For Monmouth, the light is at the end of the tunnel. The Hawks began the 2019-20 season by playing five consecutive true road games. They’ll now play a pair of neutral-site matchups before finally starting the home portion of their schedule on Nov. 26.

After starting the season with a win over Lehigh, the scheduled has toughened, as well. The loss to Pitt was the Hawks’ fourth straight, three of which came on the home floors of high-major opponents. But that’s part of the plan for head coach King Rice.

“When I took over Monmouth nine years ago, I said I will play at any building,” Rice said. “My school does not make me do that. When you recruit, you recruit kids that think they should be on high major clubs, so I tell them in recruiting that we’re going to play two or three of them.”

Under Capel, Pitt has often relied on an ability to get to the free-throw line. Pitt attempted 26 free throws to Monmouth’s eight. But that ability has only showed itself in fits and spurts as the Panthers stumbled to a 2-2 record in their first four games of the season.

“We’re constantly trying to drive and get paint touches,” Capel said. “When you have good spacing, good movement and some guys that are pretty good off the bounce, you’re able to get that at times.”

Monmouth: Is scheduled to participate in the MAAC-ASun Challenge for two games in Orlando, Florida, starting with Kennesaw State on Friday.

Pitt: Will continue the Rocket Mortgage Fort Myers Tip-Off with another home game against Arkansas-Pine Bluff on Thursday.