Young Gophers will bring Battle back to punishing Big Ten 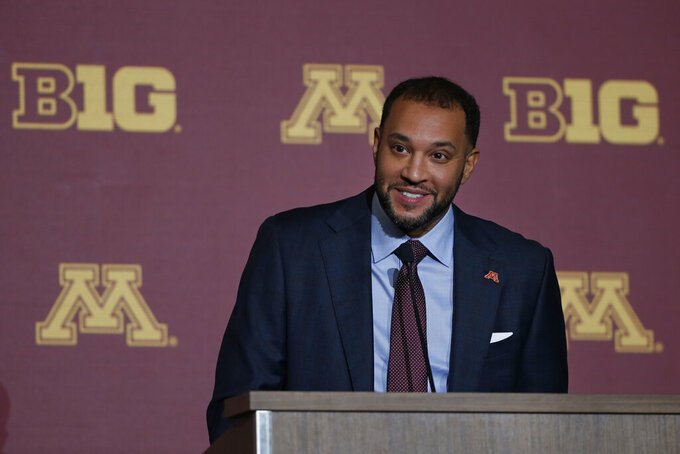 MINNEAPOLIS (AP) — The Big Ten can be a brutal place for inexperienced and undersized teams. There was no waiver for Minnesota in coach Ben Johnson's first year on the job.

Elevating the Gophers to an upper-echelon program in one of the country's most punishing conferences remains an ongoing challenge for Johnson and his staff, coming off a 13-17 finish in 2021-22 with five of their top six scorers from last season gone.

Jamison Battle is a good place to start.

The third-year forward was picked for the 11-player preseason All-Big Ten team, the third-leading scorer among returners in the conference behind Hunter Dickinson (Michigan) and Trayce Jackson-Davis (Indiana). After transferring home from George Washington, the 6-foot-7 Battle averaged 17.5 points, 6.3 rebounds and 36.6 minutes per game to lead the team in all three categories.

“His experience, because he’s been through it, is teaching all of our guys every single day in practice. I tell the freshmen that he’s beating up on, ‘You guys need to be the luckiest guys in the world, because you’re learning from a guy I think has a chance to play at the next level,'" Johnson said. “He did an unbelievable job for setting the tone for our program.”

Battle, one of nine Minnesota natives of the 15-man roster, dropped 17 pounds during spring and summer conditioning with some dietary adjustments.

“This is the best I’ve felt defensively in my whole career,” Battle said. “I feel like I’m jumping at a high level. It’s just those little things that help you change your game."

The Gophers started 10-1 last season, including a win at Michigan and a competitive loss to Michigan State, but reality set in after that on the way to a 4-16 finish in Big Ten play.

Two returners they were counting on, forwards Parker Fox and Isaiah Ihnen, both suffered offseason ACL tears for the second straight year and have been relegated to team spirit roles once again. The 6-foot-9 Ihnen was on track to start at the shooting guard spot.

Johnson, who grew up in Minneapolis, played for the Gophers and has been one of the state's championship-deprived fans his whole life. He tried his best to quash the “here we go again” mindset before it took root. That attitude never crept in with the players last season, Johnson said, despite three Big Ten losing streaks of four games or more.

Better news has come to the Gophers lately. Dawson Garcia, who starred at Prior Lake High School in the Twin Cities, went to Marquette and then to North Carolina, transferred home to be closer to family and was granted immediate eligibility by the NCAA.

The 6-foot-11 Garcia will give the Gophers a post presence that was lacking last season.

“Dawson is a man on a mission right now,” Johnson said, predicting a double-double average for Garcia, who has three years of eligibility remaining. “He brings the juice and that warrior’s mentality in everything he does.”

The Gophers start their season at home on Nov. 7 against Western Michigan.

Johnson and his staff didn't need to find quite as many transfers as they did last year, but Garcia had company in the portal exit to Minnesota.

The new starting point guard is Ta'Lon Cooper from Morehead State, where he averaged 33.9 minutes, 9.1 points and 5.9 assists last season as a first team All-Ohio Valley Conference selection. He's in his fourth year with 95 career college games played, the most experience on the roster. Taurus Samuels (Dartmouth) is in line to back up Cooper.

Carrington is a strong candidate to start at shooting guard. The 6-foot-9, 230-pound Payne might be the most Big Ten-ready player of the group who whose role in the frontcourt grew when Fox and Ihnen were injured. Johnson said Payne has senior-like strength.

“He just has God-given gifts. He was blessed. His athleticism and explosion and torque and power, you don’t see that very often,” Johnson said.

The Gophers play eight of their 11 nonconference games at home, with a trip to play defending ACC Tournament champion Virginia Tech for the ACC/Big Ten Challenge on Nov. 28 the only true road game. DePaul (Nov. 14) and Mississippi State (Dec. 11) are the only high-major nonconference opponents set to visit Williams Arena.

The Big Ten schedule starts at Purdue on Dec. 4. The conference home opener is against Michigan on Dec. 8. Then comes a daunting seven-game slate from Jan. 3-25: at Wisconsin, Nebraska, at Ohio State, Illinois, Purdue, at Michigan and Indiana.