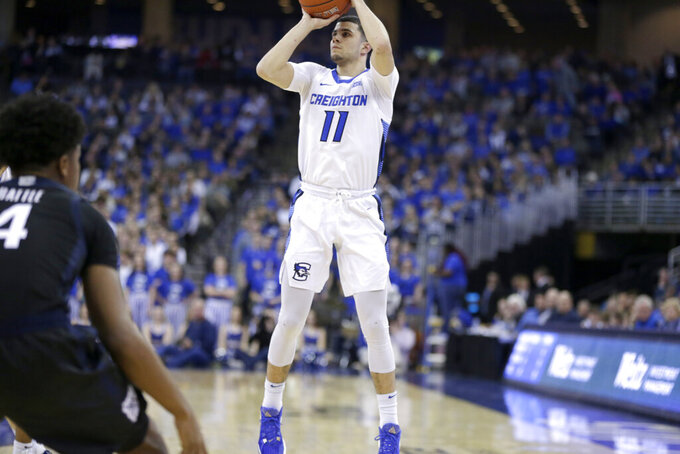 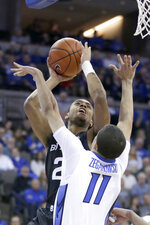 Zegarowski made all seven of his 3-pointers and finished with 25 points, and No. 15 Creighton beat the 21st-ranked Bulldogs 81-59 on Sunday for its fourth straight win over an AP Top 25 opponent.

The Bluejays (22-6, 11-4 Big East) have won nine of 10 and remain one game behind conference-leading Seton Hall.

Butler (19-9, 7-8), which dropped its third straight game, played the second half without scoring leader Kamar Baldwin. He limped off the court late in the first half with an injury to his left ankle.

Zegarowski benefited from Butler shading off him. When Zegarowski would come off a ball screen, he could look to pass to big man Christian Bishop inside or to sharpshooters Mitch Ballock or Ty-Shon Alexander in the corner, or make a play on his own. With the Bulldogs dropping a man down on Bishop and defenders staying on Ballock and Alexander, Zegarowski had room to get shots off from the wing. When he did pass, he often got the ball right back.

“He had a night where everything was going in,” Creighton coach Greg McDermott said. “He made the right reads, and when you have guys like Mitch Ballock who has six assists and Ty-Shon who has four assists and Christian with five, it shows guys are willing to move the ball. When a guy gets hot, we've got to get him the basketball.”

Zegarowski set his career high with seven of Creighton's season-high 15 3s on 26 attempts. He's one of three Bluejays shooting 40% or better from beyond the arc.

“I just try to go out and make the right play,” he said. “Tonight it was awesome to play with a lot of great players who spread the floor and a staff that puts me in position to be successful. I took what the defense gave me.”

Creighton was just 4 of 22 on 3s in a 71-57 loss at Butler on Jan. 4. The Bluejays had 10 3s in the first half alone Sunday, with Zegarowski making five as the Bluejays began to pull away.

“We didn't execute great with our game plan defensively," Butler's Sean McDermott said. "We know they like to shoot the 3, and we let them shoot it, and they hit a ton of them.”

The Bluejays led 40-21 at halftime after outscoring the Bulldogs 17-2 and holding them without a field goal over the last 6:15.

The onslaught continued in the second half, with the crowd coming to its feet when Ballock passed to Bishop for a thunderous fast-break dunk and again when Zegarowski and Alexander made back-to-back 3s to make it 57-30.

Zegarowski went to the bench for good with just under 12 minutes left and Creighton substituted freely the final six minutes.

Butler: The Bulldogs came in with the Big East's top defense, allowing 62 points per game. They had given up that many with 11 1/2 minutes left in the game, and Creighton's 81 were the most Butler has allowed in regulation (Marquette had 89 in an overtime game). The Bulldogs' offense couldn't get any rhythm established without Baldwin and shot a season-worst 38%.

Creighton: The Bluejays are one of the hottest teams in the country. They've won five straight conference games for only the second time since joining the Big East in 2013. Their five wins over Top 25 opponents is a season record.

Creighton's Bishop had a career-high 19 points to go with his seven rebounds and five assists in his best all-around game of the season. The 6-foot-7 Bishop is listed as a forward but has had to play center because the undersized Bluejays' young center, the 6-11 Jacob Epperson, is injured and out for the season.

“Probably the most improved part of our play since the start of conference play is Christian's impact on our offense,” Greg McDermott said. “He was a guy early in the season who would have twice as many turnovers as assists. Now he's totally flipped that.”

A last-second loss to Seton Hall coupled with the blowout loss at Creighton probably will knock Butler out of the Top 25. Creighton beat back-to-back ranked teams in Marquette and Butler and should move up.

Butler hosts DePaul on Saturday and will try to avenge a 79-66 loss to the Blue Demons on Jan. 18.

Creighton goes for the two-game season sweep at St. John's next Sunday.