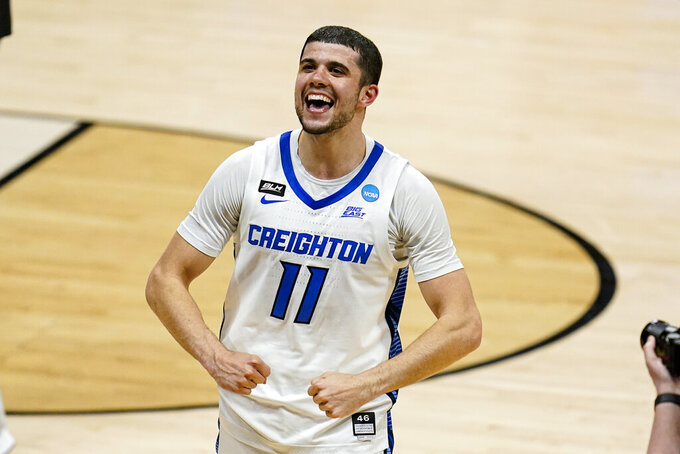 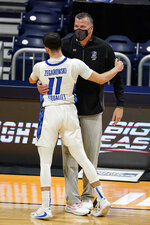 INDIANAPOLIS (AP) — Marcus Zegarowski and his Creighton teammates battled through a close call — along with a few jitters — to open the NCAA Tournament.

Maybe those initial struggles helped prepare them for a performance — steady, confident and playing free, as Zegarowski described it — that gave the Bluejays a breakthrough tournament win.

Zegarowski scored 20 points to help Creighton beat Ohio 72-58 on Monday, securing the program's first trip to the round of 16 in 47 years.

When it was over, the Bluejays celebrated on the Hinkle Fieldhouse court with high-fives and hugs, then started motioning to their blue-clad fans to get louder and join the victory party. It included Zegarowski standing on a courtside table, and coach Greg McDermott giving a thumbs-up to fans at the other end as he walked off the court.

“It's a phenomenal feeling,” Zegarowski said. "This is a two-year kind of thing for us. We had it taken away from us last year. Everything we’ve been through this year is for moments like this, and I’m happy we capitalized and came through.

“But you know, we're not done yet. This just the start.”

The trials endured by Creighton this year included a near-crisis instigated by McDermott, who made a racially insensitive remark in the locker room to his players after a late-February loss. He was suspended for one game, apologized multiple times and was reinstated.

Creighton got blown out by Georgetown in the Big East Tournament final and survived a one-point win against UC Santa Barbara in the NCAA opener.

“The first game of this tournament, I think we were kind of almost on our heels a little bit — almost maybe a step too slow,” Zegarowski said. “We were kind of just in our own heads, including myself. ... I just think we play better when we play free and we just play loose, and just trying to enjoy each other.”

The last time Creighton made it to the regional semifinals, it was 1974 and the tournament field had 25 teams. Now the Bluejays are advancing to the second weekend, where No. 1 overall seed Gonzaga awaits.

Damien Jefferson added 15 points for the Bluejays (22-8), the fifth seed in the West Region. They had a cold opening few minutes before the offense — and Zegarowski in particular — got rolling with a strong performance that built a double-digit lead by halftime against an upstart trying to spring a second straight tournament upset.

That lead grew to 21 points in the opening minutes of the second half, and the Bluejays never let the 13th-seeded Bobcats (17-8) get closer than nine from there.

“Their focus was good in the film room yesterday and this morning before we went over at shootaround,” McDermott said. “And they were hungry to play.”

Dwight Wilson III scored 12 points to lead Ohio, the Mid-American Conference champion that opened the tournament by bouncing 2019 champion Virginia on Saturday night. But Ohio struggled to knock down shots, finishing at 32% from the field and 7 for 30 from 3-point range.

“You hate to see something like this end the way it ended,” Ohio coach Jeff Boals said. “But it does not take away from anything they’ve done. ... It hurts right now, but it’s going to be a great memory someday.”

Ohio: This was the Bobcats' first NCAA Tournament trip since 2012's surprise run to the Sweet 16. Boals directed a 62-58 win against the Cavaliers for the program's third straight first-round win in the tournament dating to 2010, but the Bobcats couldn't recapture the magic.

Creighton: The Bluejays had never won back-to-back games in the same NCAA Tournament. A first-round win over Texas was all it took to reach the regional semifinals in 1974.

Ohio point guard Jason Preston — whose improbable ascent from overlooked prospect was an inspirational story coming out of the Virginia upset — struggled to four points on 1-for-10 shooting, though he had nine rebounds and seven assists.

“I missed a lot of makeable shots, a lot of floaters I should've finished,” Preston said, adding: “This is on me.”

Zegarowski finished 7 for 16 from the field with four 3-pointers. He also came up with some key late plays to keep Creighton in control after Ohio clawed back within 65-56. His floater at the 2:04 mark followed by two free throws at 1:03 pushed the margin back up to 13.

The seedings wouldn't make it the biggest upset of the tournament, but Creighton faces a momentous challenge in Gonzaga, which is trying to become the first unbeaten national champion since Indiana in 1976.