6 officials out of NCAA Tournament after 1 tests positive 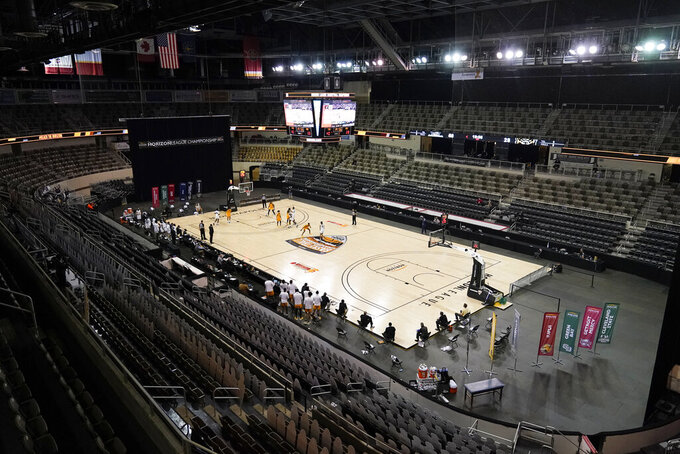 Oakland and Cleveland State play at Farmers Coliseum during the second half of an NCAA college basketball game in the men's Horizon League conference tournament championship game, Tuesday, March 9, 2021, in Indianapolis. The coliseum is one of six venues hosting NCAA Tournament games later this week.(AP Photo/Darron Cummings)

INDIANAPOLIS (AP) — Parts of the NCAA's finely honed plan for playing March Madness amid the pandemic came into question Tuesday just as teams began gearing up for practices to tune up for the games later this week.

One referee tested positive for COVID-19, forcing him and five others who went out to dinner with him, out of the tournament.

Their excursion ran counter to a protocol that called on all players and staff to eat at their NCAA hotels, but because the refs' rooms weren't ready and there was no food available, they were given a pass.

It resulted in a big shake-up of the officiating corps for the games, 52 of which take place Thursday through next Monday at different arenas in Indianapolis, Bloomington and Purdue. Though the NCAA brought plenty of backup referees, the mass departure served up yet another illustration of how things can go wrong.

“It's not ever going to be perfect in a pandemic,” NCAA vice president Dan Gavitt said. “It’s an unfortunate and disappointing circumstance for all involved. But I don't think there’s something that can be pinpointed as a kind of failure here. Just an unfortunate set of circumstances.”

Earlier, questions arose after coach Rick Pitino ran a late-night practice with his Iona team as part of the NCAA's late and unannounced change in testing protocol, first reported by The New York Times.

Gavitt portrayed that as a “practical adjustment," and not a major change.

He said players were initially going to be required to pass two COVID-19 tests no less than 12 hours apart on different calendar days to be eligible to practice after they arrived. Iona took its two tests in the same day, and Gavitt said the change had been OK'd by the NCAA medical advisory group and the local health department.

Pitino said he was given the green light for the Sunday night workout, and so, he went. Iona missed 60 days in the middle of the season because of the virus.

“I gave four guys the night off," Pitino said. "We practiced a lot of the other guys who didn’t get a lot of minutes” in Iona’s league championship game win Saturday.

On another front, Georgia Tech coach Josh Pastner announced a member of his school's traveling party tested positive. He did not disclose whether it was a player, but noted the person will not be back unless the Yellow Jackets advance to the Sweet 16.

Gavitt said there were five positive tests out of 2,300 that had been analyzed so far in Indianapolis, but that those five did not necessarily involve team personnel, and could also have included staff with access to arenas.

Overall, Gavitt painted an optimistic picture, saying better weather in Indianapolis on Tuesday (fog, rain and hail greeted many of the arriving teams Monday) made it possible for teams to “extend” their quarantine beyond the hotels into some approved outdoor areas.

The NCAA set a Tuesday evening deadline before it freezes the bracket. After that, any team that pulls out cannot be replaced and its opponent would move to the next round. Gavitt said he was not aware of any teams that will have to withdraw from the tournament.

Despite its positive test, Georgia Tech remained in the field, as did Kansas and Virginia — two teams that pulled out of conference tournaments last week and were waiting out quarantines with the hope of being ready for their games Saturday. The NCAA said Virginia was the only one of the 68 teams that had not arrived in Indianapolis as of Tuesday afternoon; the Cavaliers expect to travel Friday for Saturday's game against Ohio.

“Teams have been very cooperative,” Gavitt said. “Things are going quite well, but no one’s letting their guard down. No one’s making any assumptions about the lack of challenges going forward. So far, so good.”