7-footer dominant in No. 9 Creighton's rout of Kennesaw St 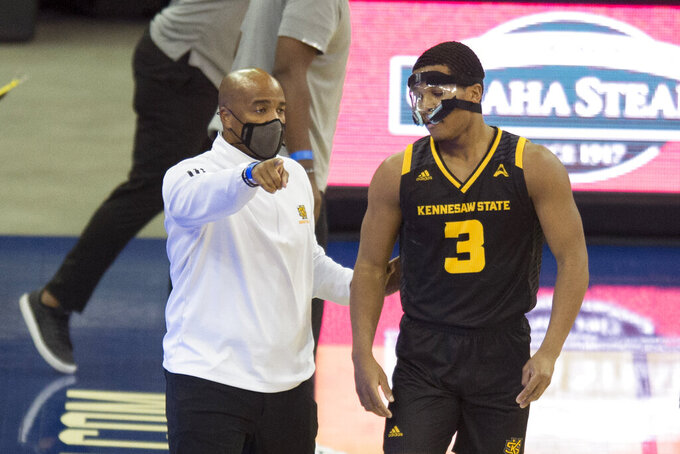 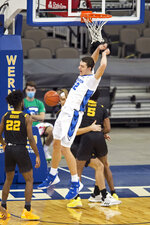 OMAHA, Neb. (AP) — Ryan Kalkbrenner moved to Omaha in June so he could get a head start developing his game and body.

The hard work already is paying off for Creighton's 7-foot freshman center.

Kalkbrenner turned in another strong performance off the bench Friday, scoring 14 points to help lead the ninth-ranked Bluejays past Kennesaw State 93-58.

“When we recruited him, our expectation was for him to come in and have an impact if he did what he was supposed to do,” coach Greg McDermott said. “He's an absolutely joy to coach. He listens, he soaks up everything, he asks intelligent questions and he understands the game.”

Kalkbrenner went 7 for 8 from the floor and dunked on four of five possessions while the Bluejays (3-0) were on an early 23-4 run. He also had six rebounds, blocked two shots and had a steal — all in 15 minutes.

The Bluejays signed Kalkbrenner out of St. Louis after he turned down scholarship offers from Kansas, Purdue and Stanford.

He showed up in Omaha in June, taking advantage of an NCAA COVID-19 pandemic rule that allowed him to live for several weeks with assistant coach Paul Lusk and do workouts in strength and conditioning coach Jeremy Anderson's garage.

“He looks skinny, but he's 240-some pounds,” McDermott said. “He's going to get better and better because he works at it, studies the game and wants to be good.”

Kalkbrenner said it's been a big adjustment learning all there is to know about the Bluejays' up-tempo offense. As backup to Christian Bishop, he had eight points in 11 minutes against North Dakota in the opener Sunday and 10 points and four rebounds in 15 minutes against Omaha on Tuesday.

Kennesaw State (2-2) put up only mild resistance after the first five minutes.

Late in the first half, Ballock converted a pass from Denzel Mahoney into a layup. Mahoney then made a steal and Jacob Epperson whipped the ball to the left wing, where Ballock swished a 3-pointer from more than 30 feet for a 50-22 lead.

Kennesaw State: The Owls were playing their first Top 10 opponent since 2011 and the outcome was predictable for a team that went 1-28 last season.

Creighton: If McDermott wanted to get a good amount of playing time for a lot of guys, he accomplished that. The Bluejays have played two games against opponents from the Summit League and one from the Atlantic Sun. The schedule gets significantly tougher now.

Creighton posted its most lopsided victory against a Division I opponent since beating South Carolina Upstate 116-62 on Dec. 20, 2017. ... McDermott went nine deep into his bench in the first half and 13 of his players got minutes in a game in which the Bluejays led by as many as 43 points.

Creighton visits No. 7 Kansas on Tuesday.