8 of 10 conference games played in pandemic; it wasn't easy 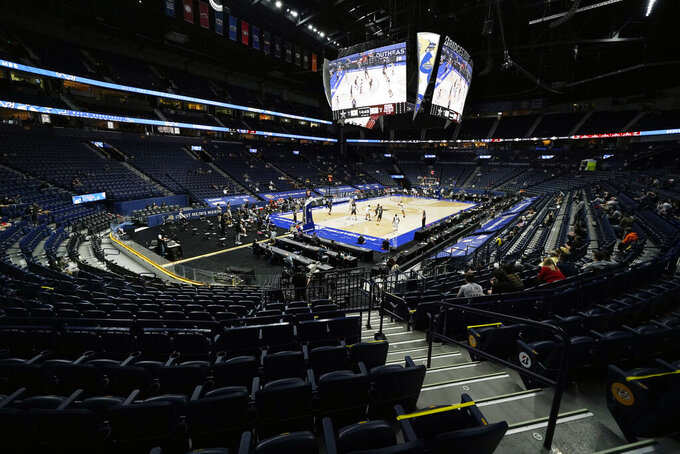 FILE - In this Wednesday, March 10, 2021 file photo, Fans sit in seats assigned for social distancing at an NCAA college basketball game in the Southeastern Conference tournament in Nashville, Tenn. For all the stops and starts endured by men's and women's college basketball teams because of the pandemic, more than 80% of scheduled conference games were played this season, according to research by The Associated Press. The season was nonetheless a grind for most teams and none had it harder than the George Washington men and UC Davis women. By Eric Olson. (AP Photo/Mark Humphrey, File)

Like many teams in college basketball, George Washington University had to endure quarantines, testing protocols and a long pause because of a COVID-19 outbreak.

What other teams didn't have to deal with were worries about personal safety and a weeklong move off campus because of the insurrection at the U.S. Capitol and the threat of more riots in Washington, D.C.

On the West Coast, the UC Davis women never had a single positive COVID-19 test but still were shut down 59 days because of other teams' virus issues and a regional stay-at-home order. The Aggies ended up in the NCAA Tournament, something coach Jennifer Gross never would have imagined in January.

The George Washington men didn't have such a happy ending. Three players opted out in December and another left after a teammate with the virus required hospitalization. The Colonials played only 17 games and lost 12.

“We all love to win and compete,” GW coach Jamion Christian said, “but I’m never putting winning and competing over someone’s life. I did feel like this year was a tough battle for me personally because I felt like we were toeing that line.”

Christian paused when asked, if it were up to him, whether there should have been a college basketball season.

“I don’t think the Ivy League was wrong in their decision,” he said. “That’s what I would say.”

Of 32 Division I conferences, only the Ivy League didn’t play. Everyone else soldiered on through the pandemic.

The list of teams shut down at least once because of COVID-19 is extensive. Iona was down 51 days, the longest pause among men's teams, and never seemed to shake the bug in Rick Pitino's first year at the school.

Duke, one of the biggest brands in the game, called it quits during the ACC Tournament because of a positive test and its women's team pulled the plug three months ago. A positive test knocked VCU out of the NCAA Tournament the day before its opener against Oregon.

For all the stops and starts, 82% of scheduled Division I men's and women's conference games were played, according to an NCAA survey provided to commissioners and obtained by The Associated Press.

On the other end, the Colonial Athletic Association got in only 51 of 90 men’s games and the Southern Conference played 53 of 90 women’s games.

Many leagues altered their scheduling to reduce travel and mitigate infection risk, with 18 of the 31 going to back-to-back games between the same teams at the same site on consecutive nights. Some leagues started their conference schedules earlier and built in dates for makeup games.

George Washington had eight games canceled during a 35-day pause in January and February. A game scheduled for Jan. 6, the day of the Capitol insurrection, was called off because the opponent, Massachusetts, left town amid safety concerns.

A home game was moved to George Mason in Fairfax, Virginia. That happened during the Colonials' weeklong move into a hotel because GW is about a mile from the Capitol, and the campus was inside a security perimeter set up before the inauguration of President Joe Biden.

Precautions against the virus had already forced GW players to stay in their dormitory rooms — no one lives off campus — except for when they were at practice or games. Add in worries about personal safety, and the team psyche was affected.

“I don’t want to be dramatic, but when people feel like they’re in a survival state, they operate differently,” Christian said. “Typically we’re in thrive state where maximum effort gives you maximum performance. When you’re in survival (mode), you’re obviously worried about getting to the next day, and some people responded better with that and some didn’t respond as well.”

Out West, the UC Davis women opened their season Nov. 25 and didn't play again until Jan. 22. The Aggies had a total of 14 games canceled, and two others weren't played because Cal State Northridge opted out of the season.

The team went more than a month without basketball activity during a regional stay-at-home order. Yolo County, where Davis is located, wouldn't make an exception for sports teams, so the players were limited to outdoor strength and conditioning sessions.

Gross said she told her players she would be supportive if they wanted to opt out the rest of the season. All the players elected to press on.

The county relented after Christmas, allowing the team back into the gym as long as players and staff did daily antigen testing and were fully masked for practices.

Gross said she wasn't sure what would happen when the stay-at-home order was lifted and UC San Diego visited for that Jan. 22 game. The Aggies' 80-62 victory started a regular season-ending stretch in which they won nine of 11 games. They swept three games in the Big West Tournament to secure their third NCAA appearance since 2011.

“Seeing them on the ladder cutting down the nets that's what made me smile," Gross said. "They got there together, they relied on each other, and that's what we had to do.”

The Aggies lost 70-51 to Missouri State in the NCAA Tournament, ending a season in which Gross said she often felt as if she was constantly delivering bad news. Looking back, she said, basketball — and the hope of playing it — was just what her players needed during an otherwise stressful time for everybody.

“I would never want to take that away from them,” Gross said. “We turned something that was really challenging into a positive for our student-athletes. Our team will tell you that we grew closer together and we experienced a lot of joy this year and had a lot of fun. I don’t think I would change it.”