ACC preview: UNC, Duke stand out even with coaching turnover 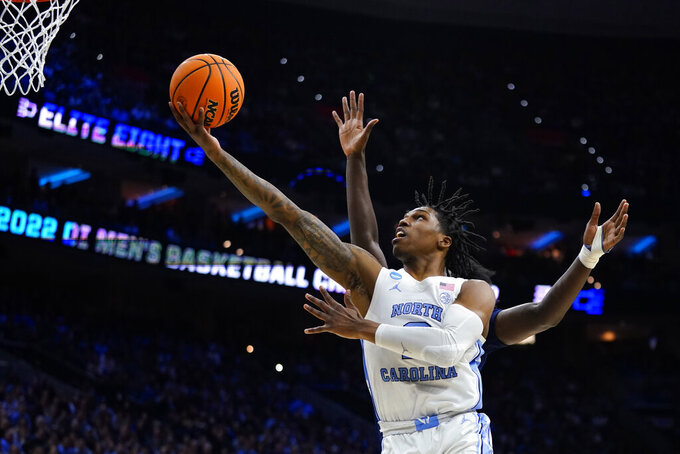 FILE - North Carolina's Caleb Love goes up for a shot past St. Peter's Clarence Rupert during the first half of a game in the NCAA men's college basketball tournament March 27, 2022, in Philadelphia. “We kind of want to write our own story,” Love said. “This is a new team. This is a new age. For us to go out this year and do what we've got to do, knowing what happened last year, we're more motivated than ever.” (AP Photo/Chris Szagola, File)

Notre Dame coach Mike Brey was out recruiting during the Peach Jam summer tournament when someone cornered him with a question.

“They said, ‘Hey Coach, do you think the two new guys at Duke and Carolina are going to do well?’” Brey recalled. “I said, ‘I hope not.’ But I think they're pretty good."

Rivals North Carolina and Duke have long grabbed the spotlight in the Atlantic Coast Conference, and that continues in a time of drastic change for both programs. First it was the retirement of one Hall of Fame coach in UNC's Roy Williams in April 2021, followed by the other in Duke's Mike Krzyzewski after last season.

Yet Williams replacement Hubert Davis guided the Tar Heels to the NCAA championship game in his first season — including a win against the rival Blue Devils in the Final Four in an epic first-ever tournament meeting — and opens his second with the nation's No. 1-ranked team. Krzyzewski successor Jon Scheyer kept the recruiting successes rolling and begins his tenure with a team ranked No. 7 in the preseason AP Top 25.

And once again, the Tar Heels and Blue Devils are picked 1-2 as preseason favorites in the league, even with those new head coaches roaming the sideline.

“I think Hubert proved himself last year, and I thought it was the ultimate proving of himself in that it wasn't going great for a while,” Brey said. "And he put it together and worked it out. I've got a lot of respect for Jon. He is a gifted young coach. ... I think Mike really relied on him to do a lot.”

Krzyzewski and Williams combined to win 2,105 games and eight NCAA championships, though the league still has two coaches who have won NCAA championships in Syracuse's Jim Boeheim (2003) and Virginia's Tony Bennett (2019). There are two other coaches with at least two decades at their current schools in Florida State's Leonard Hamilton (entering Year 20) and Brey, now in his 23rd season.

It's also a league carrying a bit of an “I told you so" vibe. There was plenty of criticism about the league's strength during last season and the ACC only got five NCAA Tournament bids, yet the league turned in a strong postseason performance that included UNC reaching the title game, Duke in the Final Four and Miami reaching its first regional final.

“You don't do that when your league is down,” Hurricanes coach Jim Larranaga said.

Maybe not, but the league is starting the year with only three ranked teams (No. 18 Virginia is the other). It'll be up to the rest of the league to boost those NCAA tourney bids.

After the top trio, Miami is picked to finish fourth in the 15-team league, followed by Florida State.

Notre Dame also has a freshman to watch in 6-4 guard JJ Starling, a five-star prospect ranked No. 21 by 247sports.

Miami landed one of the nation's top transfers in guard Nijel Pack, who averaged 17.4 points at Kansas State as an all-conference performer in the Big 12.

UNC also went to the portal in hopes of replacing production lost with Brady Manek's departure. The Tar Heels added Northwestern's Pete Nance, giving them another big man with the capability of stepping outside.

Louisville's Kenny Payne joins Scheyer as the league's two new coaches this year. Like Scheyer, he's leading the program where he was part of a national-title winner as a player (1986). Payne replaces Mike Pegues, who worked as the interim coach when Chris Mack departed in January after three-plus seasons.