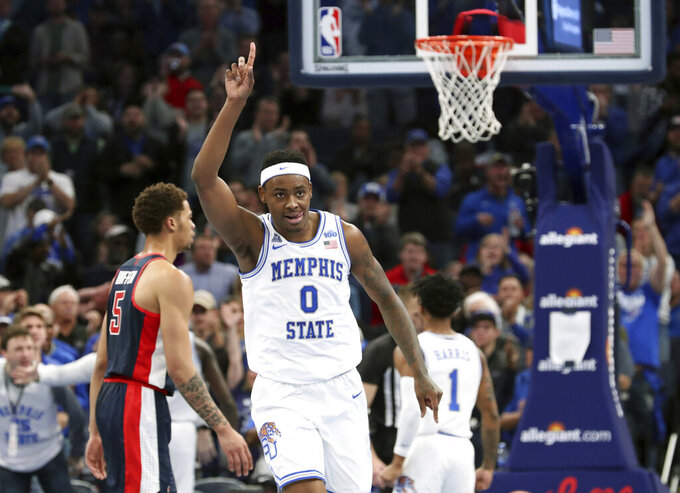 Memphis' D. J. Jeffries (0) reacts after dunking a basket in the first half of an NCAA college basketball game against Mississippi, Saturday, Nov. 23, 2019, in Memphis, Tenn. (AP Photo/Karen Pulfer Focht)

MEMPHIS, Tenn. (AP) — The 16th-ranked Memphis Tigers already knew they would have to play a long stretch without James Wiseman, their top freshman.

Then another freshman, Lester Quinones, went to the locker room with an undisclosed injury after playing less than nine minutes against Mississippi.

Good thing coach Penny Hardaway has other a handful of very talented freshmen.

Precious Achiuwa scored 25 points and grabbed 11 rebounds, while D.J. Jeffries added 23, including a dunk with a second left as Memphis held off the Rebels, 87-86, on Saturday for its third consecutive victory without Wiseman.

“To have a 16-point lead on a really well-coached team that has veteran guards and veteran players, I mean that’s amazing for us,” Hardaway said of this win. “We will grow from this. We cannot go backward from this point forward with our energy and our understanding of what we’re trying to do. But it’s huge for us not to have Lester and James in there and be able to do that.”

Blake Hinson beat the buzzer with a 3 for the final margin after Ole Miss (4-1) had trailed by as much as 16 in the second half.

“At the end, couldn’t make a play when we needed to,” Ole Miss coach Kermit Davis said. “But good college game in November.”

Memphis (5-1) snapped a three-game streak by Ole Miss in this series.

Hardaway has the youngest team in the country, according to KenPom.com. He still has the No. 1 recruiting class even with Wiseman sitting out an NCAA-mandated 12-game suspension for what college sports’ governing body ruled were impermissible benefits from 2017 when the Memphis coach was overseeing a local high school team.

Achiuwa also was a five-star recruit like Wiseman. He helped Memphis score the final seven points to take 45-38 halftime lead. Then the 6-foot-9 forward scored the first seven for Memphis in the second half, then the Tigers pushed their lead to 54-43 on a dunk by Jeffries with 15:57 to go.

“The rest of the team just has to step up and make up for James not being here and not being able to play,” Achiuwa said.

Ole Miss responded with a 17-6 run to turn a runaway into a thrilling finish. With 5 seconds left and Memphis up 85-82, Breein Tyree thought he’d gotten a shot off when fouled by Tyler Harris. Officials sent Tyree to the line for two free throws instead of 3. Tyree split the free throws before Jeffries’ dunk.

“It was kind of a bang-bang play,” Davis said.

Davis has three starters back for Ole Miss from his NCAA Tournament team last season. Tyree led Ole Miss with 24 points. KJ Buffen had a team-high 13 before fouling out with 10:10 left, and Hinson had 15.

Harris had 15 and Alex Lomax 14 for Memphis.

Ole Miss: The Rebels held each of their first four opponents below 60 points and led the SEC by allowing just 31.9% shooting, which was fourth nationally. They had little answer for Memphis’ inside scoring except for getting into foul trouble. ... Their 3-pointers fell early as they hit five of their first six for an early lead. The Rebels finished 12 of 27 from 3.

Memphis: The young Tigers are very good with layups and high-flying dunks, outscoring Ole Miss 52-20 in the paint. But they’re going to have to show at some point they can take, and make, 3s to keep opponents from packing the paint defensively. They hit only 3 of 11 outside the arc, with Harris hitting all three.

Hardaway says he had a long talk with Achiuwa on Friday with the freshman wanting to score more early this season. Against Ole Miss, Achiuwa came through with five defensive rebounds. He also had three turnovers but three steals and two blocks.

“I know who he could be and where he wants to go,” Hardaway said. “Where he wants to go, he has to do the things like he did today. He locked in and never took his eyes off of it from the beginning of the game until the end. It showed who he really is to the country.”

Ole Miss: Penn State on Wednesday in Brooklyn at the NIT Tip-Off.

Memphis: North Carolina State on Thursday in Brooklyn at the Barclay Center Classic.