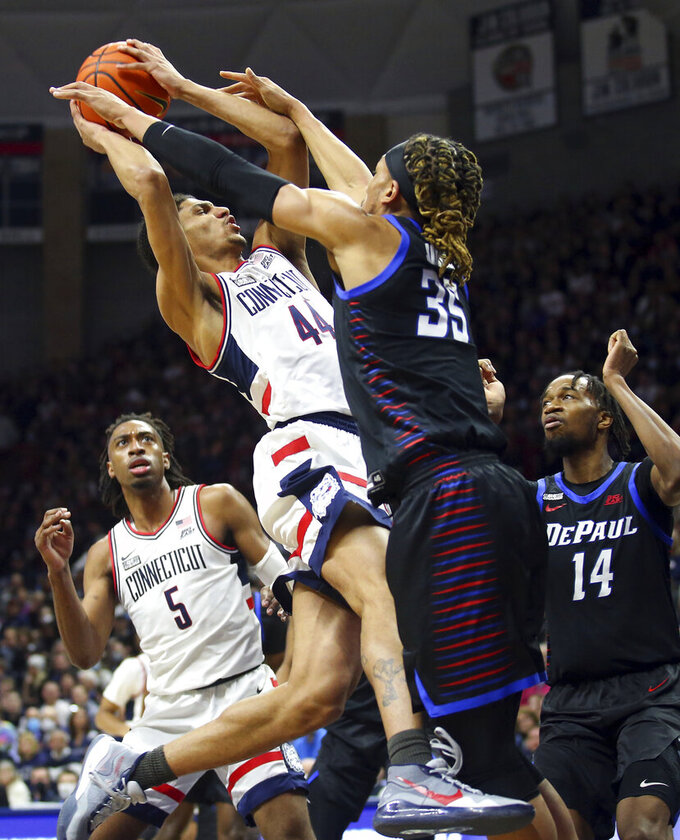 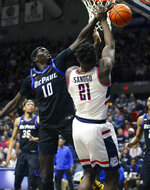 STORRS, Conn. (AP) — Adama Sanogo was not pleased with his recent performance, and the UConn center decided to take out his frustrations on DePaul.

Sanogo scored 26 points as No. 18 UConn beat DePaul 75-68 Saturday in the regular-season finale for both teams.

“An angry Adama is hard to deal with,” UConn coach Dan Hurley said. “His track record coming off a sub-par game is pretty good. He responds very, very well to not being at his best.”

Sanogo also had 11 rebounds, giving him his eighth double-double of the season. He admitted that he was playing a bit mad against the Blue Demons.

“After the Creighton game we came back and we were watching the film. I didn’t like the way I played,” Sanogo said. “Coming into this game, I was mad at myself.”

“Any time you get beat on the boards by 18, that’s not a formula for success,” DePaul coach Tony Stubblefield said.

Javon Freeman-Liberty led DePaul with 22 points, while Brandon Johnson had 14. DePaul (15-15, 6-14) had won three straight games, with Freeman-Liberty averaging 30 points per game over that span.

With its win, UConn secured the No. 3 seed in the upcoming Big East Tournament. DePaul will be No. 10.

UConn has won 14 straight in the series, including two this season, but the final minutes of this one was more tense than usual.

UConn took a 40-29 lead at halftime, with Sanogo scoring half of the Huskies’ points. The sophomore, who on Friday was named a finalist for the Kareem Abdul-Jabbar Award as the nation’s top center, went 9 of 11 from the floor and added seven rebounds in the first half alone.

“We didn’t do a great job on Sanogo, especially in the first half,” Stubblefield said. “He’s a load down there. You let him catch it deep and let him get to his left shoulder, he’s hard to deal with.”

Sanogo had 12 points and six rebounds, making six of his eight shots, in the game’s opening eight minutes as UConn took a 16-10 lead.

Freeman-Liberty missed six of his first seven shots and the Blue Demons struggled to stay with the bigger Huskies on the backboards.

Six more points in the paint, including Sanogo’s eighth field goal, were part of a 6-0 run later in the half that gave UConn a 35-24 edge.

UConn had designs on claiming a Big East regular-season title this year but finished third and now is trying to refocus quickly on the postseason.

“Our goal was to win the regular-season championship, but we didn’t get that," Martin said. "There’s still another ring to get. The regular season is over and now we enter a new season, ’chip season. There’s two championships ahead of us we can win, so we’re going to go out there and try to win those.”

UConn: Having already clinched a bye in the upcoming Big East Tournament, it was largely a day for UConn to celebrate. It was Senior Day and the Huskies honored five players who likely were playing their final home games: R.J. Cole, Isaiah Whaley, Tyler Polley, Tyrese Martin, and walk-on Matt Garry.

DePaul: DePaul was trying to win four straight conference games for the first time since its final year in Conference USA in 2004-05.

No. 18 UConn might slip down a spot or two after losing to Creighton earlier in the week, but its position won’t change much.

UConn: Will be the No. 3 seed in the Big East Tournament, opening play Thursday in the quarterfinals.

DePaul: Will be the No. 10 seed in the Big East Tournament, playing Wednesday against St. John’s in the opening round.