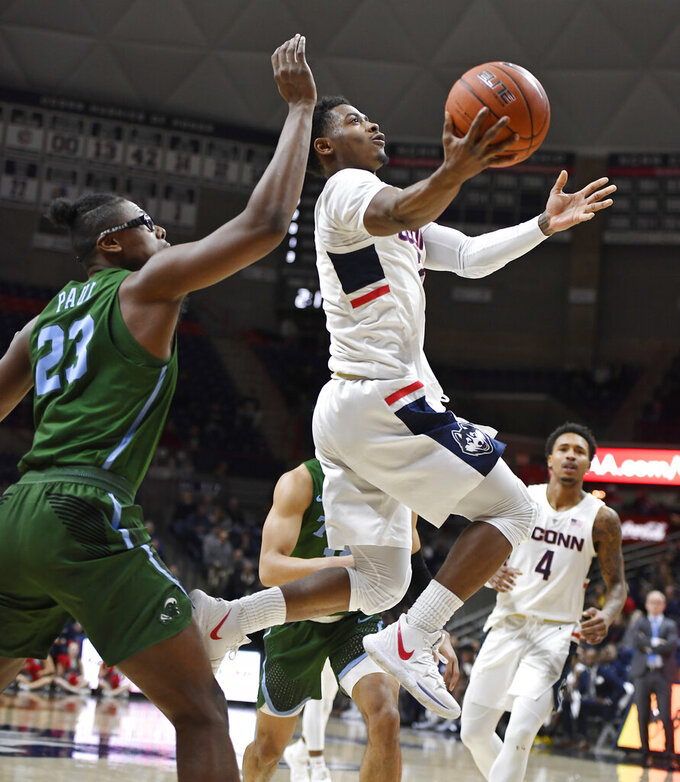 Connecticut's Alterique Gilbert (3) goes up to the basket as Tulane's Blake Paul defends during the first half of an NCAA college basketball game, Saturday, Jan. 19, 2019, in Storrs, Conn. (AP Photo/Jessica Hill) 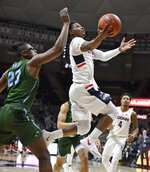 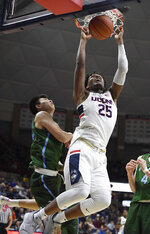 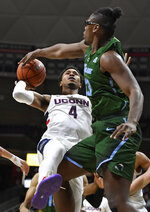 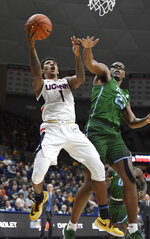 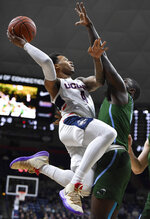 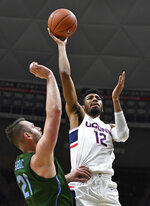 STORRS, Conn. (AP) — UConn hasn't had many comfortable wins in conference play over the past two seasons, but the Huskies showed Saturday they can dominate when they are clicking.

"This is a challenging program, it's a program that is used to winning," said Vital, who reached 1,000 points for his career with a 3-point shot in the first half. "When we signed up to come here, we should have known what the responsibilities were coming to a program like this. I think guys are growing up and we're maturing and we're just starting to gel as a unit. Hopefully tonight was an indication of more things to come"

Caleb Daniels had 21 points for Tulane (4-13, 0-5) which has lost seven straight and eight of nine. Samir Sehic and Blake Paul each added 13 points for the Green Wave.

Adam's double-clutch shot in the lane after a turnover gave UConn a 21-point lead with just under five minutes to play, effectively putting the game out of reach.

"We just fixed our mindset and stopped worrying about offense," Adams said. "We just directed our efforts to the defensive end and knew that was where we kind of have to take the challenge."

Carlton opened the game with a layup and the Huskies ran out to a 9-2 lead. They built that to 14 before Tulane began chipping away.

A driving layup by Jordan Cornish cut the deficit to 35-30 and Tulane trailed 37-30 at halftime.

The Green Wave shot 49 percent from the floor, but was just 3 of 16 from 3-point range.

"We have to control the tempo of the game more and we've got to finish the opportunities we have," said Tulane coach Mike Dunleavy. "Shot selection is paramount."

The game was moved up several hours from a planned 7:30 p.m. start to avoid a winter storm that was forecast to move into the area.

Tulane: The Green Wave has never beaten UConn, falling to 0-7 against the Huskies.

UConn: UConn needed some good news this week after announcing Thursday that its athletic division lost more than $40 million last year, including more than $5 million in men's basketball. On Friday, the school self-imposed sanctions on the program for NCAA violations under former coach Kevin Ollie. Those will include the loss of a scholarship next season. The NCAA has not said if it will impose other penalties.

"It's been a tough week," coach Dan Hurley said. "There's been a lot swirling around. Eventually it'll be behind us and UConn will be back to doing what UConn does. It's just going to take us a little bit of time to get there."

UConn 3-point specialist Tyler Polley went 0-3 from behind the arc and is now just 4-for-26 from 3-point range in conference play.

UConn forward Sidney Wilson did not play after sitting out the last two practices with a sore thumb and sprained ankle. Hurley said the injuries are not serious.

"If he doesn't play next Saturday, then dudes from the Bronx are soft," Hurley joked. "He'll know that because I'm going to say it all week."

Hurley said when Tulane cut the lead to three points, his message to the Huskies was simple.

UConn: The Huskies have a week off before another game at Gampel Pavilion next Saturday against Wichita State.