After mental health break, a turnaround at Detroit Mercy 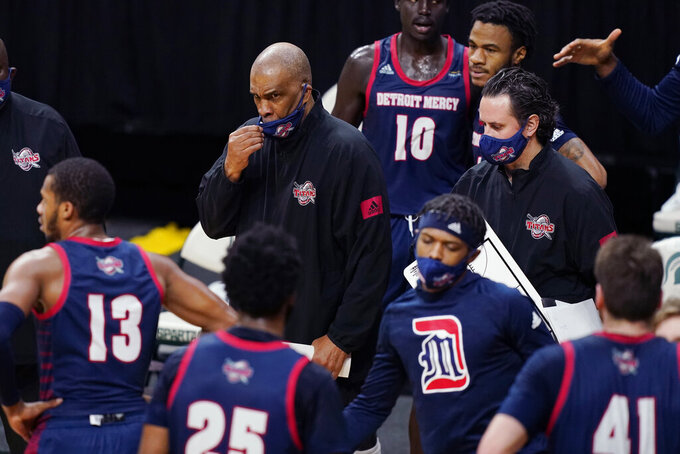 FILE- In a Dec. 4, 2020 file photo, Detroit Mercy head coach Mike Davis prepares to talk to his team during the first half of an NCAA college basketball game against Michigan State, in East Lansing, Mich. In a college basketball season unlike any other, players have had to adjust to coronavirus protocols and just general anxiety about what's to come. Even for those who manage to avoid catching the virus, the mental strain can be a real issue. Detroit Mercy's men's basketball program paused activities earlier this season, citing the mental health of its players. (AP Photo/Carlos Osorio, File)

DETROIT (AP) — Detroit Mercy’s men’s basketball team began the season with three games in five days. A week later, a matchup with Kentucky was canceled. Then on the last weekend of December, there was some uncertainty about whether a couple games against rival Oakland would be played.

They were, but Detroit Mercy coach Mike Davis wasn’t happy about it.

“I said enough is enough,” Davis recalled. “We’re taking some time off.”

After the two games against Oakland, the Detroit Mercy program paused activities, citing not positive COVID-19 tests or contact tracing issues but the mental health of its athletes. The Titans didn’t play another game until Jan. 15. Since then, they’ve found their stride, winning 10 of their final 12 regular-season games going into Thursday night's game against Robert Morris in the Horizon League Tournament.

In this season unlike any other, players throughout the country have had to adjust to coronavirus protocols, scheduling uncertainty and just general anxiety about what’s to come. Many have been largely isolated on campuses that are far emptier than normal.

Even for those who avoid catching the virus, the mental strain can be a real issue.

“We don’t have the normal balance of our lives that we usually do, while being concerned about not getting COVID and trying to be as healthy as you can be and control what you can control,” Iowa star Luka Garza said. “It’s definitely been a different year than any other for all of us.”

An NCAA study conducted in the fall on the well-being of athletes shed some light on the challenges they face during the pandemic.

“Student-athletes reported fewer sleep difficulties and lower levels of loneliness, loss, anger and sadness in fall 2020 than at the outset of the pandemic,” the study said. “However, similar to spring, elevated rates of mental exhaustion, anxiety, hopelessness and feelings of being depressed were reported.”

Davis said he thought playing some games would be good, but that can create stress of its own — something as simple as staying at a hotel takes a different toll than it did a year ago.

Then there were the two games against Oakland at the end of December. Davis was concerned because of a game the Golden Grizzlies had played shortly before that.

“We found out that the referee that was in that game had the virus, and then we had to play Oakland six days later,” Davis said. “Our guys did not want to play, I didn’t want to coach, and you could just see it in them.”

Oakland coach Greg Kampe said at the time that he didn’t want to play the games either, but they were held. Detroit Mercy lost both, falling to 1-7 on the season. Then the Titans took their break.

It wasn’t a completely unusual move. Earlier in December, Duke canceled its remaining nonconference games to help players spend time with family over the holidays.

At Detroit Mercy, Davis felt the virus was wearing on his team in a variety of ways.

“You have the threat of someone getting it every day, anybody. Most people who get it don’t know where they got it from,” he said. “I think that our fans have been really patient with us, and our administration, our AD is just unbelievable.”

The pause was initially supposed to be a week and wasn’t due to any positive tests in the program. Davis said there was eventually a positive test, and the Titans didn’t play Milwaukee the weekend of Jan. 9 as planned. They returned the following week against Green Bay.

Since coming back, the Titans have had only conference games, and they were all on Fridays and Saturdays. Those back-to-backs weren’t necessarily easy, but they allowed the team to establish a sense of routine.

Davis said the Titans would play their games, then take Sunday off. Then they’d practice Monday and Tuesday before another day off Wednesday.

Marquell Fraser, a guard for Detroit Mercy, said the lengthy break did have some drawbacks — any time away from the court can make it tough to build team chemistry. But he said it has been helpful to have a consistent schedule from week to week — something that wasn’t the case during the nonconference season.

“Going into every week, we all know what to expect,” Fraser said. “We all know that we’re going to be playing Friday, Saturday, Sunday off, and after that, Monday we’re back to work. I think it is good just knowing your set schedule for the rest of the week.”

Of course, now Detroit Mercy begins the conference tournament with its first Thursday game of the entire season. But the Titans have a lot of reasons to feel optimistic. They not only made it through the regular season, they now look like a threat in the Horizon.

And Davis has learned a few things from this experience that might be useful even in a non-pandemic year.

“You realize that you can give guys off days. Sometimes, coaches, we’re so nervous about not being in the gym and not practicing,” he said. “But two days on and one day off, we’re playing better than we ever played.”