After NCAA run, Saint Peter's will always have the memories 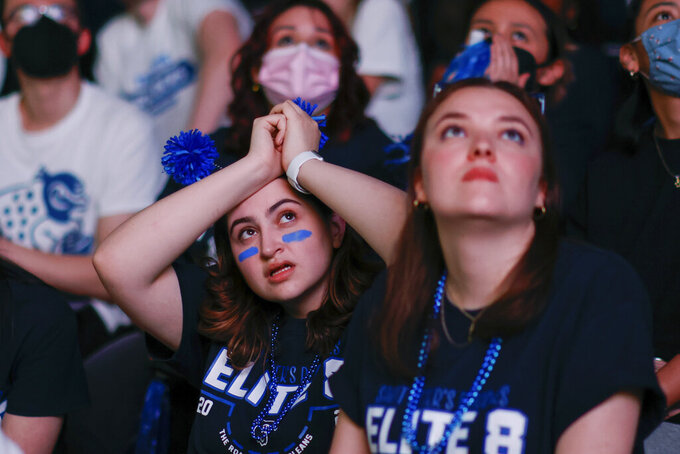 JERSEY CITY, N.J. (AP) — Saint Peter's unexpected and uplifting run to the Elite Eigh t ended with a bus ride back to New Jersey and the unsettling prospect Shaheen Holloway might have coached his last game for Peacocks.

“To be honest, it was amazing to me,” forward Hassan Drame said of the experience in the student center on Monday. "Overall, it was an amazing season and something that we’re going to look back on, and forever where we go we have this story to tell people.”

It was a great story. A little Jesuit university in Jersey City, making just its fourth NCAA Tournament appearance and first since 2011. A program that had never won a game in The Show, knocking off perennial powerhouses Kentucky and Purdue and a very good Murray State squad to become the first No. 15 seed to reach the Elite Eight.

The feel-good story of the NCAA Tournament ended Sunday as the Metro Atlantic Athletic Conference tournament champions were blown out 69-49 by North Carolina.

All the players on the team are eligible to return.

“At this point, we don’t know what the future hold for us,” Drame said. "But, you know, we are always proud to be Peacocks.”

Jersey City is also proud. Mayor Steven Fulop said Monday a parade will be held on Friday afternoon to honor the team and keys to the city will be given out.

The major question mark is Holloway. The 45-year-old coach is a former Seton Hall player and that job opened a week ago when Kevin Willard accepted the top job at Maryland. Willard was making roughly $2.4 million coaching at the Big East Conference school in nearby South Orange.

While his salary at Saint Peter's has not been disclosed, Holloway is believe to be getting less than $300,000 annually.

“We don’t know nothing about that tactic,” Fousseyni Drame, Hassan's twin and a fellow forward, said of Holloway's future. “Nobody knows what the future holds.”

Holloway, university president Eugene Cornacchia and athletic director Rachelle Paul were not on campus Monday. Paul did not return an email from The Associated Press seeking comment on Holloway's future.

Around campus, life seemed to be returning to normal. There were only a couple of television crews and few reporters. Freshman Jamie Troutman of New Haven Connecticut, said the tournament success united the community.

“It was nice seeing everybody come together to celebrate something so big and making history,” the psychology major said.

Jennifer Dang, a freshman from Middlesex, New Jersey, said while it was sad seeing the team lose Sunday, she said the watch parties on campus made everyone feel like they were at the games.

“I’m definitely proud of the boys,” she said. “They made it far, regardless of where we ended or how we started. They made it really far.”

Furlop said the team had all the attributes of the city.

“I think everyone across the country identified with this team,” he said. “They didn't get a lot of recognition. There were not highly recruited and they came together. They were the little engine that could, knocking off all these big powerhouses.”

On Monday, Mark McIntyre and his son, Matthew, were on campus taking a picture of a donor sign on the wall near a cafe. They had been in New York City on Sunday for a Nets' NBA game and decided to take a look at Saint Peter's after seeing the Peacocks in the tournament.

“We wanted to come by the campus and get a tee-shirt or hoodie and they are all sold out, crazy,” Mark McIntyre said. “It's all because of the Elite Eight run, that's why we're here."

When McIntyre speaks, it’s with an audible drawl. Home is Rogersville, Alabama. The script A on his stocking cap is another giveaway. McIntyre was caught off guard by the size of the university with an undergraduate enrollment of just 2,100 students.

This year, size didn't matter at all to Saint Peter's.