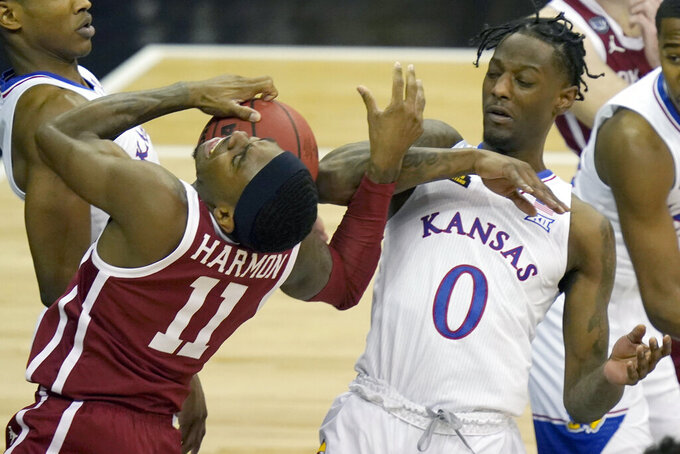 KANSAS CITY, Mo. (AP) — Kansas was never rattled when it learned that big man David McCormack and backup forward Tristan Enaruna had been caught up in COVID-19 protocols, knocking both of them out for the entirety of the Big 12 Tournament.

The Jayhawks weren't rattled after blowing most of a 20-point halftime lead against Oklahoma, either.

Ochai Agbaji scored a career-high 26 points, Marcus Garrett added 17, and the 11th-ranked Jayhawks leaned on their smaller lineup and fill-in big man Mitch Lightfoot to make enough plays down the stretch and escape with a 69-62 victory over the 25th-ranked Sooners in the quarterfinal round Thursday night.

“I really didn't say anything,” Jayhawks coach Bill Self said upon learning McCormack and Enaruna were out. “I don't think the guys thought, ‘Oh, no.’ They probably thought, ‘Well, this is going to be a little harder now.’”

It wasn't in the first half, when the second-seeded Jayhawks (20-8) raced to a 35-15 lead. But that was probably the case when the seventh-seeded Sooners (15-10) closed within 62-59 with 3 1/2 minutes to go, when Elijah Harkless followed a miss by Austin Reaves with a bucket of his own to raise the intensity a notch inside T-Mobile Center, which had roughly 3,000 fans inside.

Kansas buckled down defensively, though, and the Sooners didn't get another field goal until the final minute. By that point, the Jayhawks were on their way to playing No. 13 Texas in the semifinals Friday night.

“The first half we were great. We got everything we wanted,” Self said. “The second half we didn't play nearly as well, but they were as good as we were the first half in the second half. They made shots and we made some bonehead plays.”

Reaves and Brady Manek scored 19 points apiece to lead Oklahoma, which ended a four-game skid with its first-round win over Iowa State but couldn't capitalize on the momentum. Harkless added 15 points before fouling out.

“You can't have a half like that against a really good ballclub,” Oklahoma coach Lon Kruger said. “I'm proud of our guys' response. they came out the second half much more like themselves — moved the basketball, made plays for each other, played better on each end of the floor. But we dug a big hole for ourselves and couldn't get out of it it.”

Without McCormack at his disposal, Self opted for a four-guard starting lineup with nobody taller than 6-foot-8 forward Jalen Wilson, and the smaller Jayhawks spent the first half buzzing around Oklahoma's backcourt like a bunch of gnats.

After Manek gave the Sooners a 6-4 lead in the opening minutes, they only managed one more field goal — a 3 from Manek — over the next 10 minutes. And after Reaves curled in another 3-pointer to get them within 18-12, the Sooners went six more minutes without another field goal.

Oklahoma was 6 of 20 from the field with 13 turnovers, and its 15 points set a season low for scoring in a half.

It may have taken the Sooners 20 minutes to dig a 20-point deficit, but they needed just 10 to erase most of it.

The Jayhawks grew stagnant on offense with Agbaji and Garrett the only ones able to get anything to go, and their once-stingy defense became downright generous. Manek and Reaves took advantage of the newfound open looks with a barrage of 3-pointers, which opened up the lane for Harkless and De'Vion Harmon to slice to the basket.

By the time Reaves drilled a 3-pointer with 5 minutes to go, and Harkless followed Reaves' miss with a layup a few minutes later, the Sooners were within 62-57.

Mitch Lightfoot's basket with 2:22 left was the first in the second half by anybody but Agbaji and Garrett for Kansas, and Garrett answered Reaves' free throw moments later with one of his own to make it 65-60 with 1:36 to go.

Reaves misfired from the top of the arc on the Sooners' next possession, allowing Kansas to hang on during the final minute.

“Coach did a good job of keeping us confident, playing with a free mind,” Agbaji said. “We all know we don't have our David, throwing the ball in the post, but we just kept aggressive on the outside, kept shooting and kept being confident about it.”

Oklahoma finished with a season-high 18 turnovers. The Sooners also got just four points off the bench, and their inability to take advantage of McCormack's absence in the paint was noticeable all game.

Kansas has struggled at the foul line much of the season, but Self's team was 9 of 11 from the stripe Thursday night. Wilson made a couple free throws in the final seconds that ultimately sealed the victory.

The Jayhawks will face Texas for a spot in the championship game.