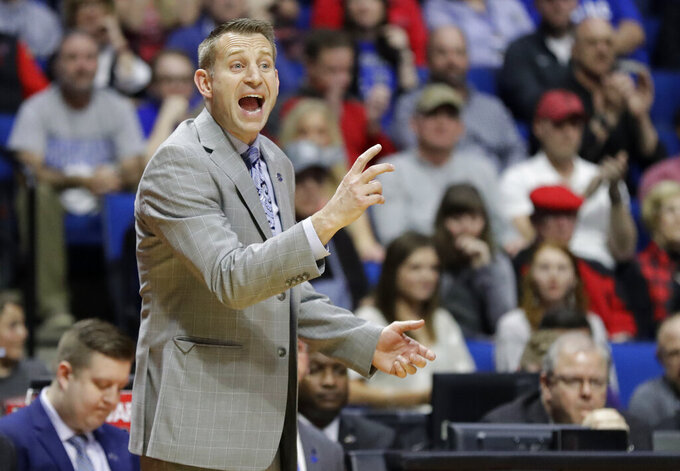 Buffalo head coach Nate Oats is seen on the sidelines during the first half of a second round men's college basketball game against Texas Tech in the NCAA Tournament Sunday, March 24, 2019, in Tulsa, Okla. (AP Photo/Jeff Roberson) 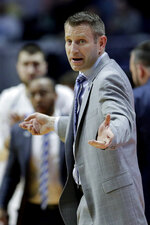 The Crimson Tide hired Oats on Wednesday after he led the Bulls to their best season and a third NCAA berth in four years.

Athletic director Greg Byrne turned to Oats three days after parting ways with Avery Johnson in what he described as a mutual decision.

"I have been watching coach Oats for the last few years as he has led the University at Buffalo to unprecedented heights," Byrne said. "His commitment to developing the student-athlete both on and off the court was what really stuck out.

"As we spoke to some of the best college and pro basketball minds in the country, his name came up time and time again."

Oats takes over a program that has only made the NCAA Tournament once since 2012.

Johnson, a former NBA head coach and player, went 75-62 in four seasons with one NCAA Tournament berth in 2018. His final Alabama team faltered down the stretch last season and lost to Norfolk State in the opening round of the NIT.

Oats, the Mid-American Conference coach of the year each of the past two seasons, turned Buffalo into a top mid-major program and had no such issues making the NCAA field.

He went 96-43 with the Bulls and won three MAC Tournament championships, including the last two regular season and tournament titles. They went 32-4 last season and won a first-round NCAA Tournament game for the second straight year.

It's unclear how much of the latest Tide team he'll have to work with. Alabama guard Dazon Ingram has already announced plans to leave as a graduate transfer. Leading scorer Kira Lewis Jr., starting guard John Petty and reserve Daniel Giddens have all entered the NCAA transfer portal, according to reports.

Buffalo announced on March 14 that Oats had signed a five-year contract extension that would make him the top-paid coach in the Mid-American Conference. He was set to make $837,000 annually through the 2024 season.

In January, Oats dismissed the notion that he would leave Buffalo simply for a hefty contract at a larger school.

"Like, everybody assumes: 'Coach Oats, you're having a great year. You're not going to be here much longer.' And I'm like, 'Why not?'" he told AP. "Just because somebody puts $2 million on the table doesn't mean I have to take it. I get to make that decision. It's my life. I like it here a lot."

But he couldn't turn down an opportunity to take over a Southeastern Conference team, even one often overshadowed by a powerhouse football program. Alabama didn't release terms of his contract.

Oats spent his first two years in Buffalo as Bobby Hurley's No. 1 assistant and top recruiter. A former high school coach in suburban Detroit, he was promoted to head coach shortly after Hurley left for Arizona State.

In four seasons under Oats, the Bulls played with an up-tempo, free-wheeling style that leaned on scoring off the transition.