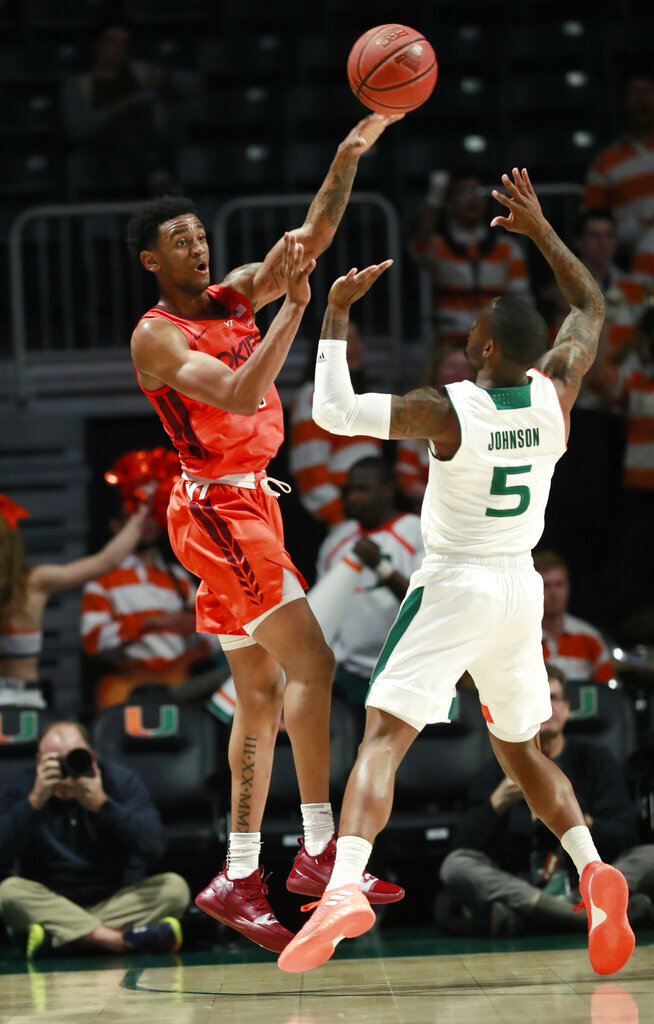 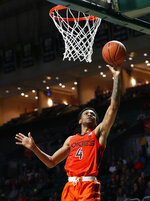 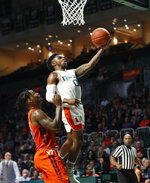 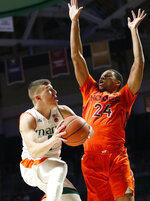 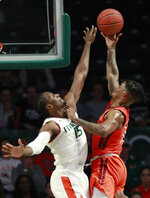 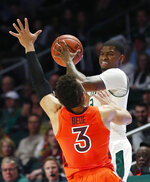 CORAL GABLES, Fla. (AP) — Virginia Tech star guard Justin Robinson sat at the end of the bench with his left foot in a boot as the final seconds ticked off the clock, which tempered the Hokies' swagger following a resounding road win.

Nickeil Alexander-Walker tied a season high with 25 points and added a highlight-reel assist as No. 12 Virginia Tech shot 59 percent to beat Miami 82-70 on Wednesday night.

Robinson scored 17 points but appeared to hurt his left ankle and limped to the locker room midway through the second half. He watched the final minutes from the sideline, and Hokies coach Buzz Williams declined to discuss the nature or severity of the injury.

"After the game we said a prayer," Alexander-Williams said. "Hopefully it's not bad. We're just waiting for some good news."

Virginia Tech (17-3, 6-2 Atlantic Coast Conference) closed within one game of the league lead, but now it might be without Robinson, who holds the school record for career assists and scored a career-high 35 points last week against Syracuse.

"They're a much different team if they don't have him," Miami coach Jim Larranaga said.

The Hokies are already so short-handed they used just seven players, and two played more than 39 minutes.

"We're not on the same page offensively," Larranaga said.

There were nine early lead changes, but Tech went ahead for good thanks to a 10-0 run midway through the first half.

The Hokies forced three turnovers with full-court pressure to spark an 11-3 surge in the first 2:19 after halftime. The spurt included a fluky but dazzling alley-oop assist on a fast break by Alexander-Walker, whose pass went straight up as a trailing Robinson leaped for the catch and dunk.

"The ball slipped," Alexander-Walker said. "It was not intentional."

Alexander-Walker shot 11 of 17, including 3 for 7 from beyond the arc, and added five assists and four rebounds in 39 minutes.

The Hokies forced 17 turnovers, which led to 22 points. Transition baskets helped them outscore Miami 32-16 in the paint.

Hurricanes guard Chris Lykes, who missed all 12 shots in their last game, bounced back by scoring 19 points.

"He's going to be really effective when his teammates are playing well," Larranaga said.

It was Miami's first game since the NCAA ruled forward Dewan Hernandez must sit out the remainder of the season because of his dealings with an agent. Hernandez said he's withdrawing from school and will turn pro, but Larranaga said the junior is still attending classes, practice and team meetings, and is undecided about his future.

"He's got some career decisions to make," Larranaga said.

Hurricanes guard Anthony Lawrence had 15 points and nine rebounds but sustained a hip flexor and was limited to 29 minutes.

The Hurricanes fell to 0-5 against ranked teams. They're 19-40 versus ranked teams under Larranaga.

Virginia Tech improved to 5-11 at Miami.

The Hokies play Saturday at No. 23 North Carolina State, which is coming off an overtime loss against Virginia.

Miami, in a stretch that includes facing four ranked teams in five games, plays another at No. 3 Virginia on Saturday.