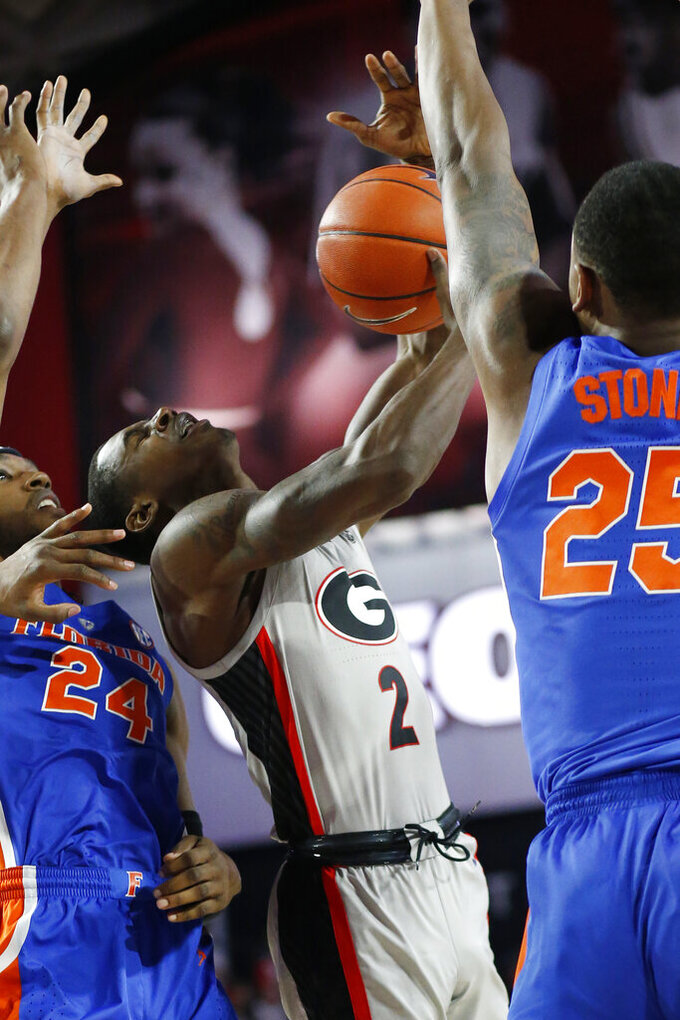 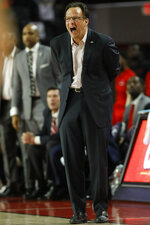 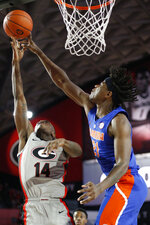 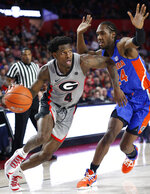 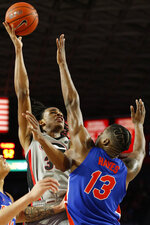 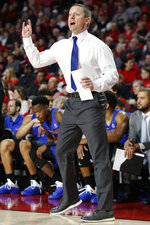 ATHENS, Ga. (AP) — Kevarrius Hayes saw no reason to worry even as Florida was letting another second-half lead fade away.

"Trailing by five, we had a lot of fight in us," he said. "We understand the game is nowhere near over until the final buzzer. The game of basketball can change quickly."

After losing to South Carolina, No. 3 Tennessee and No. 24 Mississippi State by an average less than five points, Florida (10-7, 2-3 Southeastern Conference) closed out the game by holding Georgia without a field goal for over nine minutes at the end of the second half.

Rayshaun Hammonds, Georgia's leading scorer this season, was held without a point for the second time in the last five games. Second-leading scorer Nicolas Claxton had nine points and 12 rebounds.

Jordan Harris, taking Turtle Jackson's spot in the starting lineup, had 10 points and was the only Bulldog to finish in double figures. It was an agonizing afternoon for Georgia (9-8, 1-4), which shot 5 for 14 beyond the arc and is 9 for 41 on 3s in the last two games.

The Bulldogs were outscored 28-10 in points off turnovers.

"We can just continue to drill on that and make sure guys secure the ball when they catch it and protect it because guys are swatting down trying to take it from you," Harris said. "I think we've got to be aware of our surroundings when we catch the ball."

Georgia, which has lost three straight and four of five, led by five on Harris' reverse layup with 9:38 left in the game, but they didn't score another field goal until 22 seconds remained.

The Bulldogs pulled within four midway through the first half before the Gators pushed the lead to 13 on Keith Stone's dunk and Mike Okauru's 3. Florida's zone defense was active with four different players blocking a shot and holding Georgia to six field goals.

"I thought our body language, our mental toughness — I saw a little bit of difference (today), especially defensively," Gators coach Mike White said. "I thought we sat down in a stance and didn't hope for stops. Instead we decided to get them."

Florida: Johnson had eight points and seven rebounds in his first career start. He joined Locke and Andrew Nembhard to give the Gators three freshmen in the lineup. ... Johnson replaced G Jalen Hudson, who had three points and four fouls in 11 minutes. ... Stone hit the floor hard in the first two minutes of the second half as he fouled Harris on a Georgia fast break. After writhing in pain for a couple minutes, Stone was helped off the floor and into the locker room with an undisclosed injury and didn't return. ... Allen has scored in double figures in 10 of the last 11 games. ... Locke had his eighth straight game in double figures, the most by Florida freshman since Bradley Beal had 10 straight in 2011-12.

Georgia: Jackson did not start for the first time this season and finished with six points in 16 minutes. It was Harris' first career start. ... The Bulldogs announced their third sellout of the season and have four more games with no tickets remaining at the 10,523-seat Stegeman Coliseum.

The school announced that Georgia coach Tom Crean's mother, Marjorie Crean, passed away this week in Michigan following a long illness. She was 80. Funeral arrangements are pending, but Crean will not miss a game.

Georgia: At LSU on Wednesday.