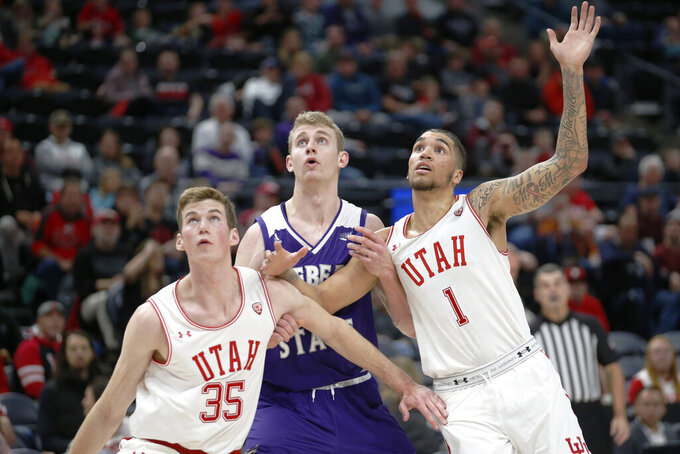 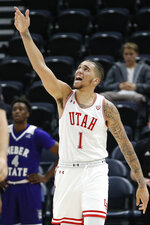 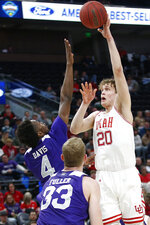 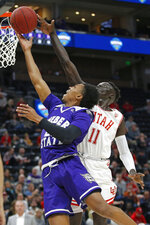 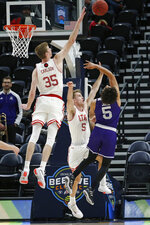 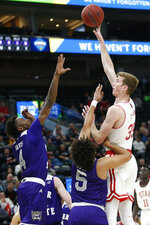 SALT LAKE CITY (AP) — Timmy Allen was missing his point guard and shots were clanging off the rim. Nothing was coming easy.

"It was an ugly one, especially down the stretch but I'm glad we could tough it out," Allen said after he scored 19 points to lead Utah past Weber State 60-49 in the Beehive Classic on Saturday.

Riley Battin added nine points and 10 rebounds and Mikael Jantunen and Branden Carlson each had nine points for the Utes (8-2), who played without starting point guard Rylan Jones.

Jerrick Harding scored 17 points, Cody John had 15 and Kham Davis contributed 11 for the Wildcats, who fell to 3-6.

Utah led 31-25 at the half after overcoming an early six-point deficit. After the break, Battin scored four quick points, Carlson dunked and the Utes never relinquished a double-digit lead the rest of the way.

In the second half, both teams had a hard time finding the bottom of the net as they combined to shoot 2 for 18 during one stretch.

Jones, who was second on the team in minutes played, was out with bruised ribs. That may have contributed to Utah shooting just 34% after making more than half their shots this season.

"It's different without Rylan. He does a lot of things for us, both on offense getting people shots but he's key defensively too," said Both Gach, who played 36 minutes at the point and had eight points, six rebounds and three assists.

But the Utes got buckets around the basket and if they missed, they tallied 11 points in the second half on second chances to go along with a 47-34 rebounding advantage.

On the other side, the Wildcats finally have a mostly healthy team after a rash of injuries at the beginning of the season but haven’t been able to find an offensive rhythm.

Preseason Big Sky MVP Harding averaged 28 points in Weber State’s two wins last week but didn’t start scoring until the Wildcats were down big in the second half.

"I just feel like we didn't hit shots tonight. That was the biggest thing," Harding said. "I feel like a lot of them were wide open. That's on us."

The Wildcats had 14 missed layups and dunks against Utah’s extraordinary length. The Utes’ aggressive switching defense on Weber State’s perimeter screens kept the Wildcats off balance.

"I think their size affected us a little bit around the rim, but they're still open layups. And then in the second half, I didn't feel like we took a bad shot. We usually make those shots, but we didn't," Weber State coach Randy Rahe said.

CALM BEFORE THE STORM

"It's only going to get harder from here," Allen said. "It's going to be fun. I'm looking forward to it. I think we're built for it. We just got to be poised."

The Utes haven't faced a Top 25 opponent yet.

Seeing as the Utes are playing Kentucky in Las Vegas, Utah coach Larry Krystkowiak said, "It's a different level of poker stakes. We're going to be playing at a different table. I'm pleased that we've played ten games and win eight of them, but this next stretch is a different animal. I don't think we'll be a favorite anytime soon."

BEEHIVE WON’T BE BACK

The three-year experiment of the Beehive Classic is over. The annual doubleheader featuring Utah’s top four basketball schools at the Vivint Smart Home Arena, the home of the Utah Jazz, didn’t ever capture the imagination of fans. Instead of the intensity of an in-state rivalry, the arena was filled to just a quarter of the lower bowl with fans in a huge arena that had the buzz of an exhibition contest.

The matchup was the first for the Wildcats and Utes since 2011 after a legacy of playing each other nearly every year. Utah now leads the series 27-14.

Weber State: Against a defense with some length and athleticism like Utah’s, the Wildcats had a hard time generating good shots and making them. They converted just 33% of their field goals and got nothing in the mid-range as the Utes ruled the paint and harassed the Wildcats on the 3-point line.

Utah: The youth of the Utes— with no seniors and just three juniors — was apparent again, as it has been through the early part of the season, with unforced turnovers and poor shot selection early in the game and again late. But Utah did enough on defense to win their fourth straight as they denied Harding good looks until the end of the game.

Allen explained their game plan. "Just take him out as much as possible. Deny him. Don't let him touch it," Allen said.

Utah: Plays No. 8 Kentucky in Las Vegas on Wednesday.