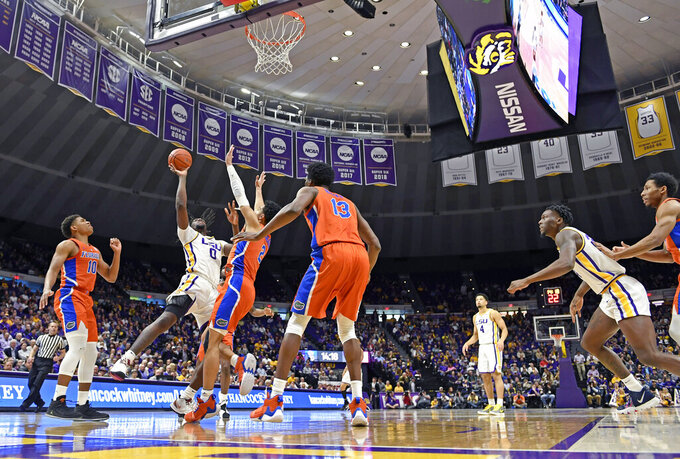 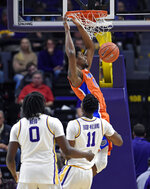 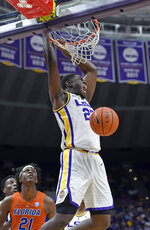 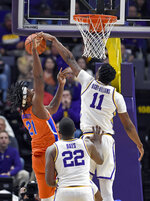 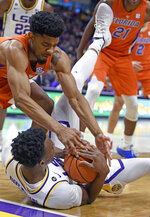 BATON ROUGE, La. (AP) — When Florida's Kevaughn Allen pulled up for an open 3 early in the second half at LSU, he'd been limited to just three shots and had not scored a point.

Allen's fourth shot went down — a moment LSU coach Will Wade called "the biggest play of the game."

"He saw the first one go in and it was over from there," Wade said.

Allen scored 12 of his 21 points in overtime, highlighted by a pair of 3s late in the extra period, and Florida beat No. 13 LSU 82-77 on Wednesday night.

"We all struggle with it at times," White said. "He had a couple plays that he didn't make. And then he gets to the overtime period and he moves on to the next play, and he stays in the moment, keeps fighting. He made huge shots."

Jalen Hudson and Noah Locke each scored 15 for Florida (15-11, 7-6 SEC), which has won three straight on the heels of competitive losses to Kentucky, Auburn and Tennessee.

The victory over LSU was Florida's first over a ranked team after losses in its previous six such match-ups this season.

"This has got to be probably our biggest win," Florida coach Michael White said. "Great environment, a bunch of adversity and found a way."

Both of LSU's past two losses have come at home, and a number of fans could be seen leaving during a stoppage with 47 seconds left and LSU trailing by seven.

Although LSU wound up with a chance to tie the game in the final 20 seconds, Wade said he "would have left, too."

"It's embarrassing we've lost two home games," Wade said. "We're 7-0 in the SEC on the road and we've lost two (at home). I feel terrible for our fans. It's hard on people to work and put their money to come watch us play. It's sickening. Sickening. Absolutely sickening."

Skylar Mays scored 18 points for the Tigers, who saw the game begin to slip away when Allen's consecutive 3s gave Florida a 76-70 lead with 1:12 to go.

Tremont Waters, who has been LSU's leading scorer this season, struggled.

With the score tied in the final seconds of regulation, he badly missed a pull-up 3.

"We didn't do what we were supposed to do," Wade said. "We didn't execute there."

And when a late steal gave LSU a chance to tie the game with less than 20 seconds left in overtime, Waters again missed from 3 to finish 3-of-12 shooting, including 2 of 8 from 3-point range.

"They did a great job taking him away," Wade said. "Their point guard, (Andrew) Nembhard, played very, very well."

Waters finished with 10 points, as did LSU's Kavell Bigby-Williams and Marlon Taylor.

Florida: The Gators arrived in Baton Rouge still holding realistic hopes of securing enough big victories to make the NCAA Tournament. A road victory against one of the hottest teams in the country should help. The Gators again demonstrated their defensive prowess and ability to compete with the SEC's best. During regulation, Florida held LSU to nearly 19 fewer points than its average per game.

LSU: After winning each of their previous four games by five for fewer points, the Tigers were unable to pull out yet another nail-biter and moved to 3-2 in overtime this season. LSU also fell out of a tie with Tennessee for first place in the SEC and are now tied with Kentucky — a team they beat last week —for second.

"There's a certain type team that gives us a lot of problems and whenever our season ends, wherever that is, it's going to end just like this," Wade said. "It's going to be the same way because we just don't have some of that stuff to beat some of these teams and we're either going to develop that over the next couple weeks or that's how it's going to end. It's really that simple."

LSU: Hosts No. 5 Tennessee on Saturday.