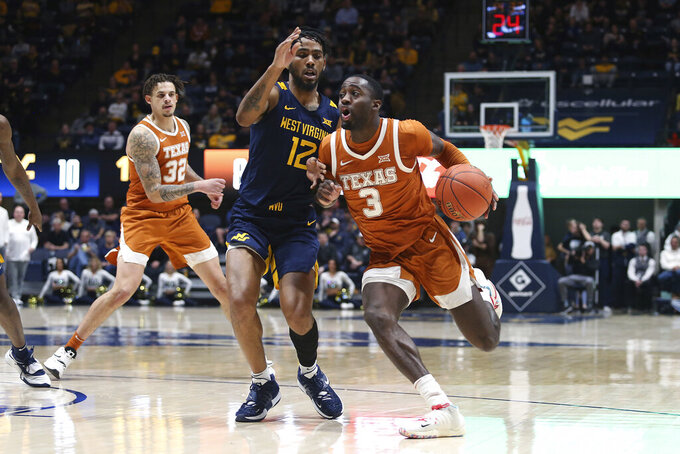 Allen scored 15 of his season-high 26 points over the final 10 minutes, and the 20th-ranked Longhorns beat the Mountaineers 82-81 on Saturday.

The forward was limited to eight points in a 74-59 win over the Mountaineers on Jan. 1.

“We were watching film from our first game against them and it didn’t even look like me," Allen said. "I looked passive and I looked not as strong, so I just wanted to come out and be aggressive.”

Allen’s brother, Teddy, was a popular backup player at West Virginia in 2017-18 before transferring after his freshman season. Timmy Allen said he doesn't know if that was a factor in how he performed Saturday, other than it helped him focus. He was eager after the game to call his sibling, who now plays at New Mexico State.

“I’ve been thinking about it all day," Timmy Allen said. “I mean, that’s my brother. That’s my best friend."

Texas trailed by 10 midway through the second half, but it rallied in time to earn its second straight win and improve to 4-6 on the road.

"That’s as happy as our locker room has been all year,” Texas coach Chris Beard said.

After starting the season 12-1, the Mountaineers have lost six straight and 13 of their last 14 games.

West Virginia was in position to post a big win. But Texas went ahead to stay on a 3-pointer by Febres with 4:38 remaining.

Texas lost the ensuing inbounds pass when the ball went out of bounds off Andrew Jones with 9 seconds remaining.

After a timeout, Sherman inbounded the ball to Curry, who missed a jumper from the top of the key.

“I don't know how you're going to get a better shot,” Huggins said.

Allen was fouled getting the rebound with 1 second left. He missed both free throws but West Virginia couldn’t get a shot off in time.

But the Longhorns were held to one field goal and committed five turnovers over the first six minutes of the second half, allowing West Virginia to gain momentum before Allen took over down the stretch.

Texas backup forward Brock Cunningham was ejected midway through the first half after a hard foul on Curry during a breakaway layup. It did nothing to throw off the Longhorns, who made 13 of their first 17 shots and cruised into halftime leading 43-37.

Texas: Despite committing 16 turnovers, the Longhorns won for the seventh time in the past nine meetings with West Virginia.

West Virginia: Huggins has seen stretches like this before. In the 2018-19 season, West Virginia lost 15 of 19 games to finish the regular season yet advanced to the league title game, where it lost to Kansas.

Texas: Hosts No. 10 Baylor on Monday, then finishes the regular season at No. 5 Kansas next Saturday. The Longhorns lost to Baylor and beat the Jayhawks in earlier meetings.

West Virginia: Travels to Oklahoma on Tuesday before finishing at home against TCU on Saturday.